Here's Karma laying claim to the blue cord strung across the livingroom rug. ;) 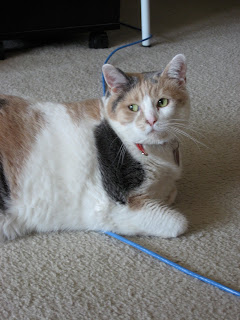 I had to show you this! Picture of record-breaking hail in our local paper: Vivian, South Dakota--8 inches across and weighing a pound! Whew! 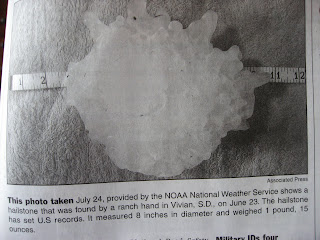 Well--Saturday plans changed. Dagan and Leah forgot that they were supposed to go to a play with her sister and BIL--so we switched to Sunday for dealing with the TV.
****
The young woman who wanted the TV--forgot! She's lucky I got lost in DVDs and flowers that night for a while and hadn't yet gone thru and picked the next person in line when she called at 9:20pm saying she had forgotten all about it. Said she'd come for sure on Sunday. (She did--with two strong guys--and the TV is gone!)
****
I started cutting a few more flowers with the new dies on Saturday. I decided to sort them by shape, of course, and put them in these little box parts inside of this bigger box. Used up some more scraps while I watched a couple of recommended DVDs. 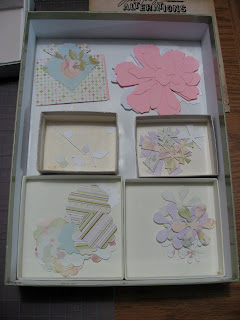 I watched Escape to Witch Mountain:
http://www.imdb.com/find?s=all&q=escape+to+witch+mountain
(Cute and old-fashioned, Tori!)
****
And The Ron Clark Story:
http://www.imdb.com/title/tt0473389/
(Inspirational, Serena!)
****
I decided it would be easier to put a link right to IMDB, where you could actually go see more about the movies I am talking about, rather than me cutting and pasting the summary from Netflix. Let me know if the links work and if you like this better, okay? :)
****
On Sunday--as I mentioned, the giant TV left and then Dagan & Leah arrived. Karma stayed out on the porch the whole time Dagan and Leah were here--collapsed next to the door in the awful heat and humidity, but she refused to come in. Safer out there, I suppose, with all the activity going on in here. Dagan snapped a picture of her--hehe! :) 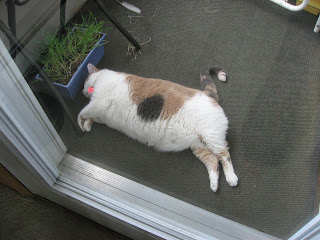 We tried this new indoor-outdoor antenna in various spots all over the apartment. I had lost wireless internet altogether on Saturday again, too? This antenna worked (as well as we have gotten an antenna to work) right in the livingroom up on the bookcase near the porch door. 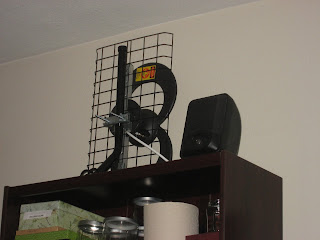 Dagan and Leah brought an old audio system of theirs and hooked up five speakers to bypass the TV speaker that has static. But couldn't get it to work. (FYI--Leah found online that the speaker static was a complaint people had about Samsung.) Gave up on that for the time being and left it as is to work on the antenna.
****
Frustrating! No matter what we did--could not eliminate the glitching. Despite the fact it would say that the reception was really good? Checked cables and wires and changed some of them. Decided that we need to troubleshoot some of the boxes next. Exhausted--they went home--just as the TV froze up--hehe! 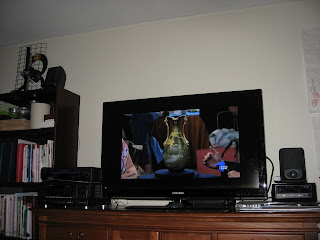 Turned out it lost wireless again. So--it might be their old router box for that issue--even tho it worked fine for them, of course. I don't have the best luck when it comes to electronics, as D&L will attest.
****
As soon as they left, Karma wanted in. She tip-toed about--checking out everything, of course. The table-top, folding writing desk got moved from where it was next to the art table at the end of the dresser--so Karma was fascinated with that and pawed it a while. I put it there to keep her from trying to get her pudgy self behind the dresser and getting trapped back there. Now we have a large speaker there instead. You can just see it to the right of the writing desk. Karma laid and pawed at that speaker for quite a while, too. Something new! ;) 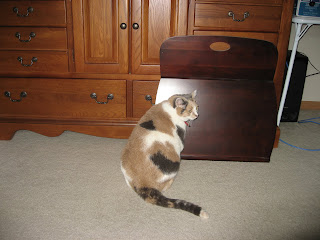 I called D&L after they got home about the wireless internet being out again. Leah told me to unplug the router, wait, plug it back in--and then it did work. So that really might be a big culprit in the TV system dilemma. We'll see if that can fix the glitching if we switch routers? (I am learning a little more all the time about how these things work because of my poor luck with electronics--hehe!)
****
Couldn't sleep. So I decided to really go to town playing with the new dies. The big Tim Holtz die gets full of paper specks and was so hard to clean off in-between. I came up with a solution to that problem! Used an extra brush top from a bath back scrubber! It works like a charm to brush off all the tiny pieces of paper each time so they don't jam up the blades--tada! 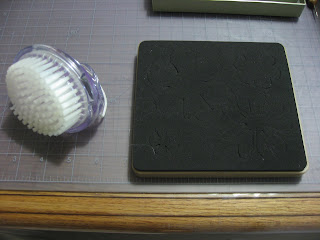 I cut mostly with that big Tim Holtz tattered flower die last night. Experimented cutting with cardstock, maps, painted wax paper, cloth, paper sacks, tissue paper, vellum, magazines...having a blast! (Thanks Sue in Alaska for some of those items--they'll make gorgeous flowers!!) But I quickly outgrew room in the box I had made up.
****
So I went looking for what I could use temporarily for the cut flowers...and found our stack of wooden boxes we bought on sale to decorate. 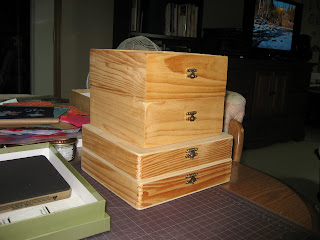 These will work fine for now and will hold a lot! 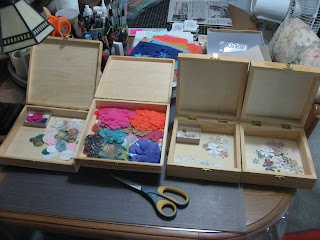 We had four of them--so I could use one for the daisy-like Cuttlebug flowers... 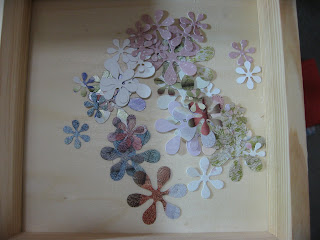 ...one for the sharper, rectangular petaled Cuttlebug flowers (the little box inside holds the odd parts: stems, centers, and leaves)... 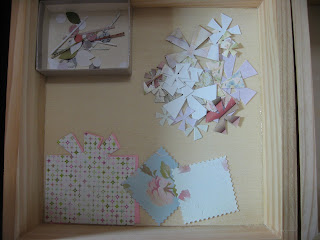 ...one for the bigger Tim Holtz tattered flowers... 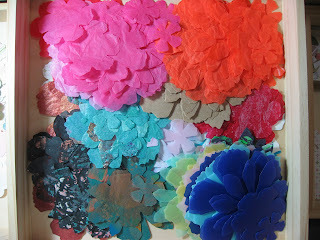 ...and one for the set of four sizes of fluffy, round Cuttlebug flowers (the small box holds the cloth and cloth-like paper ones). 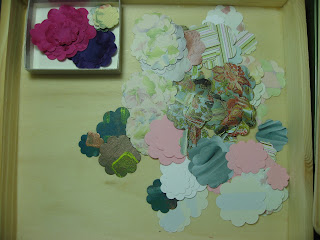 I will be able to cut a whole bunch of the three smaller types of flowers out of the leftovers from the larger tattered flower die. So that's next. :)
****
Meanwhile, I have lost wireless internet again, apparently (TV went to black). I have to go see if I can reboot the router so I can post this. Dagan and Leah will be back tomorrow--and the saga of the computerTVsystem continues--hehe! I have no doubts that we will eventually find the problem and it will work--because we have seen it can work really very well already--at times--ROFL! We'll fix it up. I know Dagan and Leah can figure it out. And I have, if nothing else, learned to be more patient than I ever thought possible these past few years--hehe! So--no problemo. I am not worried. I am not stressed about it at all. :):)
****
Of course, maybe that's because I do have cable TV still in the bedroom if I want to watch it or record. Good thing I didn't cancel that yet, I guess. And I am about a third of the way thru Pillars, now. Savoring it this time--ahhh! I am never without things to do. Never bored. I would miss TV if I didn't have it at all, I know, being a TV baby. But these days with Netflix and the Internet...you can find a lot of stuff from TV (past and present) in either place and pick & choose--ahh! TVbaby and movie-lover's heaven, eh?
****
Well, off I go to mess with the router. :):)
****
"There are two ways of spreading light: to be the candle or the mirror that reflects it."
Edith Wharton
Posted by Rita at 6:15 PM