Feeling better every day. Many thanks for all the comments and emails with well wishes. I am hoping to maybe start catching up online later today. :)
****
One of the storms that went thru was pelting rain into the porch, so I laid the metal TV tray down that stands over Karma's cat grass planter (her perch for watching the goings on in the parking lot--that she hasn't been using lately at all for some reason) so the planter could get some free watering...and, of course, to shake up Karma's world a little--hehe! 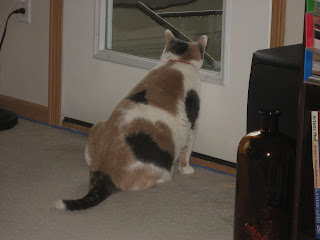 Since I have never laid the TV tray on its side, she was very nervous about peeking thru the door... 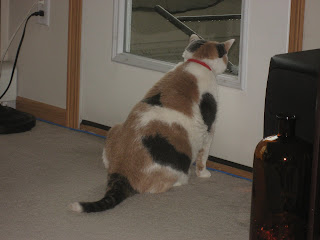 ...but easily sidetracked by droplets sliding down the glass--hehe! 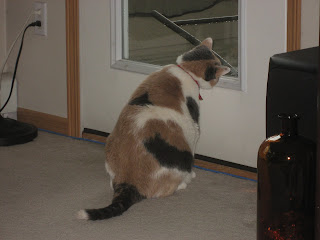 When I was sleeping so poorly--and up and down so often--once in the dead of night I came out to the living room to turn up the AC. Now, Karma doesn't think I saw her without my glasses on in the dark, but I did. She sat very still and silent--right on the corner of the art table--where she's not allowed. Of course, I already knew she goes up there when I'm sleeping because she drinks the water (so I always leave it clean and fresh) and she pulls all the brush handles together. I wondered why. Well, she sits on them, of course--duh! Now I know for sure--hehe! Don't tell her I saw her. Thinking positive, knowing I would be feeling better, and being without TV again (I'll explain)--I started on mass producing a set of birthday cards on Friday night. 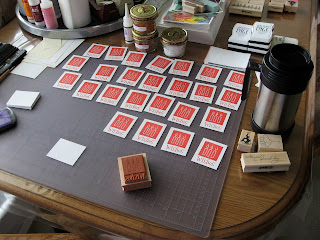 This candles and "wishes" stamp will go on the fronts. 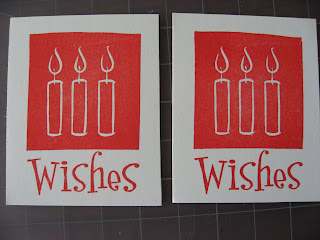 Oh--and, Iggy! Look who loves her pillow on her chair! :) 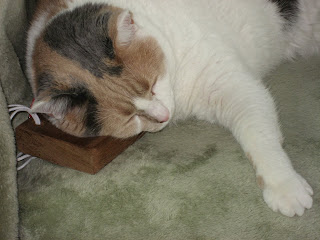 Okay--the TV. We've been having problems with the old keyboard all along and knew I'd need a new one. Been not working off and on. We've changed batteries, messed with it, and got it working again briefly several times. Well, several days ago it finally died. I could still run the TV with the mouse. Dagan and Leah planned on me coming over to their place this coming Tuesday to try out their fancy keyboard.
****
Friday--Dagan had his checkup down in Minneapolis (all went a-okay!) and I had the dentist. That evening the TV suddenly went blewy! Pixelating like crazy! I was in the kitchen and Karma was sleeping on the chair--no apparent reason, right? But--now--I know some new things to check and do.
****
So, I check the tuner and it had too many lights on again (I wasn't recording anything), so I unplugged it, waited, and plugged it back in. That gave me the "no signal" blue screen. My next step is to reboot the computer--shut it off and restart it. Which I did--without thinking--forgot--had no keyboard--hehe! Couldn't type in my password! So I couldn't get back into the computer at all.
****
So, I read Pillars and started the set of birthday cards--hehe!
****
Slept really well, BTW, that night and last night. Ahhh!
****
Leah stopped over briefly on Saturday with a new keyboard just like theirs. Came with it's own mouse! Has all these keys on top that you can use like a remote--to pause, play, FF, rewind, etc. Very nice!! 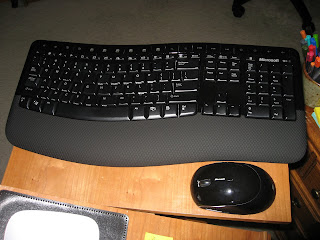 This is what my "reader's table" looks like these days. The new keyboard & mouse on the shelf and the McLap, magic mouse, and cord for the camera on the slanted side. Leah brought over this black sticky pad that I can set things on and they won't slide at all--it's awesome! That's what the magic mouse sits on. Actually, most of the time the black computer mouse for the TV is on the end table next to me or on the sticky pad with the magic mouse. 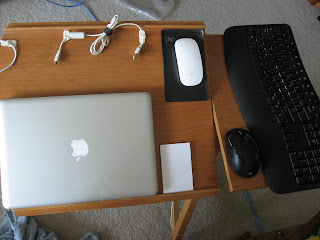 Anyways, no clue as to why the TV went blewy--but you know how computers act up every now and then and you have to shut them off and turn them on again to unscramble their brains? That's probably all I have to do--actually what I did. And it obviously worked, because it has been working perfectly ever since I could type in my password again. Hurray! :):)
****
Who would have ever thought, as a kid growing up in the 50s without air conditioning when computers were something that took up whole rooms and looked like they belonged in space ships, that I'd be watching TV thru a computer and be totally lost without my McLap!? Not that we didn't think life was changing at an accelerated pace and strange things could be in our futures--we did read 1984, after all--ROFL! But I think things have unfolded in a much better way than people ever imagined. :)
****
Yesterday--spent more friendly time with the ice pack, watched some old movies I had recorded onto the computer (tada!), and worked on the second half of the birthday card fronts. 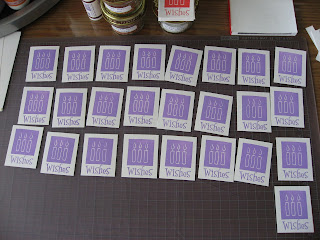 This half in heliotrope instead of scarlet. 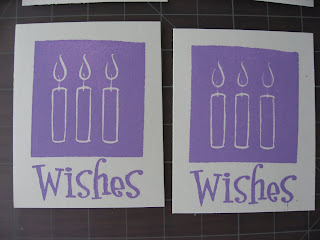 Oh--I don't think I told you--when the dentist got the tooth out he told me there's a small crack on the tooth next to it by the filling. Said that should be easily fixed by replacing the old filling. They were booked up for August, had a techie guy there updating the computer system, and told me to call back in a couple of weeks. Fine with me. I need a break from even thinking about teeth. ;) But that means I'll probably go back in September. And I still haven't had my teeth cleaned! I will be done with the dentist eventually--hehe!
****
Up under my cheekbone is still sore. Not sure if that will go away or is from something else. This dentist told me that you can have facial pain from clenching your teeth. ?? I do clench my teeth--always have--so maybe? Pain, I can understand--but you wouldn't think that would cause swelling? Time will tell, right?
****
Anyways, I want to have the stamping done and all the backs attached to the bookmarks before Tuesday so I can give them to Leah. I'll continue to work on the birthday cards. I know I'll feel so much better if I can get some more of the projects done on my list for 2010. I never get them all done, realize I think too big in January, and the list is more of a reference guide--but I really do try to get at least half of them done--hehe! ;)
****
Maybe now things can get more back to my normal? Knock on wood, eh?
****
Sunny morning. Supposed to be cooler (low 70s!), cloudy, and very windy today. Have a really great day!! :):)
****
This quote--*she chuckles*--well, it naturally follows that my current life is proof positive of my deeply sick mind!! ROFLMAO!!
****
"The mind has great influence over the body, and maladies often have their origin there."
Moliere
Posted by Rita at 5:33 AM

Karma was probably wondering "what happened to my cat grass?". She looked intent on knowing what was going on out there. That's nice how you make sure the water dish on your art table has clean water in it for her to drink during the night. I bet she thinks she put one over on you. LOL

Your birthday cards are looking nice so far. I've never heard of "heliotrope" before. Nice color tho.

I'm glad you figured out the TV and how to reset it. That new keyboard looks really hi-tech. Not sure I'd be able to use one like that. I'm so used to the older styles, and I still go that route when given a choice.

Woke up to light rain this morning and thunderstorms (some might be severe) predicted for this afternoon and tonight. Yesterday afternoon was beautiful, tho.

I hope things get back to "normal" for you soon.

That quote is true in a lot of cases. (not too sure about your "deeply sick" mind tho. LOL)

Loved the pics of Karma as always! So sorry about your facial pain, it sure is always something it seems thats for sure. Im glad you are sleeping better and that keyboard looks really nice :o)

AliceKay--Oh, yes--I'm sure Karma thinks she pulled one over on me in the dark that night--hehe! :)
I hope it is cooling off down your way, too. Sure been a stormy summer!

Lynn--Yes! Been so nice to sleep better and the keyboard is really nice--and "silent", too. Awesome. :)

Glad you figured out the TV system and got it working again. :)

I'm also glad you're making good progress with your craft projects. I'm a bit behind schedule on mine because I can't get to do stuff properly with everything everywhere like it is because of the work being done.

Tori--I know! Until they are done, you are stuck! Once they are finished and life gets back to normal, then you'll be able to do some catching up, too. There's no way I could get anything done, either, with the chaos of the plumbers and electricians and whoever else you have marching around your home! ;) Soon, I hope. I have to get over soon and check your blog!! :)

I love those pictures of Karma looking out the doorway... :)

So curious and so... engrossed?

I'm glad you are feeling so much better - your happiness is infectious!

Iggy--Yes, she was engrossed, to be sure. We seldom have the wind and rain coming that direction to where the rain hits the glass on the porch door and she'd never seen the table tipped over. You know how interested Karma is in her ever changing world--small tho it may seem--hehe!

I am sooo happy! Everything is life is relative, isn't it? Never take anything for granted. Things could always be worse, as my Swedish relatives would tell you--ROFL! :):)