Been away a while. My sister's birthday was on the 11th. Vicky did have undiagnosed diabetes--which, apparently, may not have anything to do with the cancer. That was stabilized, she came home from Mayo a couple days ago, and has started chemotherapy. Thanks for all the prayers and well wishes. :)
****
The roofers have been back a couple of times. Here today, as a matter of fact, till it started snowing harder again. Right now I don't hear them anymore. They still don't have all the siding back up on these roof chimneys and such. 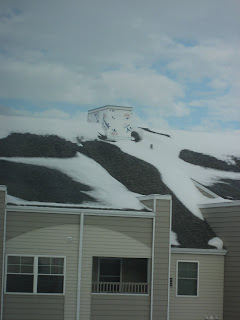 We've had a couple of days where the sun was out... 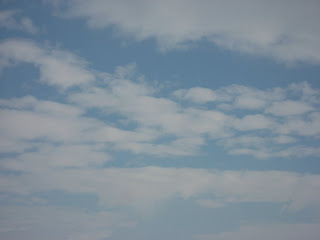 ...and the blue skies shone thru the white clouds--but we've had a lot of cloudy, gray days with light snow. Nothing like what hit down south of us!! Minneapolis--did you hear the Metrodome's roof collapsed under the weight of the snow? Over 17 inches, I guess. 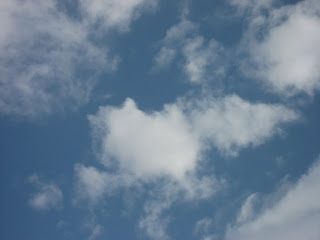 Love bunny tracks in the snow! 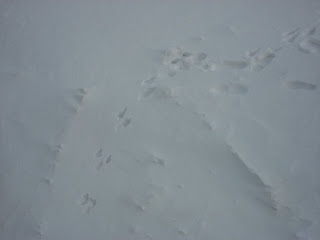 The big snowstorm missed us up here. Sounds like it was a doozy, tho!
****
I never really explained why I made myself up a weekly Mind-Body-Spirit checklist. It came to me that, since I have such a hard time with consistency (especially with all the health issues and sleeping round the clock and such), that if I made myself up a list of many things to choose from that I could maybe manage to check something off every day. This way I wouldn't feel as defeated, I guess. That I am not stagnant--even on bad days, you know? I can at least manage to listen to a beautiful tape and meditate, right? :)
****
So I made up a long list of things--from climbing the three flights of stairs to meditation to reading my spiritual/new age type books to journaling and even to giving myself a foot massage--ROFL! Having a whole bunch of choices each day has made it easier to check at least one thing off every day--usually more. Probably sounds silly, but it works for me. Helps make me feel like I am moving forward every day. Or should I say gives me the illusion--ROFL! Anyways--that's the story on the mind-body-soul list. :)
****
The round cat bed that Karma got from Sammy and Annie that she refused to have any part of and has been used as her "toy box"...well, for the heck of it I threw all her toys all over the living room floor (which Karma found unsettling and exciting) which left the round cat bed empty... 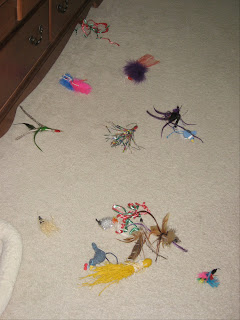 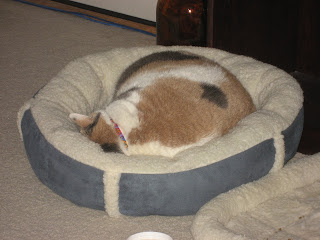 Karma has spent the past several days snoozing either in this round catbed or in her stroller. 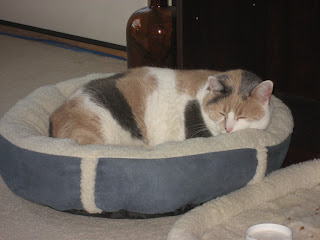 But---the stroller is back in the bedroom because--tada!--the cat box is now together... 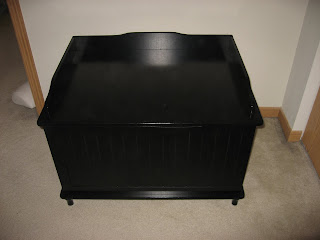 ...and in its proper place in the hallway. 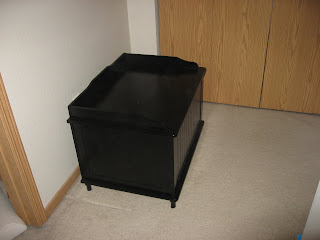 Dagan and Leah came over last night with the plastic tub to make the litter box out of. 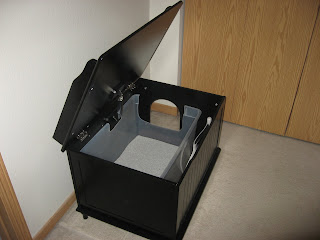 We wondered if the tub would be too long for her to manage to get in and out of both holes--that they'd be too close together for a cat Karma's size to manipulate? But doesn't it look nice? 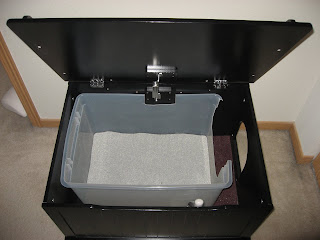 Leah cut down around the hinge and then made a nice big hole at the one end near the cat door. But we had to keep it high enough that Karma won't be kicking out the kitty litter, you know? So I wanted to try leaving it about 6 inches high or so by the hole in the tub.
****
Dagan hauled the old toybox cat box out to the dumpster on my little green cart. Adios! 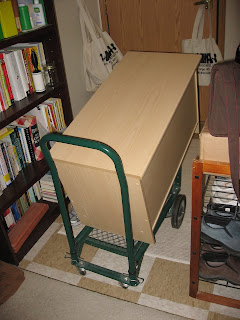 I forgot to even get a picture of Dagan before he left. Leah sealed all her Christmas cards with the glue gun style of sealing. I am going to do the rest of mine that way, too, I think, and not use the old flame and stick method.
****
I did remember to snap a picture of Leah later on while she was working on making tags for Christmas presents. 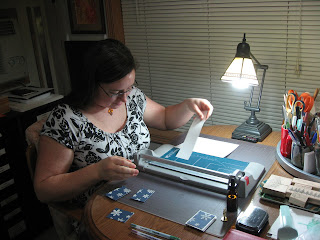 I was waiting--had the camera nearby--to try to catch Miss Karma the first time she checked out her new cat box, right? Of course, I knew that would be after Dagan and Leah left because Miss Wallflower was hiding under the bed until the coast was clear.
****
I hugged and said goodbye to Dagan. We talked at the door a couple minutes (have to try to squeeze in a Minnesota goodbye, of course) and off he went. Well, Miss Antisocial thought they had both left and came out from under the bed--immediately checking out the cat box, of course. I grabbed the camera and this is what happened...

So funny! It took a second for it to register that the voice from the living room wasn't the TV--it was Leah! ROFL! And that was the last I saw of her until Leah went home for the night--hehe!
****
She wouldn't go in the catbox--at all. So, just to make sure, I did as Leah suggested. I lifted her up and stuck her inside and closed the top--to see if she could get out. She could. And then I knew she knew there was a litter box in there.
****
You know how cats can be. They don't like anyone watching them. Even if Karma announces her departure from the box to me most of the time--she sneaks in. With a quick peek this morning, I was assured that she had managed to figure out how to get in and out of this one. ROFL!! All's well in Karmaville. :):)
****
Today I am washing clothes, going to get the last of my Christmas cards sealed, watch the last DVD of season two of In Treatment, and check something off my MBS list. ;)
****
"The foolish man seeks happiness in the distance; the wise grows it under his feet."
James Oppenheim
Posted by Rita at 12:29 PM