After the roofer was trapped and they did get the cage arm to carry him back down, they left the machine where it was. In the morning they plugged it into an outside car plug-in post (see the cord across the snow)... 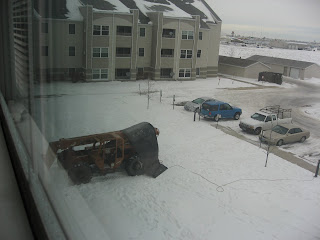 ...and then proceeded to futz with it for a couple of hours. Karma surprised me by attentively watching from her spy perch--hehe!
Once they got it going and sprayed all over the big arm (oil? de-icer?) then they were right on the roof pounding against that wall you see here. I kind of kept an eye that nothing fell off the shelves--hehe! I guess they were probably finally putting back the siding? 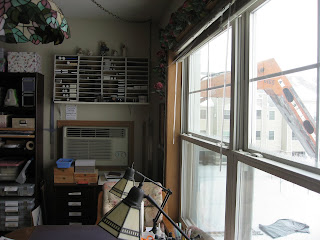 Karma actually sat on the floor near the craft table and kept vigil while they pounded. Don't know why she was so brave that day? Maybe she's gotten immune to the noise after all these many months? 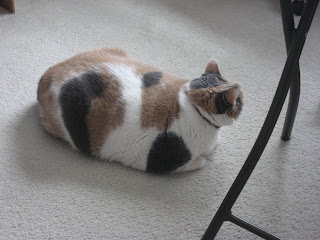 The oddest thing is they kept working after the snow started. It was coming down hard and they stayed up there. I was afraid somebody would slip off! Obviously going to be nice and dry under the siding, eh?
****
Anyways, they finally left. We had another good layer on the cars out there on Saturday when the sun came out. 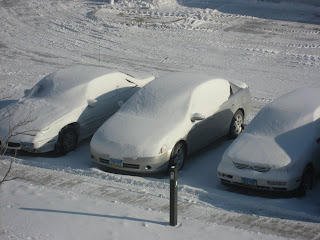 Amazed me that much snow was even on the cars with the wind we had. You can see the drifting on the garage roof. 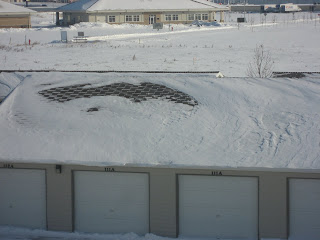 I actually love being able to see evidence of the wind on the snow. :)
****
It blew enough of the snow away that you can see where the sidewalk actually is below my window...and the footpath a few feet over that people have made because they haven't cleared the walk. 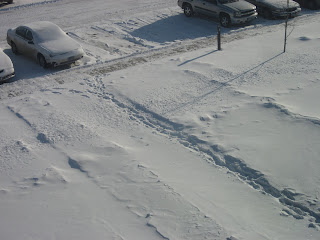 Oddly--they have been parking that big machine right by the office lately... 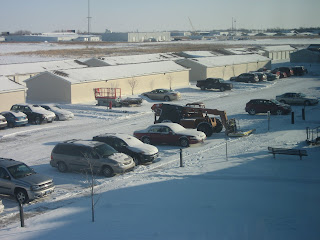 ...and not back by the garages? 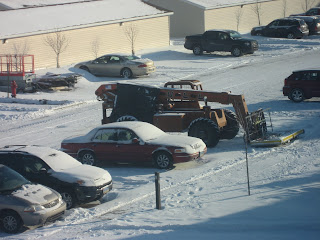 They must not be done if they didn't take away the machinery yet, you think?
****
It's snowing and windy again today. Warmer. 20 degrees. I'm washing clothes. Karma is sprawled out on the rug. (I turned the heat up or she'd be sitting up with her feet curled under her like the picture from Friday above--hehe!) Anyways, more probably tomorrow. :):)
****
"I see my path, but I don't know where it leads. Not knowing where I am going is what inspires me to travel it."
Rosalia de Castro
Posted by Rita at 11:13 AM