Since I have company coming soon, I will make this shorter today and just show you the burning bowl "ceremony".
First you kind of get quiet and think about the things you want to send off as wishes/requests/prayers to The Universe/God. You write them down on a piece of paper. 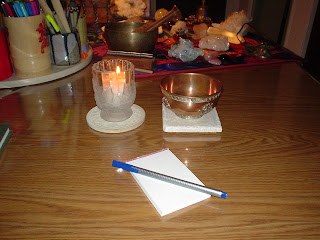 Then fold the papers up. You could have one or however many you want. When we do this is a group, you don't tell anybody what you have written down. I suppose you could. It's not a rule or anything. But it just seems such a private thing, you know? 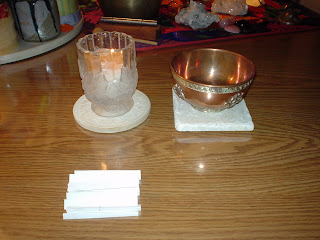 You pick up a piece of paper--read it--and think about it for a while.
Then you burn it --sending the words inside of the smoke off to the heavens.
When we are in a group, we usually take turns and go around the circle. 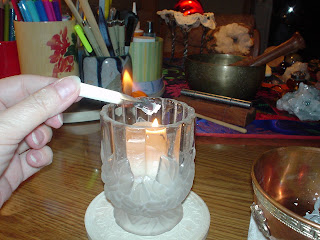 My burning bowl is copper. 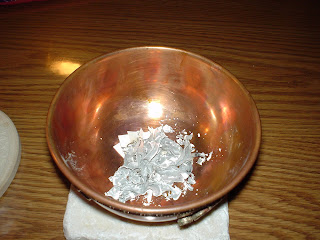 When we first started doing this--we used to make two separate piles. One for the things we wanted to be rid of or release or wanted taken away--and then one for what you wanted brought to you. I think that is kind of how I learned it? (Was in a Women's Spiritual Group in Minneapolis.) Might have been derived from American Indian practices?

We decided that was too negative. You can re-word things to have a positive spin--even when it is things you want taken away, you know? It is better to word it as what you want to have in your life--so you aren't even thinking or concentrating on the other, you know? Power of postive thinking and positive visualization!
I also just put down things I am grateful for. Like sending thank yous up to heaven. :)

It is a nice way to greet the year.

Dagan and Leah love the burning bowl and want to do it every time we get together for Sacred Circle. That's fine with me. :)

Well, I finished! Maria is coming over today. She was my Spanish teacher at Concordia College. We became friends and visit once in a while.