Last shots from the New year's Eve table!
I got the white heart-shaped plate with the raised angels and roses on from Denise. :)
I have always used it to hold smudge sticks.
Smudging is supposed to clear away negative energy. I may forget to use them most of the time, but every time I have moved in the past dozen years or so I have smudged the entire place before I moved in.
I didn't use them on New Year's Eve--just felt they had been ignored and brought them to the table. 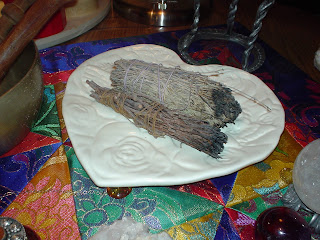 I have a huge crystal that was a kind of mysterious gift, as far as I'm concerned.
When I was living in a duplex in Rogers I came home from work one day and saw a big ugly rock sitting in the dirt--right in the corner where the driveway met the sidewalk. It was a dirt corner--where plants had once been long ago--and nothing was ever there before but a flat patch of dirt and the occasional forgotten toy. I noticed the rock as I walked past it--but got this sudden overwhelming feeling I was supposed to go back and pick it up. (I have learned to pay attention to those feelings.) 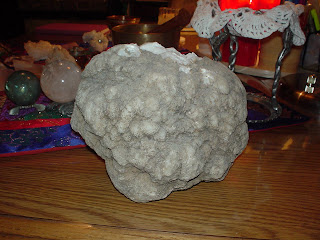 The rock was dirty inside and out, but I saw a few sparkles hidden beneath the black dirt.
Took it inside and washed it off with water and a toothbrush... 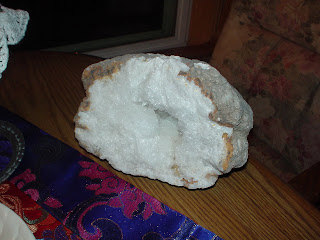 ...and was awed by this beautiful stone!!
I asked the kids who lived downstairs if they had brought a rock over by the driveway and sidewalk--nope.
I was like it was dropped from the heavens? Love it!!
The crystal in the front of the next picture is the biggest one I have ever purchased. I love it! Has so many pieces jutting this way and that. Has really good energy! 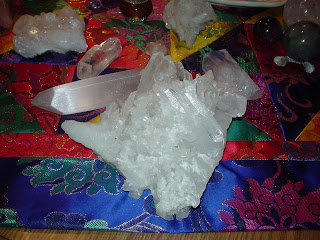 The long crystal wand behind it was a gift from Lynnette. I can't remember the name of that stone--started with an S.
The three spheres up in the corner (forgot to get a closeup of them) are different stones. The largest one is a regular crystal with what looks like a tiny red butterfly inside of it--made from natural flecks of some stone?
I saw this red crystal ball (below) at Rosedale in Minneapolis. Couldn't afford it, but I asked if I could pick it up and hold it in the store. It felt like it vibrated in my hands!!! (Still does!) I know it is a man-made crystal, but I really wished I could get it. I finally had the money and went back a month or two later. Figured if it was meant to be mine it would still be there. It was! And it was the same one that vibrated in my hands with the defect line (not too noticeable). The lady told me that they only ever had one large red ball. It has always felt special to me. 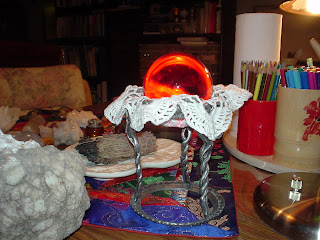 So--here's a shot of the crystals and stones--just a general overview of what was on the table.
I also love the one in the foreground--as it is blue and white.
The one in the middle is kind of pink and white.
And I have a few smaller crystals--and the hearts in the front. Can't tell I like stones, eh? I used to carry small stones that I had found here and there around in my pockets when I was a kid--and later as an adult, to be honest.
I have always been attracted to hematite. When I heard that it is a calming, grounding stone--I used to buy them up by the handful and give them away to people. Used to carry them in my uniforms and work clothes--at many, many jobs over the years. Also gave away the little pweter "angel in your pockets", too. Gave away quite a few of those at the two colleges I went to up here in Fargo/Moorhead.
So--there you have it! Yup--I'm still a Flower Child. :)
Now I'll have to catch you up with the daily stuff next time. Have a good one!
Posted by Rita at 3:02 PM