This is the side of the table where I gathered all my "stuff" for proper energizing--hehe! 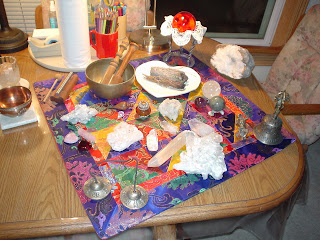 The first thing I did was pick up the singing bowl. The sound that came out of it was absolutely amazing! I have never heard it sing quite like that before! It rang and rang after I stopped--with a kind of pulsing bell-like sound. Since it sounded so wonderful (don't ask Karma for her opinion), I decided to play ALL my sound making "stuff". 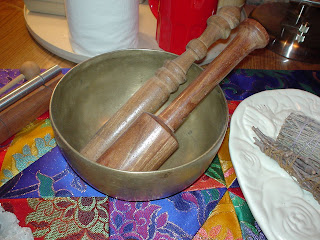 I can't exactly get a picture of me using the singing bowl. I hold it with my left hand on the bottom of the bowl and then use my right hand to run the stick around the outside of the bowl. This bowl may not be much to look at, but it has always had a great sound to it. I picked it for the sound tone and not for the appearance. Each bowl is hand made and so each bowl sounds different and has a different tone. Bought it in a Tibetan shop in Uptown in Minneapolis about 16 years ago. 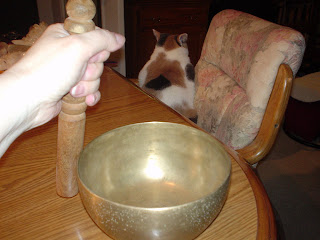 My chime is a very high, hurt-your-ears chime. Actually bought this one online. I like it but have to strike it gently. It is better to be able to hear these kind of items before you purchase them--obviously. 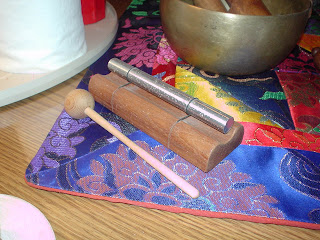 The Tibetan Ting Shaws I also picked for sound. Dagan bought them for me years ago in Minneapolis at a shop down by Lake Harriet. I have no idea what the symbols/characters mean on them. They had plain ones, ones with dragons on, and ones with symbols on. These just had the best sound--to my ear, anyways. 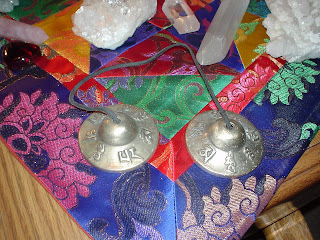 I can ring them holding them in one hand (as below) or holding them by the leather cord at the very base of the bell, hold them upsidedown, and them tap them together at the rim. I have seen them struck both ways. And a good Ting Shaw will vibrate for a long time after it is struck, even when you are holding by the cord at the base, I was told. Mine do--they're wonderful. 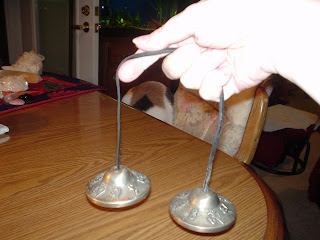 And finally I rang my Tibetan bell. (You can imagine Karma's annoyance--but she was too fascinated to leave her spot by the table--wanted to see what was going on, of course. But wouldn't turn around in the chair untl the noise was over and done with--hehe!)
I bought this at the same Tibetan shop in Uptown. I used to work at Uptown Pets as an assistant manager years ago on Lake and Hennipen and this shop was above the ground floor stores on Lake. You had to climb a long flight of narrow stairs to get up there. It always smelled of incense.
Incense! I forgot to light some incense--oh well. 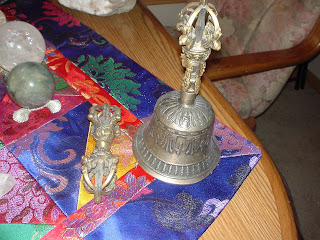 I picked the bell by sound, also. The tiny woman who worked there showed me how you could ring the bell with the clapper--but, if it was a good bell, you could use the same stick as I use for the singing bowl, hold the bell firmly upright, and run the stick around the outside of the bottom rim of the bell, and it would also sing. Mine does. I have a harder time doing that anymore since I have the bad left arm--can't grip. So, on New Year's Eve--just rang it...with the hand-tied clapper. 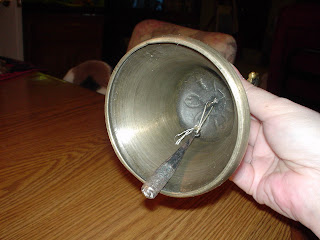 Okay! There! All the various sound making stuff.
There's something about the vibrations--you can feel them in your body. They feel like they physically lift my spirits up. Hard to describe. But I can see why they use them for religious ceremonies--just feel spiritual to me.
I remember listening to the Tibetan monks when they visited at Concordia College several years ago. They were all doing that chanting where they can do more than one note at the same time in the back of their throats. I have heard it on cassettes before--but there is no comparison to live! The vibrations that they create with their throats--well, it is kind of like the bells or the singing bowl--but moreso. I was up in the balcony and I could feel the vibration throughout my entire body! I felt lifted--lighter--peaceful....very hard to describe the experience.
Those men were the kindest, sweetest, gentlest, most loving human beings I have ever met. The monks exude this energy--a beautiful, loving energy--all the time. It was the most wonderful thing to see them laugh and smile.
And then watching the concentration and planning involved in constructing a sand mandala for three days--wow! And then they just destroyed it! To demonstrate how nothing material lasts in this life.
I stood in line to get some of the blessed mandala sand--and that was on my table, too, on New Year's Eve. Show you more tomorrow. :)
Posted by Rita at 10:28 AM