Sometimes Karma just has no sense of humor. 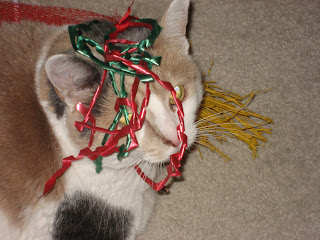 I guess maybe she has her own noodle days, too--hehe!
****
Dagan and Leah came over after work. We ate dinner and caught up, but instead of working on cards... 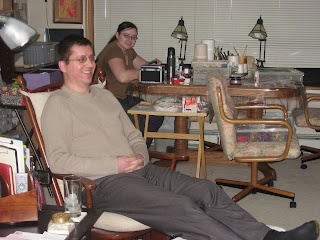 ...I had just gotten The Invention Of Lying from Netflix and we decided to watch the movie together. Took the night off and just hung out. Except that Leah brought back the box with her to store the dies for the Cuttlebug and hadn't rubbed off the sticky stuff yet... 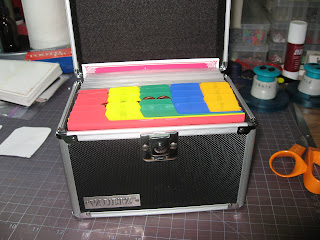 ...so she set up at the craft table and worked on that while we all watched the movie. 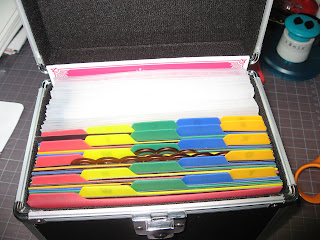 Looks a little packed in there, doesn't it? Might have to take out the embossing folders in the back there and store them somewhere else?
****
The movie was pretty cute. Had some funny bits that made you truly LOL. :)
****
In a world where no one fibs, fiction doesn't exist and people take each other at their literal word, unsuccessful screenwriter Mark (Ricky Gervais) gains fame and fortune -- and maybe the girl of his dreams (Jennifer Garner) -- by saying things that aren't true. Gervais co-writes and co-directs this original comedy that co-stars Rob Lowe. Look for cameos by Tina Fey,Jonah Hill, Louis C.K. and Philip Seymour Hoffman.
****
Great little unexpected cameos. Just a good silly movie. :)
****
By the time the movie was over Leah was done and it was going on 9pm, so they both decided to head for home.
****
And look what we found!! 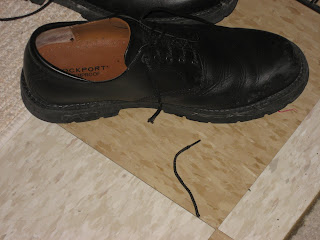 Miss Karma had made quick work of Dagan's shoelace!!
****
The last few months (since the Pavlov's bubble experiment) Karma hasn't spent the entire time in the bedroom anymore when they are visiting. She sits under the art table and hisses as they walk by--eventually goes and hides under the bed. But since there was almost a year of her consistently hiding under the bed the second she laid eyes on them--Dagan forgot about her string fetish--hehe! Forgot to put his shoes up on the shoe rack with the laces tucked inside. Any shoes with laces have to be kept up and out of sight. He said he won't forget again. ;)
****
The culprit was long gone and hiding under the bed.
****
And--hey! It was even Dagan and Leah's idea that I take a picture as evidence--hehe! So there you have it--evidence of Karma's destructive, sneaky, naughty side--ROFL!!
****
I slept during the night--tada! :) The Crop-A-Dile came yesterday and I missed it. The mailman called, but I just heard a bunch of people talking at once and then they hung up right after I said hello? I thought somebody had punched in the wrong apartment, you know? Come to find out they had tried to deliver from JoAnn's. I had a little notice in my mailbox. So I am heading over to the Post Office today. Have a package to mail, too. Two birds on my big trip--hehe!
****
I am also milling on a written question and answer interview for John Reid's newsletter (his poetry contest). Much less stressful than a radio interview--ROFL!!
****
Supposed to get up to 23 degrees today, so I won't freeze, either. Lucky break, eh? Anyways, have a great day today!! :):)
Posted by Rita at 6:33 AM

I could pick up another one of those little cases for all of the embossing folders, could get a different color to keep them apart if we want, or just label them... ;)

Also, I want to point out that Karma never chews my shoe laces, I have never put my shoes up, I always just leave them right there by the door on the rug, out in the open, and usually she rubs on them, never touched my laces... ;) She may hiss at me and jump out at me if I get too close, but she loves my shoes... LOL ;D

Hi Leah!
I was still chuckling at the sight of Dagan's shoelace last night. :) I think you have fatter regular laces, right? And they don't drape all over the floor, either. She likes to chew the ones that look more like strings--like Mr. Dagan's. But I never trust her with anything that reminds her of a string. You've been lucky. She likes sticking her face in your shoes and rubbing all over them--ha!

Another box in a different color is a great idea!! ;)

Thanks for the movie review.

You are so organized! Makes me look bad lol.

Yes my laces are thicker, and I leave them tied so there aren't long laces just laying on the floor like with Dagan's, mine are all tied up, but there are still the ends hanging off the sides, and she's never chewed them! :D

I like Jennifer Garner. I think she's a great actress.

A couple of my cats loved to play with or chew on shoelaces, but I've never actually seen one that was chewed in half. LOL

Hi Deanna!
My place feels anything but organized right now with all the supplies spread everywhere and trying to clean the carpeting...this place is small--so I need to be organized--hehe! Any clutter and you get to feeling hemmed in. ;)

Leah--I think if they were lying about on the floor Karma would chew yours, too. The way you keep them tied and off the floor they just aren't catching her eye. ;)

Hi AliceKay!
Karma loves those string-like shoe laces and can gnaw them in pieces in a flash. She will also chew apart thicker shoelaces but it takes her a little while longer. Any strings or anything that reminds her of string...*sigh*

23 and not that windy--was pretty darn decent yesterday--hehe! You'd really freeze up here in the Midwest!

Yes, I would! LOL