Karma misses me when I go away. Being gone two days in a row--she pushes herself against my leg and kind of lays on my foot while I am at the desk--and climbs up on my chest when I sit in my chair (and she weighs 20 lbs!)...uffda! (I don't know how to spell that and neither does spellcheck--but I sure know how to say it!) 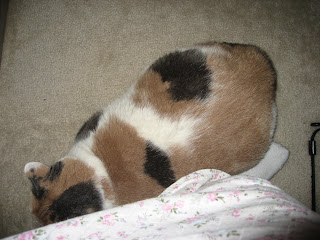 I have one small cavity that I will budget in and have filled in March. All went well--and I am sure glad I had my appointment yesterday. Look at what it looks like this morning! 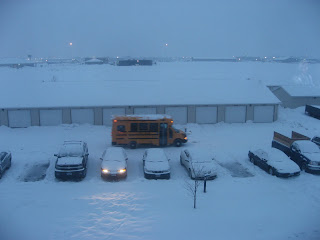 Been snowing during the night. I was in bed really early (9:30pm--told you being out exhausts me--ROFL!), but woke up at 12:30am and couldn't get back to sleep. So I got up and watched a couple of DVDs from Netflix during the night--both new releases. The first one was bad. OngBak2:The Beginning was nothing but kicking, slicing throats, twirling, hitting, leaping, killing, stabbing--and very, very, very little plot. Almost plot-less, shall we say.
****
Play Preview Tien (Tony Jaa), the son of Lord Sihadecho -- a tragically murdered nobleman -- goes under the wing of Chernang (Sorapong Chatree), a renowned warrior and leader of the Pha Beek Krut who teaches Tien a variety of deadly fighting styles. Now a master of weapons and combat, Tien seeks out those who slayed his family. Jaa also directs and Sarunyu Wongkrachang co-stars in this martial arts thriller set in 15th-century Thailand.
****
But the second one was really strange and intriguing--even if it didn't have a definitive ending. Cold Souls has a unique plot, to say the very least.
****
Paul Giamatti stars as himself, an actor in the throes of anxiety over an upcoming performance -- until he gives his soul to a mysterious company that promises to freeze and store it until he wants it again, along with his anxieties. But when his soul goes missing, Giamatti embarks on a journey to track it down. Along the way he learns a thing or two about engaging every human emotion, however difficult. Sophie Barthes directs.
****
There's a kind of dry humor embedded into this film that only being soul weary, then soulless, finding out your soul is as small as a chickpea, having your soul stolen by the Russian blackmarket, female Russian mules with implanted souls getting through airport security, soul extracting machines, and soul storage commericals & salesmen can truly bring. Actually gives a person something to ponder. What constitutes a soul? Would you want to trade souls?
****
I keep thinking about this movie and smiling. Paul Giamatti is absolutely perfect for this role. I can't believe it wasn't written for him. Maybe it was.
****
These pictures are for you, Iggy!! 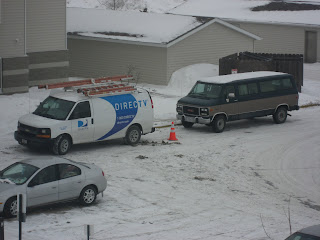 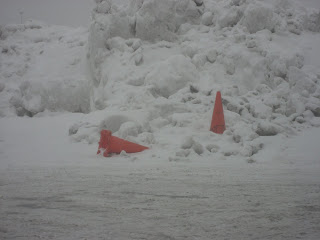 And I wanted to show you guys!!! Finally they got smart and removed the carpeting in the elevator! Notice they caulked around the edges. ?? 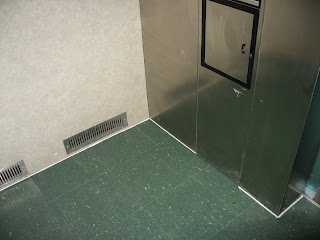 Do you think this might stop them? Maybe they won't want to risk splashing on themselves--ROFL! ;)
****
When I take sneaky pictures like this I find myself singing that commercial--"zoom! zoom! zoom!" 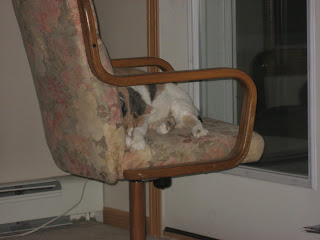 Karma looked soooo peaceful over there snoozing in the chair. Glad I learned how to use the zoom--hehe!
****
I did get the new lamps set up and they are marvelous... 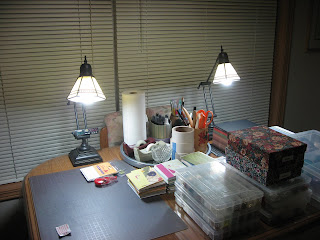 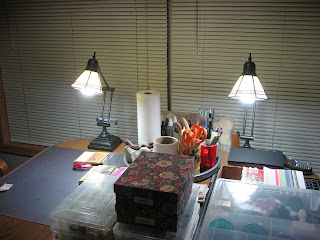 But--wrapped up in the cording--wound tightly around the cord, which was tied with one of those black plastic ties that had to be cut off with a scissors--so you couldn't possibly ever ever ever read this before purchasing--I found this strange warning label???!!! 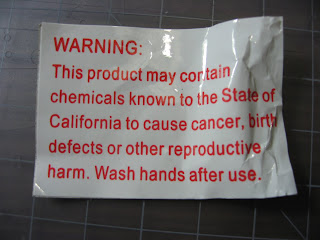 Wash your hands after using the lamp?! After what? Clicking the on and off switch on the cord? Touching the base? The shade? What kind of chemicals? How bizarre!!!
****
Well, I don't care. I love them! I washed my hands after I set them up, tho--hehe! And we will barely have to touch them now. My reproductive years are passed, I must say--but I still don't want to ingest chemicals thru my skin from touching my lamps. What next?
****
Well, it just keeps snowing. I have one more movie to watch--Up. Definitely an R&R day for me. Good day to go back down for a nap, I think. ;)
Posted by Rita at 7:45 AM

Hmm, perhaps your soul is kept in a conical shaped orange container? They do seem to like playing out in the snow. :)

Lots of meat and thoughts in this post! I hope your "new" elevator stays reasonable neat for a while.

p.s., the California thing is about the just the lamp cord.

"WARNING: Handling the power cord on this product will expose you to lead, a chemical known to the State of California to cause [cancer and...]" Only in the land of fruits and nuts...

We could wash the cord, just give it a wipe down with some Shaklee to help lessen the chemicals and such, could wipe down the whole lamp. :) I have seen that before though, on most if not all electronics.

Lead is used in PVC for several reasons. For wires and cords, lead makes the plastic more flexible and reduces the chance the cord will fray or break. If you are concerned about it - I think about the only way to avoid it is not handle the cords or perhaps wrap them with a light cotton cloth material.

PVC and Lead are health no-nos. PVC has been widely banned.

Those cones are having way too much fun!

Those lamps are pretty and put out a lot of light. I'm glad Iggy explained the warning.

Glad they got smart and removed the carpeting...

True, true, I completely missed the part of how awesome those lamps are going to be, they look like they are super bright! So happy to have bright cool, task lighting over there! :D:D:D

just be careful in the elevator, no carpeting makes for a slippery floor when your boots are wet.

Get some rest and you'll be ready to go again, I'm sure.

Iggy! Iggy! I think if anybody's soul would be stored in an orange cone...ROFL! Would be cold storage right now, tho, wouldn't it? hehe!

The elevator. I brought my movies down this morning and there was a big puddle on the floor. Dog? But I didn't have my camera. Not that you'd want to see that--ROFL!

I'm not worried about what little bit of lead or whatever I might touch on the cord--but if it is the cord, then why put the light switch on the cord and not up on the lamp--ROFL!

I tell you--I am really chuckling over here today. :):)

Leah--Yup! We could wipe down the cord, but I don't think it is that big of a deal. I think that tag was mostly for butt-covering, if you know what I mean. ;)

And--yes--they are bright! I wanted to take a picture at night so you could see! Awesome! :)

The lamps are like fancy Pixar lamps--chuckle! Leah brought up the Pixar lamps when she was taking pictures at Target for me to look at because they had some that really DID look like the Pixar lamp. :) These are going to work great!

Sue--As I mentioned to Iggy--there was a big puddle that looked like maybe a dog puddle this morning. They have wiped it up, but...gross! I thought the wet carpeting was bad enough. But this will be much easier for the poor cleaning girl to just wipe up with a mop--thank goodness!

I still haven't slept. Going to go lie down in a few minutes. Zzzzzz if I'm lucky. ;)

Your lamps are beautiful.

I hope you were able to catch some more zzzzzz's today.

"Up" is a great movie. My husband and I both loved it.

Hi AliceKay!
I just love the lamps! Thanks--I did get some pretty decent sleep. And I really liked "Up"--such a cute movie!! :):)