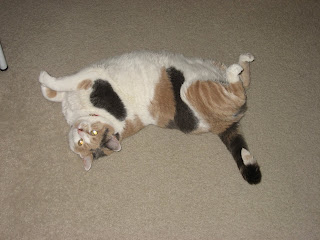 So nice to be back on days again. 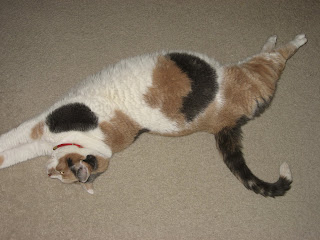 I did get the Crop-A-Dile Big Bite out of the packaging yesterday--a feat in itself--hehe! 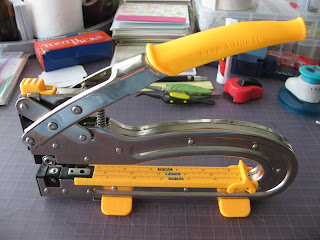 Just grabbed some of the packaging for experimenting. They immediately looked good from the top, I thought. 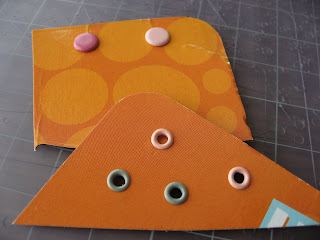 The backsides were all mangled--some more than usual. But I am not sure how to position the eyelet before you press down? I tried putting it up against the top part of the press and then balance it against the bottom part. There must be a trick to this? Oh--and I pounded lightly on the backside of the top button eyelets with my tiny hammer and then they looked flatter. 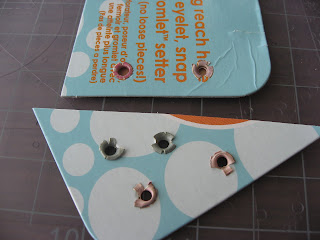 I decided I would look on youtube and see if I can find anything helpful as to how to position the eyelets in the contraption before I use up any more eyelets. I think that is the key.
****
Regardless--they look nice and round on the top--tada!! That is exactly what we wanted and why we bought it! Leah and I never let the backsides show, anyways. We always layer the paper so they don't show because they never look good on that split backside. At least not the way we do them or any I have seen. But if somebody actually wanted the backs to show and look nice, my first impression is that the Big Bite can't perform any miracles on the eyelet splitting unevenly problem. I had no such expectations--but did expect them to split more evenly? Basically wanted something that could attach the eyelets and leave them nice and round on the top because we tend to flatten them with the hammer method. It is so annoying to have one squished eyelet mar an otherwise lovely card, you know? Now I just need to figure out the best placement and dial positions to get them to end up the flattest on the back that I can manage and I will be very happy.
****
So--first impressions:
I can see why people complained that the instructions are limited and there's not enough information given. You don't know where to actually place the eyelet and paper--close to the top, the bottom, in between? There's no solid spot to put them, as far as I have found so far--a lot of looseness and wiggle room, shall we say. And which way to place the top and bottom dials is pretty hard for an old lady with bifocals to even read on the machine (small, black raised on black). They only provide some basic information--true. We already saw on youtube that people used different settings than they told you to use and it worked better?? I need to go back and watch again--look for videos. And keep experimenting with it, of course.
****
What do I think of it? Well, I am fairly confident that I can find the most efficient way to place/center the eyelets in the contraption to end up with the flattest backside. Getting the eyelets in the best position so that the backs split as evenly as possible will probably come with time and use--and I wish it was easier. Despite my fumbling around and not knowing what I was doing--the tops all turned out nice and round! So--I'm already happy enough that I bought it. I can only assume it will become easier as I use it. But--it is one of those items that only time will tell if I like it any better. My criteria will be if I consistently get nice round tops. I'll put up with a bit of annoyance for that end result--hehe! I'll let you know. ;)
****
I forgot to mention that a couple days ago I saw three police cars in the parking lot. Curious thing we don't see here. Later on that day they said on TV that a bloodied man was trying to get someone to let him in my building--pushing the various buttons--and someone called the police. But I never heard any follow-up information. Not sure if he was stabbed, shot, in an accident of some kind, or what? If anybody local heard--let me know, okay?
****
Overcast day--fog--16 degrees--hint of fine snow flakes. Could be the wind just shifting the snow off the roof. Feels like a good day. :):)
Posted by Rita at 9:03 AM

I am always impressed when witnessing someone learn a new skill. Kudos to you and the eyelet!

Hi Julie!
This contraption does take a little bit of skill--hehe! There are frequent attempts at learning new skills around here! :)

Oh my gosh! I saw that on the news too and it looked like your apartment buildings but I wasn't sure. I wonder what the deal was with that man?

Your new toy looks like it could be dangerously fun! I've never had luck with eyelets...they always get too smashed. I'm sure you'll figure it out! Way cool!

Have you seen these directions:
http://www.weronthenet.com/productsx/pdfs/cropadile2.pdf

and these people have 2 videos - maybe that's what you watched already:
http://www.youtube.com/watch?v=3CDznD4Jsj0

Hi Jennifer!
Yes--it was right here. They said the address on the news. Hummm...he must have lived or we would have heard about it--hehe!

Leah and I would regularly smash an eyelet here and there, too--that's why we wanted to try this. They have a hand held smaller version, too--but it only goes about an inch into the page. I'll just have to keep practicing to feel more comfortable with it. :)

Hi Sue,
Yes--I saw those HSN videos--and a ton more. The problem with the instructions--"Place eyelet, snap, or other embellishment in the hole in your project and then
line up the BASE of the tool in the hole of the snap or eyelet and compress the handle"--is the lining up part.

You can (1)try to balance the tube on the backside of the eyelet on a slippery little metal bump--with a piece of paper blocking your view entirely, of course. (2)try to hold the sometimes bendable piece of paper up against that top protruding prong and keep the eyelet hole inside the little prong as the square piece moves down. Or (3)try to hold the eyelet and paper in midair and center it or line them up as the pieces come together.

When I watched people do it on the videos it looked like most people were using method one. Kind of laying the paper and eyelet on the bump and using a "feel-ly" method to guess that the eyelet was centered on the metal bump (because you can't see it with the paper in the way and it's basically a balancing act until the prong part reaches it). But if you have the paper too far down on the eyelet--they tip. When they tip they seem to really split badly on the back...?? Such is my learning curve so far. :):)

I did find the video where the lady said to use a different setting than they recommended, so I'll try that. And I found reviews that said it worked better with their embellishments--that some brands tended to split very unevenly. That may be the case with mine. I know Leah and I had that trouble using certain eyelets with the hammer setting method, too. So, I'm going to try some different eyelets brands, too, that we have--just to see if some work better than others. :)

I'm sure the more you use it, the more you'll learn how to place the eyelets and such. Good luck!

That's pretty scary news. That kind of thing would worry me.

I wonder what happened to that man? Never heard. I hope he was okay? Made me wonder if somebody did something to him or it was an accident? And did he live here? Maybe it's the writer in me that always wonders about the whys and what happeneds--hehe!