I forgot to show you pictures of the cards Leah made... 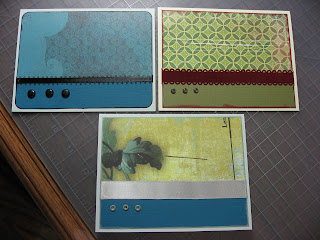 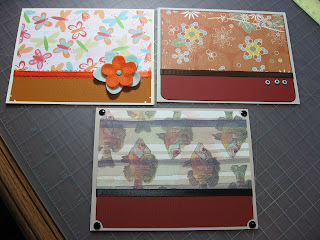 Also forgot to show you that despite Karma's head rubbing... 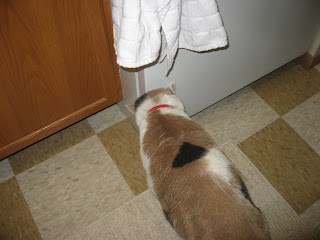 ...the frig is still clean after Caroline got done with it Tuesday. All her baby marks are gone now. ;) 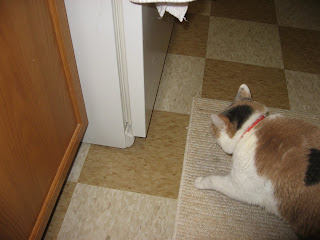 And here's the portable hard drive thingie, too. Cool! Small, isn't it? :) 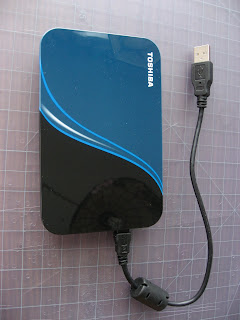 Oh--Leah and I ordered a Crop-A-Dile2 on Wednesday night, too--a contraption for setting eyelets. I'll show you when it arrives. We read a lot of reviews and they were completely mixed--pro and con. The ones who love it--love it. And the ones who don't--hate it (and many couldn't get it to work properly). We hope that we can figure out how to work it and take the side of the lovers. ;)
****
We've had trouble with the hammer method for some time. We tend to flatten the eyelets and have wanted to find a way to set them nicely. And with this Crop-A-Dile you can set eyelets in the middle of the night if you want to. Can't do that with the hammer method! I think we can figure it out and it will be awesome! Think positive, right? :)
****
Also--I forgot to tell you about a movie I watched that I just loved! The Burning Place is one of those movies where you have to pay close attention and have patience.
Charlize Theron plays a depressed, sex-obsessed restaurant manager in this moody, fragmented drama -- screenwriter Guillermo Arriaga's directorial debut -- that weaves together four seemingly unrelated stories separated by time and space. A New Mexico housewife (Kim Basinger) begins a torrid affair, two teens mourn the death of their parents, and a young girl tries to mend her life in a Mexican border town.
As a reader and a writer I love nothing more than a story with many layers that unfolds gradually to show you new complex aspects to several characters--the whys, you know? The movie jumps around in time and tells several stories simultaneously. You may see this initial side of someone and their situation--think you understand what is going on--but then revisit and revisit from different angles and moments in time. The acting was excellent and so subtle. The story pieces finally all fell into place. May not be everyone's cup of tea, but I really, really loved this movie!!
****
I also watched A Serious Man--heard about it on the Golden Globes.
Larry Gopnik (Golden Globe nominee Michael Stuhlbarg) has hit a "rough patch," according to a colleague, and it would seem so: people are dropping dead all around him, his wife (Sari Lennick) wants a "get" and his whining kids (Aaron Wolff and Jessica McManus) only add to the heavy load. Larry is just looking for some help. Can a few rabbis guide him to life's answers? Richard Kind co-stars in Joel Coen and Ethan Coen's 1960s-set, dark Jewish-culture send-up.
Was filmed in Minneapolis (my hometown!) and really looked very genuinely 1967 to me--who lived in the suburbs and graduated in 1968. This movie has a very dry, dark humor to it. You wonder what else could possibly happen to poor Larry. There is no happy ending, that's for sure. I am always curious as to what the Coen brothers will come up with next. They aren't afraid to take chances. Was pretty good.
****
So--now I think you are caught up--hehe! :) And I'll be heading for bed pretty soon--about the time the sun is climbing up past the horizon. As long as I sleep pretty well, I don't care when I manage to do it--ahhhh! :):)
****
Have a great Friday!!
Posted by Rita at 4:28 AM

How long will it take Karma to "re-mark" HER fridge? Shall we have a pool?

I'd probably enjoy a movie with Charlize Theron in it.

...and its always a bit of a rush to see a movie with places you recognize in it.

I hope your sleep comes back around to the "bright side" soon. :)

Hi Iggy!
Leah doesn't care for the wild printed paper so she went thru and picked out some of the more subdued papers--hehe! We both prefer pretty simple styles, actually. By the time we get done with this huge batch of scrapcards we'll probably be sick of working with the same split paper style, I suppose. For a while, anyways--hehe! We can always put them aside and switch to something else if we ARE getting bored. Remember--we don't want to do anything if it isn't fun and happy to do. ;)

Ha! A pool! I would guess a month or two before I could see the dark neck smudge again--hehe! But I gave Caroline permission to clean there now--ha! And I am not a betting woman.

Well--you would see ALL of Charlize Theron in this movie. Full frontal and a side view, if I recall. (You can't forget the full frontal in the window!) And there's a full back shot of Kim Basinger--unless it was a body double? Bet that peeked your interest--ROFL!

I loved the card with the butterflies and dragonflies all over it.

I hope the Crop-A-Dile2 works perfectly for you. Always good when things work the way they're supposed to.

I hope you were able to get some sleep.

Time for me to call it a night and head to bed. I get up at 6:30 mornings to begin my day. Until next time...take care.

Hi AliceKay!
Thanks! That one has a felt flower on it. We are having so much fun. :)

I slept all day! Working my way around the clock pretty quickly and sleeping pretty darn well--so I can't complain. ;)

I'll show pictures of the Crop-A-Dile 2 Big Bite when it arrives. Kind of does look a bit like a croc's jaw, I suppose. Silly! We hope that between the two of us we can figure it out--hehe! Sleep well. :)