Good Monday to you! 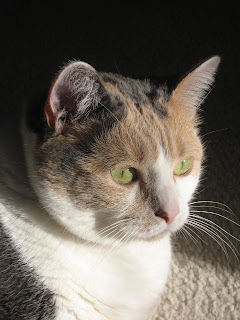 Quit smoking this day in 1989. I just realized I never did remember to tell you that story last year. Not today, either. But I wrote myself a note this time. ;)
****
Today I am asking for prayers for Leah's mother, Vicki. She just found out last week that she has cancer. They gave her 3-8 months to live--about 3 months if she did nothing and about 8 if she starts aggressive chemo. Vicki recently remarried and is a newlywed. She has a lot to live for.
****
I'm an optimist--by choice. I believe in the power of prayer and faith and positive energy. I've seen and heard of too many miracles not to believe that anything is possible. So, if you have a moment--send a prayer this way for Vicki. Prayers know exactly where to go. :)
****
When Dagan was an infant and they told me he didn't have long to live...well, then I wanted him to live the best life possible for as long as he was here. The world is such a fascinating place. Living is a joyous mystery. We had days filled with laughter, lessons, and love. But I didn't raise him as if he was on some kind of vacation from his life's purpose, you know? Was more concerned with the kind of person he was while he was here. How long he was here was up to God and was, frankly, none of my business. How he lived his life while his soul was under my care as his mother--that was mine.
****
And there were miracles.
Prayers and the unexplained.
Lots of laughter! :)
****
I have heard of people who were given dire prognoses who lived for many years. Sometimes people seem to be taken earlier than we'd ever expect. Often they are gone in a moment without warning. One thing about cancer is that it gives you time. Time to sort out your life and spend time with loved ones and examine your life's path, you know? Time. And time is a precious gift.
****
Doctors are not gods. They can guesstimate odds, but they haven't had some privileged peek at God's timetable. And we are all on borrowed time, after all. So we should make the most of it, right? Each day. :)
****
I've been blessed with lessons when I was young that taught me how life can change in a moment. Near death experiences, rape, miscarriage, violence, told my baby was dying...
So I don't live in la-la land with my head in the clouds. It's not denial. It's experience. It's hope. It's loving life and people and goodness and the power of positives.
****
It's not how long you live, but how well you live.
****
So I am praying that Vicki has lots of time and lives well. :):)
****
"Don't be concerned about being disloyal to your pain by being joyous."
Pir Vilayat Inayat Khan
Posted by Rita at 11:04 AM

My most powerful thoughts and prayers are with Vicki -

I fervently hope she is one of the few that hears the words, "total and complete remission."

I moreover hope she doesn't suffer and that she and Leah can share and enjoy whatever time remains.

I will keep Vicki in my prayers and hope for a miracle. I believe in miracles. There's a lot of testament out there that proves they exist. We never know what life will bring us, and we should always hope for the best, but sometimes that's more difficult than others.

However long she has left, I hope she has had a happy life, and that the rest of it is happy. My thoughts are with her!

Thank you everyone for the well wishes and prayers. I am positive as well, and hope for the best.

Distressing news about Leahs Mom.. perhaps someone will come up with something. Is she going to Roger Maris Cancer Center? I have heard some really good things about them. Prayers..the ultimate healer:)

At this time she is indeed going to the Roger Maris Cancer Center. Thanks again.

My prayers are with Vicki. Prayers, a positive attitude, a will to live and great Dr's can work wonders.

I have added (((Vicki))) to my prayer list and wish her much support, love and strength from family and friends to see this thing through. A positive mind-set and lots of laughter can go a long way too.

Thanks everybody so much!!! You guys are such a blessing! Each and every prayer and good thought is greatly appreciated. :):)