This is the wooden angel that watches over the craft area. :) Got her as a gift from my pen-pal friend Sue in Indiana. 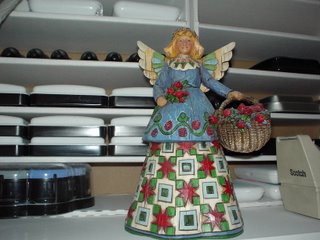 I mentioned the new bookcases. This is the bookcase in the hallway that holds mostly beading supplies. 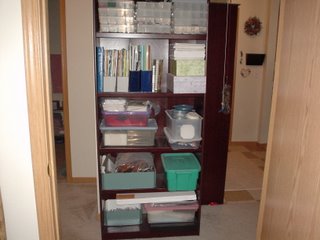 And this is an identical bookcase in the entryway that took the place of the short one (I sent over to Dagan and Leah). It holds cookbooks and craft stuff. 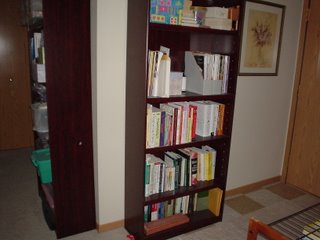 And I forgot to put up a picture of the wonderful new humidifier! No white powder!!! :):) 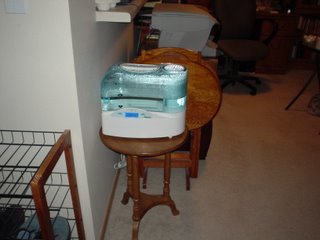 I decided that I'd post what I am working on with the birthday cards. What the heck! 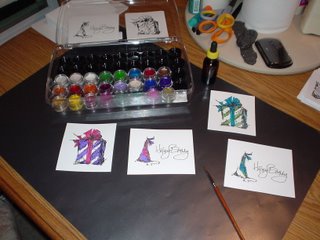 And I had somebody ask about the Kombucha Mushroom Tea. I have two baby mushrooms in the back of the frig (in hibernation-hehe!), but I quit making the tea because it kept giving me more problems with diarrhea--and I sure don't need more troubles with that! hehe! If I get straightened out in that department with the Shaklee--I might try it later on.

I watched The Illusionist last night. It was pretty good. But I have to admit that I had it pretty much figured out from the get-go--so there was no suspense for me--but it was done well.

Set in early 1900s Vienna, Neil Burger's romantic thriller centers on illusionist extraordinaire Eisenheim (Edward Norton), who falls for an aristocrat (Jessica Biel) well above his social standing. When she becomes engaged to Crown Prince Leopold (Rufus Sewell), the master magician employs his powers to win her love. His daring scheme creates tumult within the monarchy and ignites the suspicion of Chief Inspector Uhl (Paul Giamatti).

I am just washing clothes tonight and working on cards a little and watching TV and Six Feet Under. Glad to be indoors and warm as it is below zero. Finally more normal temperatures for January, I guess. :)