My trip to federal housing Monday. Here's the bus stop on the corner in front of our building. My three year old bus schedule was no longer accurate, so I missed the bus going that direction (towards West Acres Mall). I had to walk down to infront of the white building you can see right behind the bus pole to the left there. Ice on all the sidewalks. As far south as I am in Fargo, the bus I catch goes just on a little route from West Acres Mall (the big mall in town) and swings down around and over to K-Mart--and then back again--once an hour till the last bus at 6pm. 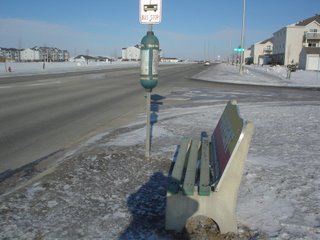 My bus--the 25--is a smaller little bus. The driver had on the public radio station and I had calming classical music for the start and end of my excursion today. I either got my finger or part of my kleenex in the shot. Sniffles--exacerbated by standing and walking in the cold wind for 20 minutes, of course. 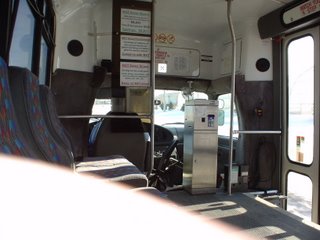 Then I transferred to one of the larger buses at K-Mart. Our number 25 driver was so sweet. He let us sit in the bus and wait where it was warm until the number 14 arrived to take us to the GTC (like the city bus depot)--where I transferred to the number 11 that goes up Broadway in Fargo. 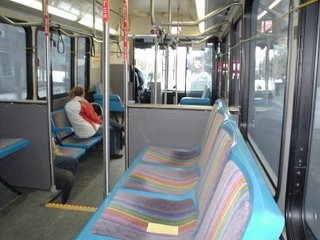 I made it there with time to spare, as I had planned. But, to my chagrin, I discovered that Babb's Coffee Shop isn't there anymore! It could have been gone up to a year or so for all I know. I remember hearing about the city of Fargo upping taxes or something and that Babbs and some other places of business might have to close or move. I did notice several boarded up store fronts. I asked a young couple walking by with a red cheeked toddler if they knew where Babb's was--they had never heard of it. They went into a pawn shop--that I didn't remember being there--and I wandered down another block and spotted an Atomic Coffee across the street!!

When I lived in Moorhead the original Atomic Coffee was a block and a half down the street from me. It was like a center for creativity to me. That is where I went to a lot of public "readings" for college and listened to little 2-3 piece bands or single singers. Lots of the students and professors kind of hung out there. You always saw people in deep conversations, hunched over laptops, reading, writing...

Then the City of Moorhead basically tore down a couple of blocks because of their renovation projects. (Does look nice from what I have seen of it--would like to walk it next summer.) Atomic moved across the street to a much smaller location that didn't quite have the total atmosphere--even with the addition of a couple of stuffed chairs. No room for a small band--just not the same. They opened a second Atomic Coffee in south Moorhead--same type of thing there. It's a little larger, but has a strange layout where it would be difficult to host readings or music there, too. They still have the best coffee and hot chocolate in town, as far as I'm concerned. And they still encourage people to settle in--have board games and newspapers lying around--and Internet access.

I had totally forgotten that I heard they'd opened a third Atomic on Broadway!! It used to be such a treat for me to walk down and buy a cafe mocha and sit and write a letter or read a book at the original Atomic. The other two didn't feel the same at all to me--not that they aren't just fine--but this! This is the place!! Like coming home, but better! The layout is better and the place is larger! They do have some stuffed chairs up by the window--and there is obviously room enough in this one to have readings and music. I forgot to ask. The bus doesn't go at night, anyways. But, I will be back there! Worth taking three buses to get there!

I went to my meeting with Linda at Federal Housing. She was actually smiling and looked good! She had some kind of procedure done on her back about a week ago and it took the main pain away for her. I was so happy for her! She is all crookedly hunched over and such a nice woman, despite her constant pain. I am amazed she is still working--but she insists she cannot afford to quit. ?? Well, she looked the best I've ever seen her. :) And I think I looked the best she's ever seen me, too! hehe!

By the time I was finished with the appointment with Linda I had missed the bus. So, to keep warm, I decided to start walking to the GTC. I managed to walk all the way on mostly icy sidewalks before the buses got there. Picked up a new bus schedule. Caught the bus to K-Mart, since it was the next one to arrive.

I didn't realize that I'd have a half an hour wait for the transfer at K-Mart going the opposite direction. Next time I'll take a bus to West Acres and go home that way. They have a large heated room to wait in over there! chuckle!

I really didn't want to go into K-Mart, but it was colder than I thought it would be outside because of the wind, of course, so I wandered in that direction. Then I spotted a store in the little strip mall adjacent to K-Mart. Scrapnook!!! In I went! But with only a few dollars to my name--and not being a scrapbooker (and this store has much less that could be adapted for card making--very specific to the 12 X 12 scrapbooking stuff--and very tiny aisles--jam packed, I tell you!)--I was done in ten minutes. Made a very small purchase. 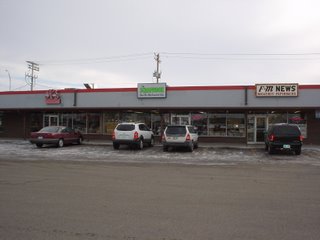 Back to the bus shelter to wait another 20 minutes in the cold. The shelter happened to be facing so that the wind came right inside. Metal benches--can only sit for a little while at a time when it is cold--chuckle! I am out of practice! I rode the buses all the time when I was in college for five years up here. I was adapted--acclimated! Not any more--LOLOL!!! 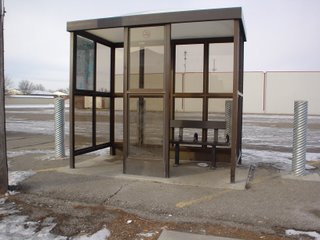 Headed for home with the public radio driver--and a chatty older gentleman who talked about french horns and a composer friend of his who played in Johnny Carson's band. Very pleasant trip in general today!

I told you how stark it is around where I live now in South Fargo. This is facing my building from the bus stop. See how icy the sidewalks are!? 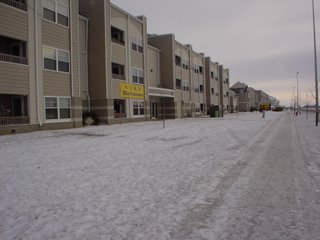 This is the front of our building. Nobody uses this entrance much. All the parking is in the back. But I really wish they'd clear off ALL the sidewalks. They don't clear off the sidewalk that runs in front of the buildings? Neither do the other apartment complexes along our side of the road? Maybe the City is supposed to get those? No idea? But nobody does much with them. 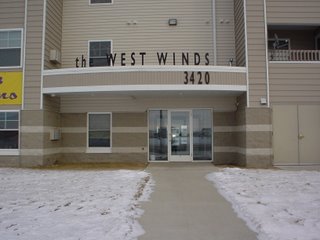 I walked thru the building to the right and over to the office. Warmer than walking outside--and less slippery! hehe! I had papers to sign there, too--and I wanted to get it over with. I was very sore and knew once I got home I was going to be out of commission for a day or two. I got my yearly stuff all signed over there, too.

This is a shot from me leaving the office building. Our building is on the edge of the picture on the right side. They've been building homes across the way. Maybe this spring I will have to just wander over there and walk the basically naked blocks (baby trees). All pretty stark outside around here. 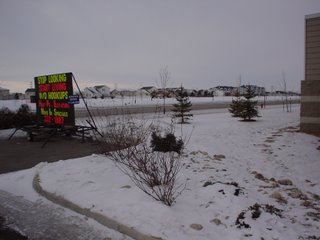 I had left my apartment at 11:45am and arrived home at 4pm. Now--do you feel like you went with me? hehe!

I was too sore to blog or answer emails. Dagan stopped by after work to pick up the movies and a couple packages that had been delivered here. He was going to help me search the garage for the rabbit ears and some other stuff--and I had the Christmas stuff on my little green cart ready to go back out to the garage, too--but I was too exhausted and hobbling.

I have another Netflix movie supposed to come for them today--the newest Superman movie. So, he might be stopping by tonight again. Caroline comes to clean at 1:30pm. Maria might be stopping by at 7pm. And here I am--awake in the middle of the night. I had gone to bed at 10:30pm and woke up about 3am and couldn't get back to sleep. (Leg & feet pains from walking. No big deal--just uncomfortable enough I couldn't fall asleep again.)