Started out as a usual calm day yesterday. Miss Karma was watching the rabbits in the field and the people in the parking lot. 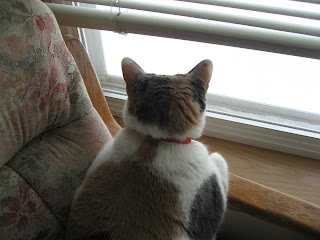 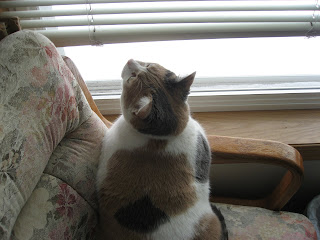 I finished the "framed" cards over the course of the day--tada! I can't thank you enough for this paper, Ann! :) 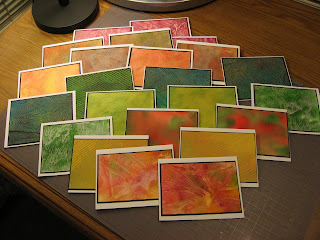 I had set this big empty plastic bin in the hallway when I was moving things around--because it is the perfect size to use up the the hall closet. Karma had been pawing at it all day off and on--trying to get it open.
Last night, as I was sitting at the computer here, I could hear this muffled cat whining. I hadn't seen Karma for a while--thought she had crawled under the covers of my bed for a nap. I called to her, as I usually do--what's the matter, Karma? Then she got a little louder, but still sounded like she was under the blanket or something. She usually comes waltzing in the room here to exclaim her excitement or disgust about something or another (she tells me everything, of course)--but she didn't show up?
I got up and look what I found in the hallway!! 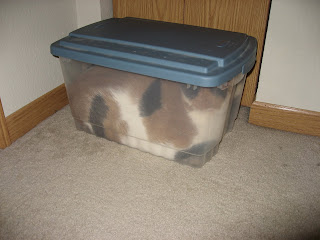 How in the world did she manage to open the plastic bin, get inside, and shut the cover on herself!!?? I raced for the camera and took a quick picture. (Hey! She was whining, so she was breathing, okay--hehe!)
She bolted out of there--rather warm and almost sweaty. She must have been too embarrassed to call out to me for a while, eh? 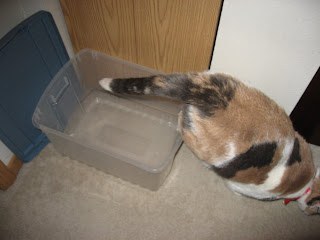 My reverse Houdini spent a good half an hour cleaning up her ruffled fur--and then she slept on her chair for hours and hours. She was obviously drained from the experience. ROFL!! Karma was lucky I am almost always home so that I was here to save her from herself!! When they say curiosity killed the cat.....
Posted by Rita at 1:05 PM