My experiment of not trimming the cat grass--well, it is still slowly dying, but it has lasted a lot longer than when I trimmed it. Looks like a small haystack, doesn't it? Karma is still chewing on it. 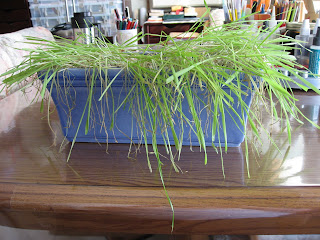 Hasn't been warm enough to melt much of the snow on the porch. Karma begs to go out--but she stands on that patch of carpet the door swings on. She cries when I try to close the screen door--doesn't want to step on the snow to get around the door--have to nudge her with my foot--hehe! But as soon as she has made it around the screen door and is on the green carpeting she is happily eating snow--for a few minutes. Been too cold to be out more than a couple of minutes lately. Then she cries when I open the door to let her in because she has to step on the snow to get back inside. But she's cold then and moves quite quickly past her dilemma--hehe! If I had ever picked her up and moved her either way so she didn't have to step on the snow--I'd be stuck doing that all winter--actually, for the rest of her life--hehe! 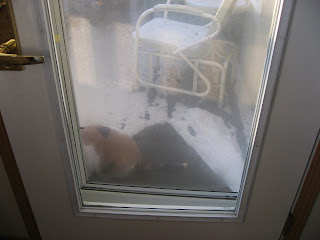 Had a couple people ask me what The Tudors was:

This superb and visually lush Showtime series provides a look at the world of the Tudors in the days when King Henry VIII (Jonathan Rhys-Meyers) was a handsome, charming, athletic 25-year-old. Inheriting absolute power at a young age, the king indulges his voracious taste for ladies-in-waiting, hangs out with his entourage of young nobles and makes momentous political decisions. The stellar cast includes Jeremy Northam and Sam Neill.

That was the summary for season one. Here's the summary for season two:
Hollywood icon Peter O'Toole joins the cast for a second season of the hit Showtime series. After King Henry VIII (Jonathan Rhys Meyers) secretly has his marriage to Katherine (Maria Doyle Kennedy) declared invalid and weds Anne Boleyn (Natalie Dormer), Pope Paul III (O'Toole) moves to excommunicate the king. Meanwhile, some of Henry's old friends and allies fall out of favor. The critically acclaimed drama co-stars Jeremy Northam.


Excellent show! The costumes, sets, and locations are a feast for the eyes! The political maneuvering and consequences are entertaining and complex--doesn't matter a whit that you know the eventual outcomes. The acting has been superb across the board! Showtime has really been stepping up and changing its old image. (I am a complete Dexter fan, too!)

OH, poor Karma....how she hates that snow well, apart from eating it, that is. lol

Karma should be really happy--we are supposed to get up to 30 degrees this weekend and some of the snow will melt on the porch for her--hehe! What a big baby she is! :)