A thank you card from Ann! So delicate! I love the color you used and how you touched around the torn edges of the paper with the green, too. This is just beautiful, Ann!! 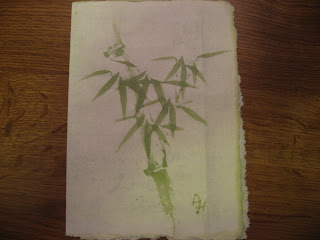 Inside is XieXie, Nin--she said it is a thank you, thank you as to a friend or family. 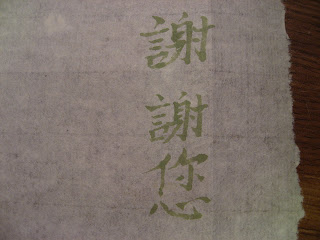 Thank you, Ann! You were more than generous! :):) I'm so glad your friend liked her journal!

I forgot I had this in my camera from the 40 below wind chill day. We had a few vehicles that wouldn't start and needed to be jumped or plugged in--but this one.... 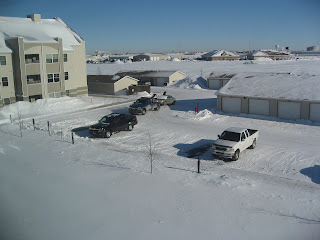 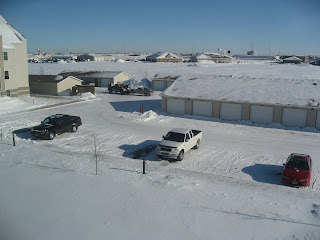 I think I forgot to report on Leah's car, too. The jumping it with the cigarette lighters didn't work. So they pushed it into the garage and used a space heater to warm up the garage. It started up after it had warmed up. Just plain had frozen to death--poor thing! Maybe this person's car just froze to death, too?
All I really got done yesterday on the reorganizing was to made an initial attempt to find spots for the satchels we had labeled and ready to go. Can't really make any final decisions until they are all filled and labeled--but at least I removed one pile from the floor--hehe! And then I started another one there on the floor in front of my rubber stamp cabinet that is a "waiting for labels" pile. :) 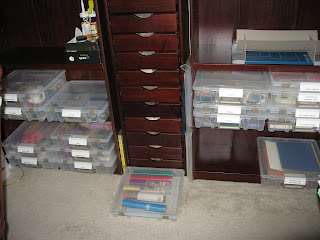 I watched this movie that was so funny (to me, anyways)--called Ghost Town.
British funnyman Ricky Gervais ("The Office," "Extras") stars in his first feature film lead as Bertram Pincus, a hapless gent who's pronounced dead, only to be brought back to life with an unexpected gift: a newfound ability to see ghosts. When Bertram crosses paths with the recently departed Frank Herlihy (Greg Kinnear), he gets pulled into Frank's desperate bid to break up his widowed wife's (Téa Leoni) pending marriage to another man.
Just cracked me up! I loved it! Ricky Gervais is this dentist who really hates people in general and then ends up being followed about by ghosts who are just dead people he can't stand either. Was really cute! I saw it a couple of days ago and it is one of those movies that when I think about it later it still makes me chuckle!
Have a great weekend! We were supposed to hit 30 degrees, but now I see it is expected to be more like 20. Well, I'll take 20 degrees! Feels comparatively warm and Karma has been out twice already! :)
Posted by Rita at 11:03 AM

The guy was such a curmudgeon and detested people--and when these ghosts could follow him anywhere....I still think about a few scenes and it makes me chuckle. And I like when people change for the better in a movie or book. :)