Fair Warning:
You know I don't like to spread negatives--so don't read this post if you don't want to hear my petty complaints. :(
The rest of the Daniel Smith order arrived yesterday. The set of paints came loose (covered in packing peanuts) inside of this sturdy white box that was inside of a larger, unmarred cardboard box. 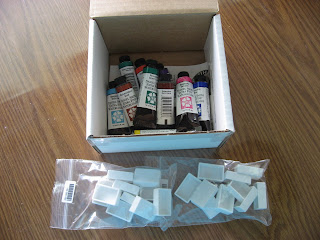 Here they are--just taken out of the box. I noticed a few dings and dents--but loose paints always get dented up just from being handled. I was surprised that they didn't come in a nice "set" box or at least with a copy of the color wheel.
http://www.danielsmith.com/Item--i-285-250-309
Whenever I have purchased a set of paints in other brands they have been packaged in a box set and the tubes looked pristine--but--nevermind, I thought. They're here! 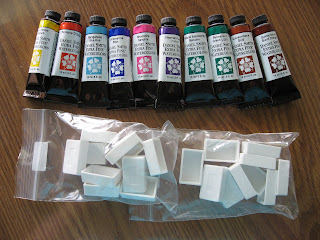 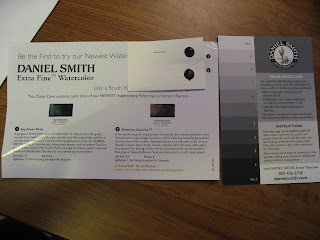 Since no color wheel came with the set I dug out the catalog and printed one myself on cardstock. Arranged and glued down the empty full-sized pans in a kind of a circle--hehe! Wanted to match the color chart. All ready for the paints, right? 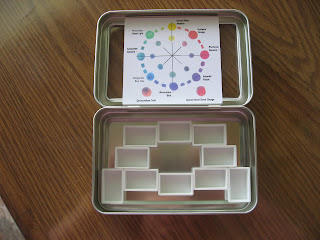 The first one I opened was the yellow one. It had been used! Either that or somebody had monkeyed with it in the store? Something odd. I thought that had to be a fluke--it had accidentally gotten past them, you know? So I went and washed it all off right away. I plugged the hole with my finger and scrubbed with a toothbrush and hot water to clean the end of the tube and the cap. When they look like this--eventually they are almost impossible to open because the cap will dry securely on to the end of the tube. And with my bad arm...
Anyways, I continue on with the filling of the palette--and find another one... 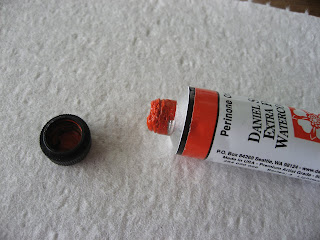 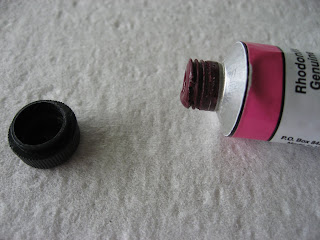 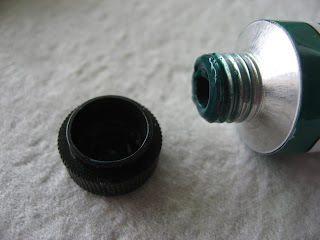 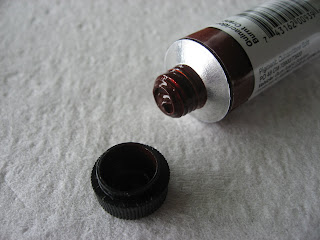 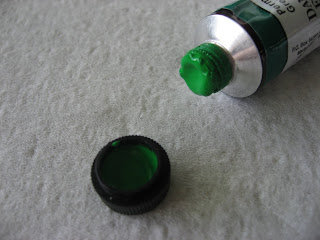 Six out of ten of them! Some of them were quite dry and crusty. Didn't come clean even with the water and toothbrush because they were so dried on. The ones that had a dry layer underneath a wet layer--well, they had to have been opened more than once, right? I had to use the gripper on a couple of them to even get them open.
Well, the palette looks nice anyways. I am obviously keeping the paints. 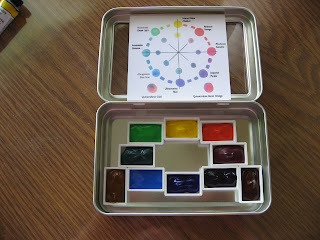 These were the five that had been opened--after I filled the palette. 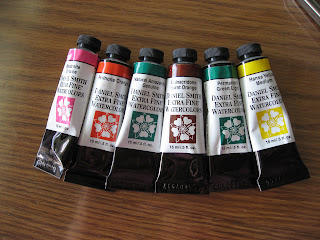 But--the more I thought about it the more disappointed I was with the company. Here I have always heard such good things about Daniel Smith and how wonderful their paints are...??
I looked up their customer service email address on their website--wanted to send them pictures so they would know what I was talking about (sent four). Told them that I was keeping the paints but just wanted to show them that they'd been opened. How disappointed I felt--like I may as well have gotten a slightly used set on eBay.
I know--not nice of me. But I certainly didn't expect to spend the afternoon scrubbing paint tubes and caps. I couldn't leave them like that. I almost couldn't get two of them open as it was. Can you see me having to call Dagan or Leah to come over to open a tube of paint for me one day? Because of the bum arm I am extra careful about keeping my paint tubes clean. Karma is just useless with paint tubes--hehe!
I got an email back. The guy told me it must have happened in transit. Told me to call customer service so they could handle my complaint. Or they could arrange a time to call me.
I wrote him back. Said they were absolutely not damaged in transit and there was nothing to handle. I was keeping the paints. Just wanted them to know how disappointed I was to get used tubes of paint. I told him they could call me if they wanted to talk to me, but I didn't know what else to say about it. Told him 1-5pm central time.
He wrote back and said--"we do not sell used tubes of paint". I could call customer service and the tubes must have been pressed in transit and they could possibly want them returned. They would want to ask more questions and they stand behind their product, etc.
I didn't call. The whole thing made me tired. I already told him that I was keeping them--that I had used them to make a small palette--that I had cleaned them up, etc. I'm not dealing with sending them back to the company.
They were packed up very well--inside a very sturdy box inside of another box that showed no signs of being crushed--(I know "pressed" when I see it)--with peanuts and packing paper, etc. And you can see from the photo that they don't look crushed or pressed when I first took them out. Handled by hand maybe--but not squished in transit. I am not willing to let USPS take the fall for this one. If people opened them in the store or if they were damaged in transit to their warehouse or if the covers weren't properly on and the heat made them expand...any of those things would be Daniel Smith's fault--not the fault of the post office.
If anybody is reading this who has purchased paints from Daniel Smith--could you leave a comment and tell me if you had opened, messy tubes? Or if you bought a set--did it come boxed as an actual set or were they just individual tubes thrown together like mine were? I am just curious.
Okay--done complaining. :)
Not my month for ordering online, eh? I sure hope there's nothing wrong with the Arnold Grummer VHS tapes now when Leah and I watch them today! chuckle!
Well, besides that, I washed clothes and watched Mad Men season two! There are four DVDs and I am on number two. April 1962. I had just turned 11--hehe! The moms and dads did look a lot like that back then--especially when they went out. Not so much at home, tho. There weren't many June Cleavers in my neighborhood. But there were a few! :)
Leah should be here any time. Craft Day! Back to making red paper for Christmas cards. I didn't get any more done on the paper cutting yesterday. Side-tracked by tube scrubbing--hehe! Oh well--it's not going anywhere, right? Later....have a good day! :):)
Posted by Rita at 11:02 AM

You have every right to expect to get a new unopened product when you spend good money on something. I would have been disappointed too and I see nothing wrong with you complaining about it.

I would have complained too!! Ya if you wanted used can find plenty in yard sales and E-bay.....geeeeeeez...sorry to hear this but don't blame you one bit!

:( Thats a shame. But I'm glad you made the bestest looking color wheel and are ready to paint now.

Let the Artist be undisturbed!

i would have been majorly peeved by something like that, especially when the guy refused to see the facts and make amends. it's obvious by the pics that those tubes had been opened before packaging. maddening! maybe consider ebay for next time. i have ordered LOTS of tube paints for delivery before and none have ever looked like that....they have been perfectly clean and new. i'm sorry this happened to you, rita.

Thanks everybody! I was really shocked and disappointed by both the opened tubes and then the shunning of responibilty for them. Still haven't ever heard from them, either.