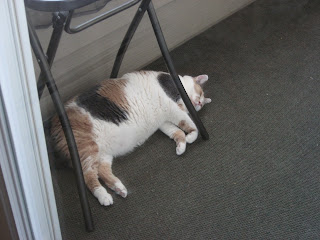 Didn't get caught up on anything online yesterday. Read and puttered a little and watched the last DVD of Mad Men season two--such a good show!
As changes mount within New York advertising agency Sterling Cooper, brilliant executive Don Draper (Jon Hamm) finds that he must work harder at staying ahead of the competition -- which includes the young execs within his own firm who are eyeing his job. Elisabeth Moss, Vincent Kartheiser and January Jones also star in this Golden Globe-winning drama, which centers on Draper's dealings both inside and outside the agency.
I was eleven years old in 1962 when these things were happening in season two--the cold war, the Cuban Missile Crisis, the space race, the beginnings of women's lib and the civil rights movement. I remember. And even by eleven you are quite aware of a "woman's place" when you are a young girl. I don't remember when it happened, but I remember it was a big deal when a wife could have a store credit card on her own without her husband's signature (permission). Women were still legally just extensions of their men. Girls went to college to "find a good husband" or have something to do in the meantime before they got married. Totally felt like a man's world when I was a child.
The majority of the moms were home with the kids in our suburban Minneapolis neighborhood when I was little. Commercialism and materialism started to permeate the culture more and more (with the spread of television and advertising--a la Mad Men--hehe!). Mom's started going to work for the extras--the automatic washers and dryers--the new color console TV and stereo record player. And then they had to work to afford the second car to get to the job for all those extras. I always felt that is what the hippies were against--the keeping up with the Joneses--how the world was becoming disposable (just like plastic diapers and Kleenexes)--and the family units were drifting apart. The main focus was becoming things and not people--and we were forgetting about the earth, you know? Well, that's how I felt as a Midwestern flower child. :)
Anyways, they will be showing when President Kennedy was shot (if they don't get cancelled, of course) and I'll be fascinated to see how the characters react. Everyone was glued to the TV for days. I remember it felt like the death of idealism and hope to me. The flower children believed in love, hope, community, sharing, conservation, equality, and ideals. No wonder I am still a flower child at heart. :):)
Now--a long wait until the next season of Mad Men comes out on DVD. :)
Miss Karma holds vigil at night--sits and looks up at the lamp for moths. 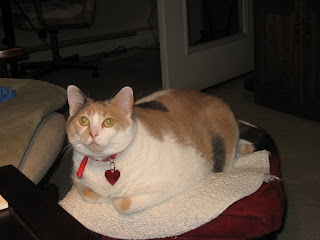 I am too young to remember much of what you talk about - I do remember my Mom getting her first "charge plate" from Visa (back in the day when there was only Visa).

My earliest childhood memory that I can identify is watching JFK's funeral. I was sick with the flu and laying on the sofa and my Dad put the TV on - about all I remember was the horse pulling the coffin down the street and wanting to watch something else - but of course it was on all (only 4!) channels.

I was only three at that time and still in England so I don't remember firsthand the events you speak of. I have watched a lot of documentaries and news events regarding it all though.

I do remember the moon landing....schools let us kids out early so we could go home and watch it on the TV.

I always say that I'm a hippie (flower child) at heart because I like their simple life and love of nature and people. :)

Intense--Maybe Visa was the first general charge card? The first ones were store specific. Each store had their own charge card and my mom had to dig thru all her cards to find that particular store's card. When they came out with the general card (Visa) that you could use at any of the stores--my mom got rid of all the separte cards.

Yes--I remember that there was nothing else on. We only had 4 or 5 channels, too, back then. I do remember little John-John saluting his father's coffin. Made me cry.

Serena--You'd have to have an exceptional memory to remember anything at three--hehe!

Funny--I don't remember if they let us watch TV at school for the landing on the moon or not. I remember watching it, tho.

I am definitely a flower child at heart! Have been told that more than once--hehe! I agree with you. :):)