I had computer troubles and was offline for a couple days. Dagan stopped by after work last night and fixed things for me. It was a virus scam actually. I clicked on an application of Facebook (for a pillow fight game) and all kinds of flashing boxes came up telling me I had gotten trojan and worm viruses. Appeared to be from Microsoft and looked very official--do this--download that. I didn't download anything, but I did the computer scan and that ended up giving me about 5-6 viruses right there, I guess. Can you imagine if I had downloaded whatever the fake Microsoft stuff was? So--FYI--it's a fake warning telling you you have viruses and how to get rid of them and it looks like it is official from Microsoft.
Anyways, Dagan cleaned out the computer and I am up and running again--virus free.
Note to anybody I know on Facebook: I am not doing any other kinds of games or applications on Facebook--period. I am just sticking with the "My Farm" game I have been doing for months.
Anyways, so what did I do while I was gone for two days? Made some paper! Since we are moving all the supplies over to Dagan and Leah's today, I wanted to make up a few sheets before it all goes out the door.
You're going to laugh! The three on the bottom there in the front are made from packing paper and Karma's fur! ROFL!! I won't do that again, but I had to try it--and I figured that would gross out Leah--hehe! I found out that fur doesn't chop up in a blender--wrapped around the blender blade--hehe! Not the best idea I ever came up with, but it did actually work. Then the next six are what I got out of that bag of 12 X 12 inch paper brand name strips that I cut into squares recently. 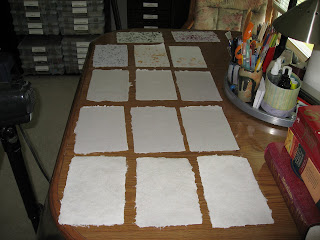 Here's a shot from the other end of the table. 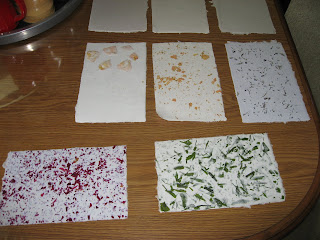 This is the Karma fur and packing paper. 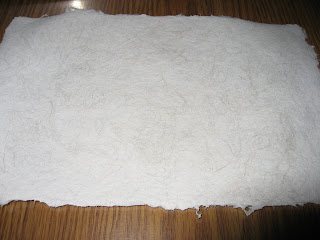 This one is white computer paper and aquarium plant. 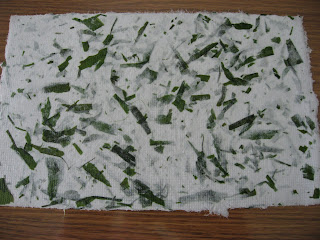 White computer paper and red rose petals from a couple of Mother's Days ago. 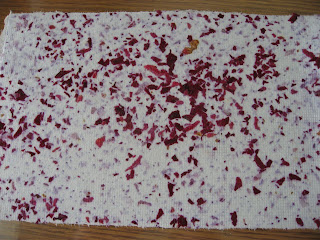 Used the cut up calling cards and some plants from Mother's day this year that I sprinkled on top of the wet pulp. These look like they might fall off, tho--at least some of them? 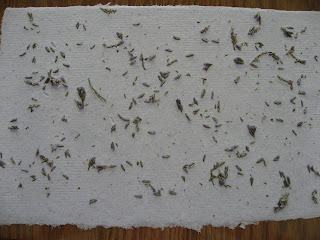 These were pink roses from this last Mother's Day and they dried this golden color? Dagan thought it looked like baby poop--ROFL! I said--no! no! Gold flakes! hehe! 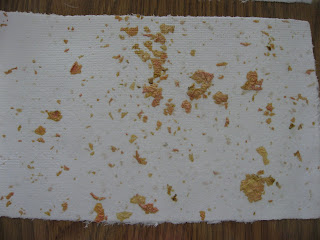 I tried setting some of the pink (golden) petals into the paper like Arnold Grummer showed in his video. I must have gotten them too far down because they were kind of completely covered. Oh well, we can throw this back in the blender if we want and try again. Not sure if I like it or not--or if there's anything I could add to it to make it look better? 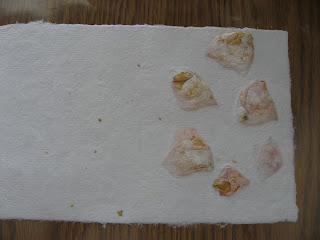 And what was Miss Karma up to while I worked away on paper here and there? Fell asleep in the chair. 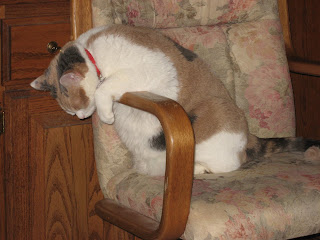 Let's see--what else? Oh--I forgot to mention that I asked at the regular dentist's if they had any idea how much more I would be billed on the sliding scale program I'm on? Nothing! Finally I am poor enough, eh? I just have to pay the $25 every visit. And re-apply every year. :)
So, I made the appointment to have my two cavities filled on August 3rd (after I have money again--hehe!). And then I just have to go get my teeth cleaned every six months--tada! Next thing--find an eyedoctor who will see me with no insurance coverage. :)
That was the good news.
The bad news--got a letter Saturday about the oral surgeon bill saying it was "past due" and threatening me with a collection agency!? I have been making my $25.00 payments every single month! So, I had to call them yesterday. The lady told me that the billing had already been through Medicare, they don't cover my procedure, and I owe $2,864.00--and they expected at least $120.00 a month! I told her I am only living on $778.00 on disability and can't pay much more than what I am already paying because I have no coverage for eyedoctor/glasses and have to pay cash for the doctor and regular dentist. She is sending me financial forms to fill out to see if they can accept lower payments or possibly get some help for me on the bill. I sure hope so! I don't want to be sharing cat food with Karma! ROFL!!
Really--it is not funny. I am dealing with the same thing as the seniors are in this country. Some are forced to choose between their medications and food. And if they insist on $120 payments from me...
Anyways, Leah is coming over this afternoon and we are moving all the papermaking supplies over to their place. That's the big project for today. Looks like a perfect day for it, too! 70s and partly cloudy--not expected to rain. :)
Glad to be back out in cyberspace!
Posted by Rita at 10:36 AM

That poor cat had to have a pretty good crink in the neck when they woke up huh?!

Both the computer virus and the crummy news about the billing/due bill are really bad. I've never understood the mentality of the folks that write those virus programs - if their skill went to do something good - imagine what they could do?

I hope you (and Karma) never get to the point of trying to figure out how to continue to eat.

I never do all the extra thingies on Facebook....I'm very distrusting because they are created by people outside of Facebook. Maybe you should email Facebook and warn them about the application?

I have had that Microsoft virus warning come up once or twice when I've entered a site on the net but Microsoft don't have an antivirus program installed on my computer so I knew they were fake. Unfortunately, my son Beau fell for it when it happened to him and we had to basically format his computer because the virus corrupted one of the main files needed to run the operating system. :(

I sure hope they can do something for you re. the bill, Rita. If you were here, you would have been entitled to all that treatment, through the dental hospital, for free being that you are on a disability/seniors pension.

Rita, I know exactly what you are saying about living like the seniors. We have been making those hard choices every week.Preventative health care goes by the wayside when money is so tight.

Glad you are OK!

Oh man Rita, you know I did that in face book too,...different application BUT I dont know how to fix it :( and my pc runs fine but laggy....UGH go figure!

Sorry to hear about the dentist bill....I know its hard all over and especially on a fixed income...hang on to your receipts and keep good records....cause as long as you are attmepting to make payments they really cant do anything to ya....This was just discussed on a radio broadcast last wekk and they said if you can prove in front of a judge you have been making payments, they cant(well they can) but a colection agency cant get any more out of you then ya got right? Don't sweat it...everyone is in a fix, even the businesses.

Hi Intense Guy!
The strange places Karma sleeps and the hard pillows she chooses you'd think she'd have a permanent crink in her neck!

Yes--if the folks who take the time to develop those viruses would put all that time, knowledge, and ability into something that helped humanity instead--whew!

I think Karma and I will be fine. They can't get blood from a rock, as they say, right?

Hi Serena!
I have been very leery of the applications on facebook, too. I only responded to that one because it came from a sweet lady (author I had talked to years ago in an online writing group) who just found me again on facebook. I'll stick to "My Farm". I should post a picture or two one day of that silly game--hehe!

Those scams are really pretty professional looking and frightening at first glance--all the red flashing "official" warnings. I don't blame Beau for falling for it. I fell for one the first week I got my first computer bak in 1998 and it took a couple weeks for me to figure out how to use a debugging program to get rid of it all. I didn't know what "scroll" meant and they were trying to help me over he phone--ROFL!! I had AOL at the time and they talked me thru it over many phone calls. I had dial up--and only one line so I'd have to call them, write everything down, hang up, and try to go do it on my own--my goodness!! (Dagan was in college up here and I was down in Minneapolis at the time.) Even I know a lot more than I did, I guess. But I am still sooo ignorant when it comes to computers.

If it wasn't for the hot, hot weather you have and the huge, huge spiders--I'd move to Australia--ROFL!! Maybe nice, cold Canada is more for me? :):)

Frankye!!
Long time, no see! I know what you mean! Preventative is optional when the purse strings are tight. Hope you are doing okay? Good to hear from you! :) Email me! soulcomfort@gmail.com

Hi Rebag!
I don't know how to fix it, either. Dagan goes someplace online and gets a virus protection program and runs it on my computer. ?? I know they sell them at Best Buy and places like that. The only thing I know when they get all slow and don't work right is to scan for viruses and to defrag them. But Dagan or Leah always does this for me--or starts the programs for me. Duh! Not sure if that is much help?

I am on "My Farm" which is different from the "Farm Town" game. Silly fun, eh? I really should post a picture of my "My Farm" one day--hehe! I have like 3.5 million dollars in my farm bank! I am fantasy rich, I guess, eh? :)

The huge dentist bill--yup! Like I said--can't get blood from a rock. I just keep making payments. Hummmm....I'm really close to Cananda--hehe! :):)