Last Thursday, after Dr. John's, Leah and I went to PetSmart. I wanted to get some better seed for Miss Gracie and some taller plants for the aquarium. Saw a tiny, cheap cage for Gracie for the porch. Sure, it's like spending time in a closet for her compared to the mansion she lives in--hehe! And--I have to manhandle her to get her out of there and actually catch her because she is not smart enough to duck when I try to take her out on my finger...but she is getting used to it. She is amazed with the wind and just the fact she is in a new spot. 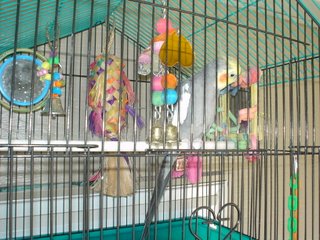 I had to get on my folding stool to take a picture of her. Well, I always have to get on the folding step stool just to get her in and out of there (only 5'2"). 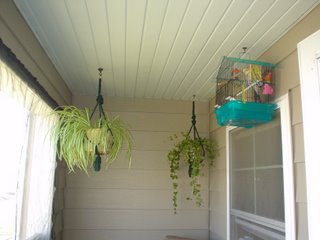 As you can see, the cage is set high up in the ceiling. Gracie can feel safe and look outside and still see Karma and I when we are on the porch. Leah drilled the hole and put the hook up for me. We have it close to the building so her cage leans on the wall and won't flip around in the wind. It is a tad windy in Fargo. (Very windy today!)

Anyways, it's been a while since I've written! Dagan has been working every day on my computers since Saturday. It takes a lot to completely re-do two of them. He's not done yet. Has been coming over on his lunch breaks this week and was here till 8 pm or so on Monday after he brought me to Dr. John's. I have left them both alone after he leaves so they can finish doing whatever they were doing. He's closer to done now and I can get online again. Ta Da!

Since I last wrote--despite the fact I have been feeling in more pain, my spine is actually better--hehe! My re-check at Dr. John's showed that my spine is getting more balanced and so I graduated to two times a week! Nice! I will be going on Mondays and Thursdays now. Bones being more aligned doesn't neccessarily mean I am in less pain from my overdoing it. Fibro is in the muscles--connective tissue. Thursday Leah and I will find out the results from all the testing we did, also.

Meanwhile, I have also watched the rest of Season One of Deadwood and love that show! I still have the specials disc from season one coming. At first it was a bit of a shock watching HBO--the swearing, nudity, sex--but it is very much a part of the story of Deadwood. The acting is superb! There are so many layers and storylines going on--you find yourself invested in the characters from the first episode. The atmosphere and the variety in language and costumes--I am enthralled! Makes you wonder where you would have ended up if you had lived back then? Looking forward to watching Season Two. But first I have ordered the rest of Season One of The Sopranos and Six Feet Under.

A couple of nights ago I was cooking in the kitchen. The apartment was closed up with the three fans going to move the cooler air into the bedroom (close to 100 degrees) and I also had the fan on over the stove. I kept hearing Karma crying about something. I thought she wanted to go out on the porch, but I couldn't see her by the porch door when I looked over there. I kept talking to her and telling her I'd be there in a minute while I got things set up to cook for a while with the stir fry I was making. When I was done, I came around into the living room and Karma was backing away from something and she sat down in front of the bookcase next to the cage when she saw me, very tall, looking fascinated but totally stressed. I come around and see Gracie following Karma around on the floor!!

That Miss Gracie is not the brightest bulb on the tree, to say the least. I definitely got the impression that Gracie had been trotting about following Karma and that was what Karma had been trying to tell me. She was begging me to come and get Gracie away from her--take away the feathered temptation! She might have even been trying to lead her back over to her cage?? I was sooooo proud of Karma for not killing silly Miss Gracie who knows no better, is so fascinated by Karma, and obviously was not in line when they handed out survival skills. But for a moment, when I came around the corner and realized I had not heard Gracie take off from her cage with all the fans going and my weak ears, I was struck by fear. Karma got some praise and loving up, I tell you! She truly does realize that Gracie is a member of the family, too.

I have always trusted my angels/guides (GA and Troops) to help me pick out cats who can live with my birds and other pets. I had to search for Karma. I am filled with gratitude for all their love and assistance.

Well, I should be back to blogging and answering email regularly again now! I believe Dagan is just down to the installations of programs and hopefully we won't have any more glitches. :)