Thought I'd throw in some visuals for the Karma not eating Gracie story. 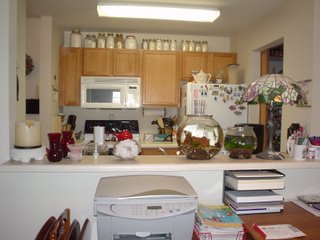 I was trying to look up and over this hole in the wall between the kitchen and the dining room to see what Karma was crying about that day. 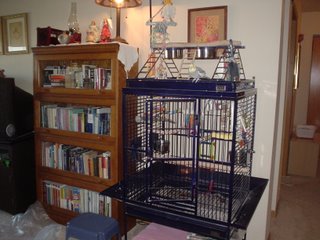 Karma sat down right where the little blue stool is today--next to Gracie's bird-mansion. (She thinks she is a much larger bird than she really is.) Gracie was struting about right under Karma's nose and Karma was sniffing towards her, but seemed afraid to get close enough to her for even a good smell.

The bag you see to the left of the stool is yet another temporary Karma toy. One man's trash...

This is my bookcase for popular, spiritual, religious, self-help, literary magazines, bookcrossing.com, and energy work books. Kind of the catch all bookcase. 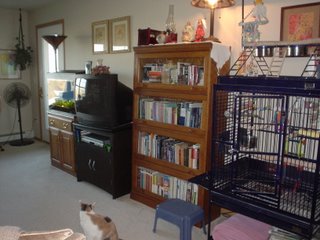 I removed the bag to the kitchen garbage can. Karma didn't seem happy about that--ha!

The stool is by the cage for their little game. When Gracie is shut inside she comes right over to that side to entice Karma to come and visit her. Karma gets up on the stool and gently paws toward Gracie, who always backs up out of Karma's way, and then Gracie comes forward again to tempt Karma to try to touch her once again. They play this little teasing game. Karma usually tires of it long before Gracie does. And now I know, obviously, that Karma wouldn't immediately hurt Gracie if she actually had the chance. At least not while I was up and around...ha! Left alone long enough, I think nature would certainly prevail.

Dagan came over lunch today again and is about finished. Just a little more. Then I can have him try to help me figure out how to work on my website again after he is done with the remaking of the computers' brains. I have changed the host I use and the program I am going to be working with, so I am totally lost. Dagan has never used Front Page, either--so he will have to learn about it himself in order to teach me.

Tonight we meet at Dagan and Leah's for our painting session--finally. Jennifer has decided not to join us after all. The first time the three of us met was three weeks ago, already. I now have some additional colors, retardant to slow down the drying time, and the gesso that I need to scumble my sky, too! So, should be fun!