Here's a picture of Dr. Mike who bought the business from Dr. John. 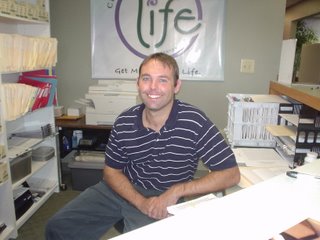 They are having a little gathering on Thursday, August 17th at 6:30pm to meet Dr. Mike. Perfect for Leah and I because we already go on Thursday nights. We can ask questions and get to know him better. Oh, and they will have little Ceydee there, too! Dr. Mike's been around the office lately--even before they announced he was going to be the new owner.
I didn't write this afternoon because I spent it trying to catch up on a few emails, actually. Then Dagan came and picked me up for my adjustment with Dr. John. And I really needed it this time! All the climbing around I did on Saturday in the kitchen putting away the strange flours and lotus root and such--I must have twisted my butt bones out of whack? It was the first time since I was very first going to Dr. John that I had the sharp, shooting pain in my tailbone when I went to get up after sitting! How quickly one forgets--hehe! Whew! And I had that pain all the time for about three years!! Dr. John hammered on my tailbone and my head (said they were connected--hehe!) and told me I might be sore for a while. Well, I was already sore when I got there--ha!
Dagan and I left and went to SunMart to buy groceries and I could feel it was sore while I was walking, but the walking kind of worked it out, I think. We'll see when I get up after blogging and answering email now tonight--ha! I think it might be gone again, tho. Didn't have it too much over at Dagan and Leah's while we cooked and ate tonight.
Tonight we made Beef with Oyster Sauce and made fresh organic broccoli to have with it. Was really good! Better than the Mandarin Orange Chicken from last week. In fact, Leah didn't like the Mandarin Orange Chicken and Dagan got sick of it after a second helping--so the rest of those leftovers came home with me tonight--chuckle!
Leah and I are going to cook something on Thursday night after Dr. John's, too, this week. So, I can look up another recipe to try. We might swing by the little farmer's market on Main and Broadway, too.
Last night we had our monthly Sacred Circle over at Dagan and Leah's. Jennifer picked me up and dropped me off. Was a very nice meeting! After the talking piece and the burning bowl ceremony, we did the Angelic Messenger Cards and everybody got very appropriate cards for what we wanted to know. We were really connecting, I guess, and the universe was overflowing with guidance! A very positive evening.
I watched Chicken Little this weekend and I thought it was a perfectly awful children's movie! I would have never wanted Dagan to see that when he was little. It had alien mechanical beings (looked like overgrown spiders with red eyes) who were chasing the little animals and zapping things into oblivion (you found out much later that they didn't actually kill and/or destroy the things that they had made vanish with an explosion like effect--they were just held as floating captives inside a space ship?). The aliens were flying down & slicing/mowing parts of the cornfields the animals were trying to hide in--like flying rotating blades! They were going to destroy the earth and kill everybody and everything--so the "oops, we're sorry" ending and we'll put everything back--was just too little, too late. It was way too scary for really little kids, I thought. Or, if people think it wasn't that scary for little kids--well, then that's just way to scary for me!! To think kids wouldn't be scared by such things anymore....
I guess I will go watch Tsotsi, which I never got around to this weekend. :)
Posted by Rita at 9:18 PM