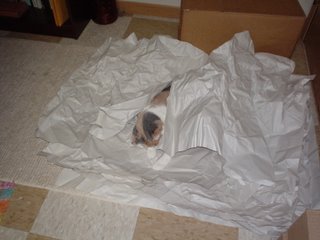 Yesterday I flattened out the packing paper from the box of supplements to save for recycling and making handmade paper out of later. Karma crawled under and pawed away at holes and tears--had a great time. Cheap cat entertainment!

I started the supplements today. Just getting them all down will increase my water intake-hehe! I will have to start eating something three times a day, too. My! My!

I watched All About My Mother.

An Oscar winner for Best Foreign Language Film, writer-director Pedro Almodovar's compassionate tribute to women examines the life of Manuela (Cecilia Roth), who leaves Madrid for Barcelona shortly after she witnesses her son's accidental death. She reunites with an old friend (Antonia San Juan), a pre-op transsexual prostitute, who introduces her to Rosa (Penelope Cruz), a pregnant nun. Their fast friendship binds them through many struggles.

The transsexuals weren't pre-op, as far as I could tell. There were two persons who were very deliberately bottom half born male and top half constructed female due to breast implants and plastic surgery--but they had no intentions of doing a total switch any time soon. One had been like that for over 18 years and was the father of Manuela's son who died. Don't want to say anything else in case anybody watches it. It was very interesting and was mostly about the bonds and friendships between women--born or wannabes--chuckle! Penelope Cruz looked so young in the film, but it was only made in 1999. How old is she anyways?

I spent most of my time today (after sleeping most of the day away because I went to bed at 6am--I am really on the night shift lately) checking out www.Eons.com. It is soooo new and in need of a lot of tweaking, but I am gradually learning how to navigate the site. I have to take notes to find my way back to places and people. It is nice to find a new website, tho, that is for people over 50. I told my sister and she is checking it out, too! (I find it hard to believe that my baby sister is over 50!)

I am the oldest, born in 1951, in Minneapolis, Minnesota. My brother and sister were both born in 1954--my brother in January and my sister in December. All 100% Swedish, short, a bit stubborn, and near-sighted. My folks are retired in a trailer park in Florida. They come back up to Minnesota for the summer to their trailer in Clearwater. My brother and sister still live in the Twin Cities (Mpls/St. Paul), but I moved up here in 1999 to go to college (never finished due to health decline) and have been here since then. Will most likely be here for some time to come. If I wasn't so sore from being at this computer enough already today, I'd fill in more background for the people who don't already know all about me--it will have to wait till another day. I'll be back! :)