It's thundering out, so I'm not sure how long I will be able to write. I usually shut down the computer if I see lightning. The rain is light and coming straight down, so I haven't had to even close the windows so far.
Yesterday was a movie watching day for me. Watched Apres Vous:
A man's life changes forever with one selfless act in this romantic comedy. After stopping Louis (Jose Garcia) from committing suicide, well-meaning waiter Antoine (Daniel Auteuil) begins to feel responsible for the depressed man. Continuing to play Good Samaritan, Antoine decides to help Louis win back his ex-girlfriend, Blanche (Sandrine Kiberlain). But the do-gooder doesn't foresee the earth-shattering effect that Blanche will have on him. ...
Subtitled and French, I believe. Was one of those kind of silly romantic movies--a bit predictable, but entertaining. Nice to watch something light in contrast to The Sopranos--hehe!
Then I watched a strange, but intriguing movie called Winter Passing:
Upon learning that a publisher will pay dearly for the love letters her novelist father (Ed Harris) wrote to her late mother, Reese Holden (Zooey Deschanel) returns to Michigan after seven years away from home. But instead of the reclusive man she expected to find, she discovers her dad has formed a deep connection with the struggling musician (Will Ferrell) and ex-grad student (Amelia Warner) who now live under his roof. Amy Madigan co-stars.
It was the kind of oddball, character movie that I enjoy when they are done well. The daughter discovered that this peculiar group had formed a kind of family unit in her absence. She and her father had to either work out their differences or remain forever estranged. I was surprised that I enjoyed Will Farrell's portrayal in a bascially serious role--he provided just a touch of sad humor. He was pretty good. I think Ed Harris is a competent actor who enjoys taking on a variety of roles--this one was dark and the character was much older than I am used to seeing Ed Harris play. He was very good--as was the girl who played the former student, Amelia Warner. Can't say it had the best ending, but it was satisfying, I guess.
Then I watched some more of The Sopranos-season three. Tony's horrible mother (who had put a hit out on him) died a natural death and it was oddly unsatisfying--hehe! Quite the post-funeral gathering at the Soprano house--hard for anybody to find anything nice to say about that evil, nasty woman--chuckle! Tony's greedy sister has now kind of taken over the role of family member who you most want to see "get their just rewards"--ha! And you keep waiting for something to happen between Tony and his psychiatrist...
Since Miss Karma is usually within eyesight 95% of the time, even in this tiny apartment, I wondered where she had disappeared to late this afternoon? I hadn't seen her for quite a while. She only occasionally goes off to sleep--uninterrupted--finds someplace where she can't be disturbed, if she is really tired. I discovered her in a new spot! Curled up in the bottom of the pantry on a bag full of plastic grocery bags... 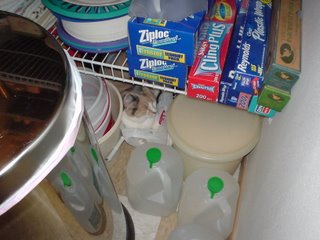 I went to throw something away in the big silver trash can and she meowed at me down there just to say hello (and let me know she was there just in case I was about to set something on her or squish her or anything, since she knew darn well I didn't know she was there and because she has never parked herself in the pantry so she isn't quite sure what I may or may not do in there). She startled me, of course. Even tho she always enjoys getting one over on me and usually cavorts with delight at scaring me, she was too tired to move...so I got her back by annoying her with flashing a couple of pictures--hehe! 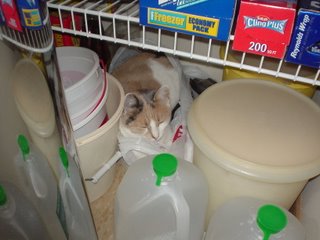 The rain has apparently passed thru already. The field and grass smells with the fresh rain. It is still much darker than it would normally be. Too dark to read on the porch.

I have been milling things over the past few days. Wondering about my health, the 100%healing thing, my purpose in life, my faith, my path so far...not quite the "dark night of the soul" I suffered in my youth, but maybe more of a "dusk of the soul", I guess. Haven't figured anything out yet. Still just pondering and milling and questioning....