Didn't sleep well last night. I actually think part of it was just being nervous about bringing all the pills back today and, subsequently, wondering if I'd feel okay to even make it there today. So far, so good. Leah will come after work in less than an hour, so looks like it might be a green light today??
Yesterday I watched Elizabeth I made by HBO as a miniseries:
Helen Mirren earned an Emmy win for her portrayal of Queen Elizabeth I in this HBO miniseries chronicling the effect of the monarch's public role on her private life. Unable to wed the man she loves, the Earl of Leicester (Jeremy Irons, who won an Emmy for his role), Elizabeth flirts with the idea of marrying a French prince and later sets her sights on the earl's stepson (Hugh Dancy). This historical drama scored the Emmy for Best Miniseries.
I really liked it a lot! Helen Mirren brought reality and humanity to the part and showed the woman behind the image Elizabeth herself helped to create. I watched the DVD specials and they said they took great care to represent the facts of her life as best they could and claim it is the most realistic portrayal that has been done so far. I really enjoyed it!
Last night I could hear Karma talking to me while I was making dinner, but I couldn't find her. It was kind of like "Where's Waldo"?! 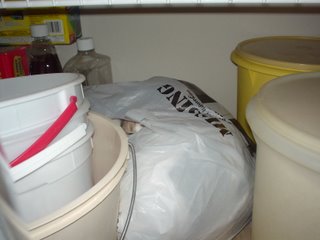 Today we bring back the supplements. 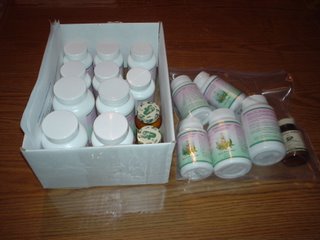 I do hope it goes well and they are willing to reimburse us. I know they probably can't for anything that is opened (zip-lock bag)--we don't want them, regardless, so we are bringing those back, too. Leah has even more than I do! She had over two boxes this size. We both feel so badly because we really like Dr. John--and he had the best of intentions--and he has a new baby--and they're moving... *sigh* That is why this is going to be so difficult. :(

Anyways, Leah will be here soon, so I have to finish getting ready. 82 degrees and sunny again today! They're talking thunderstorms tomorrow--but it is yet another beautiful day today!! :) After Dr. John's we go over to Dagan and Leah's apartment and tonight is Painting Night (acrylics). Not sure I am up to it, actually, this time. But--Leah and I are going to go thru our Shaklee order and put it in together tonight so that we can get the August specials. She and Dagan are going to spot me the money, Leah said. So we will be able to start on the Shaklee sooner this way and save some money!! Nice! Got to get moving...