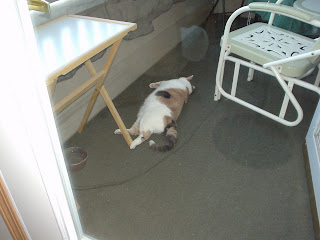 I don't think I will ever understand why cats, with all the hot fur, like to lounge around in 90 degree heat? Could possibly get up to near 100 degrees today--according to the weatherman last night. Then it is supposed to cool off a little--which, of course, means rain again.

I played and played with the new brush from Haiying and the new practice paper. What a great time I had! The Shaklee order came--Leah will stop by some time today and pick it up. I watched an excellent movie called The Dead Girl:

A small close-knit community near Los Angeles is thrown into turmoil when the brutally desecrated body of a vibrant young girl is discovered in a field. A series of seemingly unrelated dramas in the lives of the town's residents ultimately converge and reveal answers to the murder itself. Toni Collette, James Franco, Giovanni Ribisi and Mary Beth Hurt star in this dark Independent Spirit Award-nominated mystery directed by Karen Moncrieff.

Now a lot of people might not like it because of the subject matter, but I thought it was done with such honesty and heart--I was glued! The movie is done in segments and each segment focuses on a different person and the way that this murder touched their life. All the actors were amazing! The movie made you think about communication (or lack of) and how people want to love or be loved or to feel safe. It is a movie that has stuck with me.

I kind of needed something lighter after watching The Dead Girl -- luckily I had Because I Said So:

I ordered it because I enjoy Diane Keaton. It was entertaining. Really a woman's movie--mostly about sisters and mother/daughter relationships. Cute with a touch of crude. There are no Doris Day movies anymore--hehe!

I slept till 10:30am. That is the latest I have slept in the morning for 2 1/2 weeks. It's already almost 90 degrees out there. Heavy and humid. Hope you have a nice day!