Here's the sample painting that Haiying sent along with my order. This is what she referred to as brown paper towels. ?? I have never seen anything like this in a public bathroom around the MidWest. It is thicker and nicer than the paper towels I got from Office max. And looks white or cream colored to me. Oh well--mine work for practice, too, I guess. 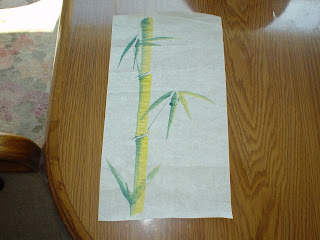 Since it was a noodle day yesterday, I watched a couple of movies with subtitles and finished the Dark Tower series. Yes! Finished!! And--yes--I am done with Stephen King. Enough said--otherwise I could go on and on--hehe!
The movies were both really good!! I watched Letters From Iwo Jima:
As tens of thousands of Allied troops push further inland, the Japanese troops defending Iwo Jima during World War II prepare to meet their fate in this Clint Eastwood-directed Oscar nominee for Best Picture, a companion piece to his hit film Flags of Our Fathers. Japanese Gen. Tadamichi Kuribayashi (Ken Watanabe) knows his men are outnumbered and, with no hope of rescue, that most will eventually die in battle -- or end up killing themselves.
It was really interesting to see the Japanese point of view and what it was like for them to be tunneled in and waiting to die with no hope of support from the mainland--and to hear their letters home and from home. I loved the fact that it showed that the young soldiers on either side were basically the same, you know? They did have different general views about honor and fighting to the death. You saw the good and bad in the men of both sides. I really liked it!
Then I watched The Road Home:
Veteran director Zhang Yimou this time trains his camera on a love story between a Chinese boy and girl that endures for 40 years. Starring Zhang Ziyi (Crouching Tiger, Hidden Dragon), The Road Home tells the tale of Zhao Di (Ziyi) and how she met the love of her life, Luo Changyu -- a new schoolteacher assigned to teach the children in her small village.
I just loved this movie, but for very different reasons. This was really a love story--a different kind of love story. Found myself wiping away tears and blowing my nose--doesn't happen to me too often. :) The girl in the story--Zhang Ziyi--was absolutely excellent!!
Both movies were so good that they kept me awake--no matter how tired I had been. And then I began reading the end of The Dark Tower and was so close and wanted so badly to just be done with it that I stayed up until 12:30am finishing it. DONE!! Two endings--one fairly happy, but leaving the main character and a new one in limbo and the other one leaving Roland in a kind of perpetual hell--and the new character with special powers still in limbo. And then a defensive aside tagged on after the endings telling the reader why it was not pretentious of him to put himself in his own story--it was just logical. Enough said. I feel like a weight has been lifted off of me! I am so glad to be finished!!! Free!!
Long days and pleasant nights, Mr. King.
I started making paper this morning. Put together two sheets already and might do two more later on. I might be able to get in six a day if I spread them way apart? We'll see. Fun! Have a great day!!!
Posted by Rita at 11:18 AM