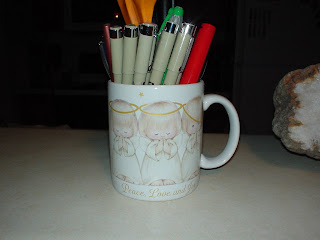 Another angel object for today--a cup I got from Lynnette!

So windy today that it blew one side of a livingroom screen part way in! Had to close the living room windows. My goodness! Talk about gusts!

I watched The Painted Veil this morning/afternoon:

Shunned by a husband (Edward Norton) who's more interested in his research, the simpleminded Kitty Fane (Naomi Watts) embarks on a quest for life fulfillment. Along the way, she ignites a passionate affair with a dashing womanizer (Liev Schreiber) and travels with her husband to the Far East, where she turns her attention to fighting the cholera epidemic. Diana Rigg co-stars in this period drama based on the novel by W. Somerset Maugham.

I loved it! Was engrossed by the story--and the acting was excellent! There was a lot more to it than the little blurb above from Netflix. don't want to say much in case somebody plans to see it--but I really enjoyed it. Another world--another time.

Dr. Taylor Biggs (Billy Zane) is haunted by a past that's not his own. A hallucinatory drug gives him the power to see visions of vicious crimes, visions made all that more disturbing when he discovers that the murderous memories may belong to the father he never knew (Dennis Hopper). Ann-Margret co-stars as Biggs's mother, whose own failing memory makes her powerless to help him unravel his family history.

First of all whoever wrote this blurb for Netflix got it all wrong. Dennis Hopper played his step-father--Taylor didn't know who his father was. And his mother with Altzheimer's wasn't played by Ann-Margaret--she played a friend of the family. It was a complicated mystery, so I can see where they got confused--hehe! But I still had pretty much guessed who the murderer was about half way through--and was correct. I enjoyed the whole concept of having somebody else's memories. There were a few gaping holes in the story, but you could let them slide, I guess, since it was pretty far-fetched to begin with--hehe! Was pretty good.

And I also watched Off The Black yesterday:

In director James Ponsoldt's gentle drama, an unlikely bond forms between high school pitcher Dave Tibbel (Trevor Morgan) and reclusive, ailing umpire Ray Cook (Nick Nolte) after the youngster vandalizes Ray's home. Estranged from his son, Ray offers to forgive Dave's debt if he'll pose as Ray's son at an upcoming class reunion. Meanwhile, Dave must contend with his withdrawn father (Timothy Hutton), who's been a wreck since his wife left him.

This was better than I thought it was going to be. Had a little more depth to it than you would have thought at first--probably because it didn't take the course you would have expected. Okay little movie.

I had been ordering so many series DVDs that I decided to take a break and just watch movies for a while. :)