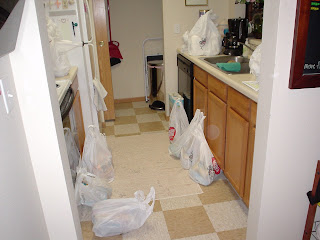 CashWise delivered on Saturday. I was feeling a little better so then there are things to do--like wash clothes. I didn't get much sleep yesterday (up for the delivery)--but slept for about 12 hours last night! Sick and tired of being sick and tired--hehe! Just don't want to talk about it anymore--because I am on the mend. :)

Déjà vu -- that powerful but fleeting sense that you've been here, or met someone, before. ATF agent Doug Carlin (Denzel Washington) finds himself dogged by that feeling as he investigates a bombing on a New Orleans ferry. Should he shrug off the unsettling sensation, or can it help him unravel the clues he needs to save hundreds of innocent people from disaster? Directed by Tony Scott, this thriller also stars James Caviezel and Val Kilmer.

Was okay--a little hard to follow when time was overlapping. Not as good as I had expected it to be--but Denzel is always good. Then watched Fur:

Nicole Kidman stars as controversial photographer Diane Arbus, an acclaimed artist who took her own life in 1971, in this provocative biopic. Known for her bizarre and often disturbing black-and-white images that captured both the mundane and the unusual with a dreamlike clarity, she became the first American photographer to have her work exhibited at the Venice Biennale -- but not until after her death.

I'm sorry--I thought it was just stupid! Not too often I get movies that I don't like, but sometimes you do. They stated that it is a made-up version of her life or something to that effect, but you don't feel you got to know much of anything in this dreamy, moody movie. Her husband was a photographer and she had two kids--maybe that was true? She met a new tenant in their building who moved in upstairs--and he was a dying dog-boy (completely covered with hair) from the circus and he had all these circus freak friends which they showed you briefly. She falls in love with him and spends all her time up at his place--even overnight--and her husband doesn't really say anything? Before the dog-boy dies--he asks her to shave him. She does and they make love. In the end she apparently leaves home with her camera. Dumb--was just dumb. To me, anyways. Sorry if I ruined the movie for anybody. I think they were trying to get the point across that people are just people--no matter who they are or what they look like--but it missed the point somehow.

Then I had rented the first season, first DVD, of Cracker:

This popular PBS series stars Robbie Coltrane as Fitz, a deeply flawed criminal psychologist addicted to gambling and drinking. As Fitz profiles and questions suspects in police investigations, he ventures into the minds of potential criminals who just might be saner than he is. Series 1 witnesses Fitz as he battles the demons in his own life while trying to solve a series of murders.

I really liked it and will rent some more. Robbie Coltrane plays Hagrid these days in the Harry Potter movies--the huge hairy guy that everybody loves. In Cracker his life is a shambles due to his drinking, smoking, gambling, and general gruffness. The storyline in the first two-parter was very interesting and kept you guessing right along to the end. Cracker, himself, is very dark and kind of nasty. That could get to you after while, but I am willing to watch some more. It stayed on the air--so my guess is that they had to show you other sides of him or tone him down a bit. ??

The sun has peeked out this afternoon!! There's food in the house, clothes are clean, the bed is freshly made, Gracie is quieter today--life is good!! :) Hope you all had a nice weekend!
Posted by Rita at 5:35 PM