Karma watching people leave for work this morning about 7am. We have been up all night and sleeping from afternoon till like midnight--crazy hours! Crazier than before--hehe! 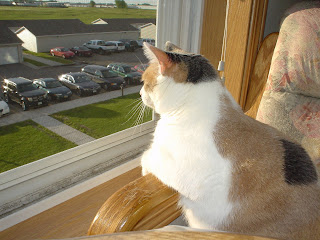 Karma was obviously a little tired this morning..... 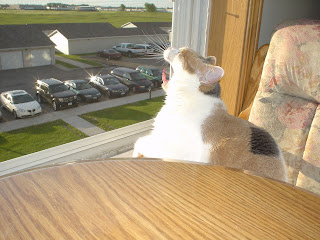 ...but the swooping swallows are worth skipping another nap--hehe! 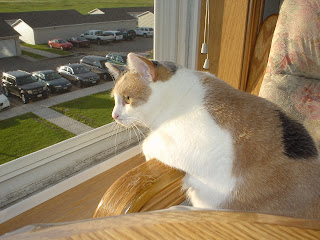 Another bright sunny morning. Supposed to be hot by this afternoon, tho--just like yesterday. Scattered thunderstorms, tho--again--this afternoon, too. Rain--rain--rain! We could use some more sunny time to dry things out around here.
I have been being good and watching movies. Last night I watched The Good German:
U.S. Army correspondent Jake Geismar (George Clooney) gets caught in a web of intrigue involving ex-flame Lena (Cate Blanchett) in Steven Soderbergh's drama set in post-World War II Berlin. Lena's missing husband is hunted by U.S. and Russian military, and in desperation, she looks to Jake for a way out. Tension mounts as Jake discovers Lena's been keeping secrets and the black market dealings of his shady driver (Tobey Maguire) come into play.
It was really put together to look and sound like one of the old movies from the 40s--even the way they did the credits. I got a kick out of it because I like the old black and white movies--and that way they could take actual newsreels from back then and insert them seamlessly into the film. It was weird to see Toby Maguire play such a creep. He was good at it! I think he was only in the first half hour of the film, but he was memorable. George Clooney--he really had "the look" from that time--could have fit right in back then! The ending had a Cassablanca-like spin to it. Just was a bit of camp--yet serious enough and filled with plot twists--was pretty good.
I also watched Serenity. I had rented the Firefly series and was so disappointed that it had been cancelled. Apparently so were a lot of fans. They made this movie to tie things up for the many, many fans of the series--and it was really good! Loved it!
Picking up where his cult show "Firefly" left off, writer-director Joss Whedon's tale of galactic unrest follows Malcolm Reynolds (Nathan Fillion), captain of the transport ship Serenity, and his scrappy but loyal crew. When the ship picks up two new passengers -- fugitives from the powerful coalition ruling the universe -- "Mal" and his mates find themselves at the center of a cosmic conflict, pursued by military forces and space-roaming savages.
Today I have a couple more movies to watch. I may test out my arm a little before I fall asleep this afternoon/early evening. (I am quite literally sleeping my way around the clock.) Just glad to sleep whenever I am able to with this crazy menopause--hehe! I may be sleeping odd hours--but I am sleeping again--hurray!! :):)
That's about it from Fargo for today. Have a good one!
Posted by Rita at 7:13 AM