Dagan showed up first with more of the painting supplies--canvases and such. He took out my cart full of stuff to my garage for me. Leah was on call for Vally Video and had answer that first. She showed up later with Taco Bell for all of us. :) 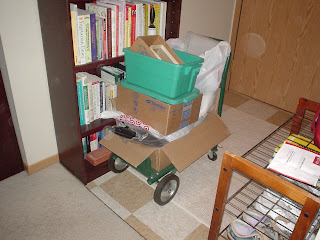 They put the pails on the two outside plants for me. Thanks, guys! That one in the corner is really scrawny. I didn't think it would survive the summer. Maybe it will do better inside this winter. 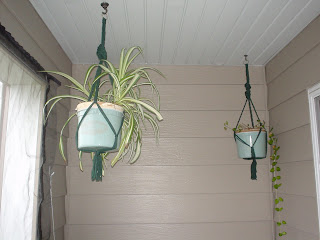 It was so nice to see them. They are waiting on an appraisal on the house to be built--I guess that is the last step before the decision is made? I sure hope it all works out for them. The loan official at the bank is helping them with it all. He seemed pretty conservative to begin with, so I don't think he'd lead them astray. Should find out pretty soon.

I have still been up all night and sleeping during the day. Karma likes to come up and sleep next to me at the computer, especially in the middle of the night. I had to put two little stuffed critters in her way or she lays her head right on the keyboard--does strange things to it and has even frozen the screen up several times. Now that the little stuffed animals are there she curls up next to them and my keyboard is safe. 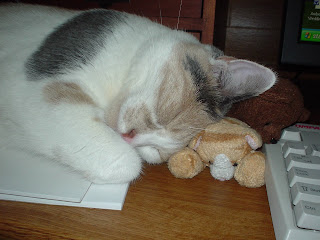 May look a little strange when people see these two little critters piled almost, shall we say, inappropriately on top of each other for no apparent reason--chuckle! There's a legitimate reason for the odd placement--had to make them as high as possible or Karma just laid her head over them right onto the keyboard--haha!
It has felt like Fall! Chilly and damp--in the 60s during the day! Feels like October instead of August. August is usually so unbearably hot. Strange weather, that's for sure. This can't be good for the farmer's crops if we don't get some warm weather here pretty soon. Feels like, if this keeps up, that we will have the leaves changing. Like I should get the winter clothes out already. Odd.
I am one of the people who actually doesn't mind it at all. I love sleeping with the window open when it is 50 degrees outside. In fact, I have the fan in the window and love to cuddle under the blankets when the room is cold! Ummmm! I prefer it colder rather than hotter. Always have.
Anyways, I need to rest up for a couple of days, but I am so thrilled that I am finally done with the cleaning/reorganizing project!! Relief!! And--thrill--I have a Deadwood DVD to watch!! I love that show and have waited a long time to finally start getting Season 3--which I believe is their last season? :( So, as long as I have to be good for a while, I have something great to watch tonight! Hurray! Later. :) :)
Posted by Rita at 7:55 PM