I got all the additional painting supplies Dagan and Leah had returned piled on to the table yesterday. That is as far as I got. 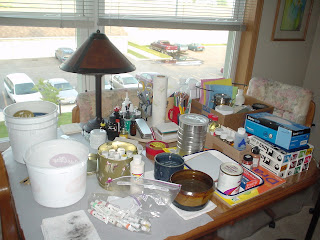 Caroline came to clean yesterday, so I wanted them off of the floor. Karma wanted to go out on the porch to sleep in the heat to avoid the vacuum cleaner. Right after Caroline left, the maintanence man came to check out the dryer. By the time Karma decided she wanted back in--he had already pulled the dryer out, stuck this contraption down the vent, and gone outside to find the vent hole on the side of the building.
Naturally, Karma was amazed that the dryer was pulled out for some mysterious reason and wanted to sneak behind it to investigate. I told her not to go back there--but she was creeping cautiously to peek behind the dryer anyways. She had just reached her head behind the dryer when something made a loud rattley noise back there. Karma came racing past me--puffed up twice her size! I went to go look. The contraption was being bobbled and jiggled on our end of the dryer vent, so I knew he had found the exit vent on the outside of the building.
Turned out there was a bird's nest in the end of the vent! The birds had closed off the inside of the end of the vent and then built a nest right on the very end of it. Over time the dryer dust had really plastered it shut completely. What I had smelled was just plain dryer exhaust coming into my apartment, I guess. Yuck! So--we now think we know what the problem was. I will find out for sure when I wash clothes next time. :)
Meanwhile--all evening Karma kept vigil in the hallway by the washer and dryer doors. 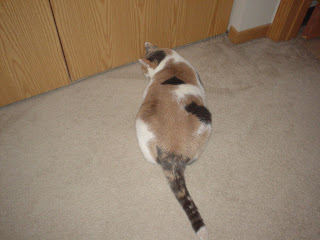 She was convinced that thing was alive! Some kind of animal that I don't realize is hiding behind the dryer. She may think she is now brave enough to kill it--(in her dreams--or maybe her nightmares--hehe!)--but she was absolutely terrified! The only other thing I have seen scare her that badly was the fire alarm--she abhores the fire alarm! 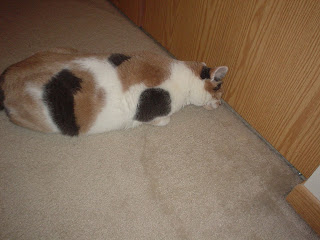 She even slept in the hallway last night. I saw her in the dark--a safe distance, across the hallway from the actual doors, mind you--on my trips to the bathroom.
She is losing a bit of her diligent interest today. Cracks me up, tho! I'll still find her parked in the hallway staring under the closet doors--sniffing and pawing. And she thought her life had become safe and serene since Miss Gracie disappeared....ROFL!!!
Posted by Rita at 2:01 PM