Okay--first I have to show you what I painted with watercolors--coffee filters. You can hand baste around the edges and pull them into a big puff ball that can be flattened and used as a flower. Saw it on TV and didn't realize how huge the flowers would end up--chuckle! You know how I like to work small! So--I cut the coffee filters down after they were painted and made smaller flowers. I discovered that I had really wanted to do this because of the painting and, after I made a few, I wasn't sure if I would like the little flowers on cards or not? I never finished very many of them. I think I just might come up with some other use for these colorful round papers...hummm???? 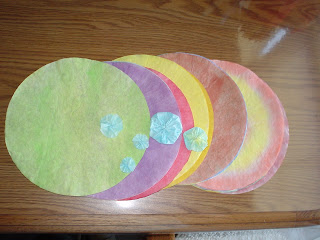 The painting was really fun, tho. I had them laying all over--drying on paper towels on top of newspapers. This was long before the days of the plastic cover on my table and even pre-Karma maybe, as recall. 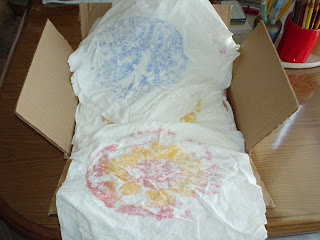 I had never wasted so many paper towels--felt guilty--already had it in my mind about recycling and making paper--so I saved them in a small box. 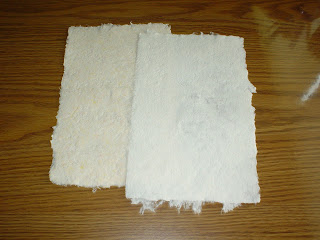 These are the two sheets I made from paper towels yesterday. Now that they are dry, I will have to see if I can try to paint an orchid on them with ink? They are too floppy and soft to use for actual cardstock, but they sure are interesting. If they do work, maybe I could mount this limp paper onto some cardstock?
Anyways, I can probably use the paper towels instead of the cotton linter, too--as an additive to soften the paper--or for the paper moulds. Oh--I haven't shown you those yet. Maybe tomorrow. I still have a stack we made back then that I haven't put on paper yet. The paper I made a year or so ago was just too thin to support them. I plan on using some of them on the bookcards this time--if I can figure out how to attach them without ruining the handmade paper. I'll show you the moulds tomorrow.
Leah popped in quickly to drop off some milk and eggs for me yesterday. She said that she and Dagan will come by tonight for dinner--and she was making the meal and bringing it over! (Good thing as my kitchen is filled with paper making supplies--hehe!) Hurray! I can hardly remember the last time we were all together for an evening. :)
I had watched this Netflix movie yesterday that just cracked me up (granted--in a sick, sad way), so I sent it home with Leah. They didn't get a chance to watch it so she is bringing it back tonight and I get to watch it again! I am chuckling already! It is an independent film called Live Free or Die:
Bad-boy wannabe John "Rugged" Rudgate (Aaron Stanford) fancies himself a criminal mastermind, although his exploits amount to little more than counterfeiting rebate coupons. After he hooks up with childhood chum Jeff (Paul Schneider) and his sister (Zooey Deschanel), the trio launches an ill-conceived heist that's all but guaranteed to fail in this droll indie comedy. Michael Rapaport, Kevin Dunn and Judah Friedlander provide first-rate support.
I don't think the descriptions are always written by somebody who has actually watched the movie. Jeff's sister had nothing whatsoever to do with what "Rugged" and Jeff were up to. Duh! The acting was great. These two guys were really strange fellows--funny by character alone, if you know what I mean. The storyline was something else--had some surprises!
Anyways, back to papermaking. The other sheet I made yesterday--I was trying to recycle the drawing journal from India (that I disliked so much because of the uneven pages and it was so scratchy and bumpy for my fine pens). 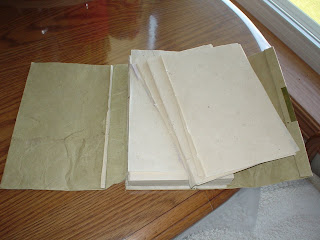 Well, it didn't even make decent recycled paper! I will try recycling this sheet again and adding some plain white cardstock or packing paper or even the used paper towels--something to attempt to even it out. It is no good as it is. It is slick and shinier and stiff, too. 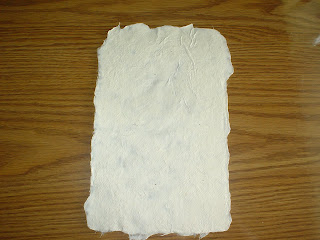 That's the thing--if you don't like how the paper turns out, you can throw it back in the blender--hehe!
Well, another hot and humid day in Fargo. We had a thunderstorm roll through, but it didn't help with the humidity as far as I can tell. The porch carpet is soaked, but Karma wanted to go out anyways. She goes back under the chairs where it is still dry and sprawls out. Cats! Chuckle!
Well, really looking forward to seeing Dagan and Leah later. I want to find out what is happening with the house, Leah's new job, Dagan's job (they were moving an office?), and Leah's poor battered body. Leah says she is getting better--but she had headaches and was having trouble sleeping for a while. Could only sit for so long and she'd get a headache--pain in shoulders and neck (whiplash, obviously). She said she was living kind of like me--could only do so much at a time and had to take a break and go lay her head down and rest her neck--pain waking her up off and on all night. I hope she's feeling a lot better by now? After all--I know how it sucks to be me--hehe! More tomorrow....
Posted by Rita at 1:36 PM