Leah emailed me a great picture of her and Dagan! 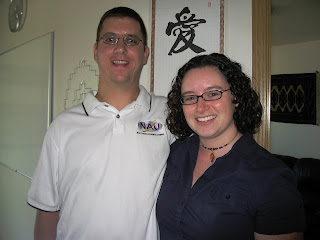 I tell you--I just love them to pieces!! :) :) :)
And I heard good news! The loan guy at their bank figured out another way that they could work out the loan for the house!! And now it looks like they might be able to do it after all--tada!! I hope it all works out for them. Dagan told me that if all goes well they should be breaking ground by September--so we'll see. They'd have to start soon--get the foundation dug out and the building framed--because snow and ice are waiting around the corner--hehe!
I was finally feeling better this morning. I put on the second coat (or was it the third?) of white acrylic paint on the ice cream pails. My days and night have been flipped for a few days. I only had a nap today, so I am hoping to get back to a more normal schedule here pretty soon. :) 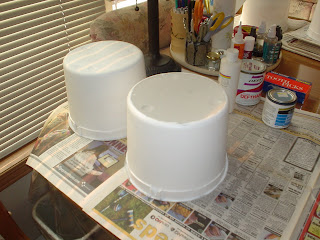 I found a small can of country blue acrylic paint in with all the paint supplies that came back from Dagan and Leah's. Used it years ago to paint the wooden stool I found in the dirt floor cellar at the farm. Amazingly, it was fine--that was around 17 years ago! I decided to just paint them all blue. Added some white to the can so that I, hopefully, have enough paint for all four pails. The color will be a lighter blue, but that's fine. I hadn't been sure what color or colors to paint them in the first place. The two that will be going around the plants outside on the porch have the bottoms painted, too--and I will have to put a layer of polyurethane on those.
I have been forced into being "good" and sticking to just the usual daily activities for the past several days. Finally am feeling better, but am taking it a little slower. Just wanted to start out with something simple and yet I get to at least have a paintbrush in my hand--hehe! Testing the waters, so to speak. If I don't have a flare again, then I shall get back to organizing the bookcases. :)

I watched some movies, of course. If you like very dark, sick humor, I watched a movie with a lot of twists and turns in it. Kind of reminded me of that old movie The Ladykillers--Tom Hanks made a remake of it that was pretty good. Only this one was faster moving and a little darker--but funny--to me, anyways. Called Big Nothing:

Strapped for cash after being fired from his new job at a call center, former teacher Charlie (David Schwimmer) teams with a low-level crook and his girlfriend in a scheme to blackmail the Rev. Smalls, an easy target known to visit adult Web sites. But their simple plan quickly falls apart when Smalls dies. Now, Charlie's got way more trouble on his hands than he ever expected in this crime caper co-starring Simon Pegg.

I also watched a movie about a mail order bride coming to Minnesota in the early 1900s called Sweet Land:

In Ali Selim's Independent Spirit Award-winning tale of how love triumphs over ignorance, German immigrant Inge tells her life story to her grandson after burying her husband on their farm in Minnesota in 1968. Inge begins her tale in 1920, when she's just become a mail-order bride to Norwegian-American farmer Olaf. Discovering that Inge's heritage is actually German, both Olaf and the community struggle to overcome years of anti-German propaganda and prejudice.

I was fascinated by this movie, of course, being from a Swedish immigrant background. Yes--even though my (formerly) married name is McGregor, I am a 100% Swedish "Johnson" girl from Minnesota. My grandfather worked his way over to Canada on a ship and became a lumberjack up there before he moved down to Minnesota. Does that make me second generation or third? I think if you go back--within a couple more generations everybody had come over from Sweden, but I am not positive? My sister has been studying the family tree the past few years--she knows. I'll be interested to see a copy of the information one day. All I know is my brother, sister, and I were the last of the full-blooded Swedes in our immediate family--and I am sometimes accused of having a Swedish accent--chuckle!

It has been cooler at night lately--makes it feel like it's fall already? Was a dark, cloudy day today. Not very hot--but still humid--have had the apartment open. And that's the news from Fargo for today--chuckle!
You betcha! :)
Posted by Rita at 4:32 PM