Here are the ceramic paper moulds. 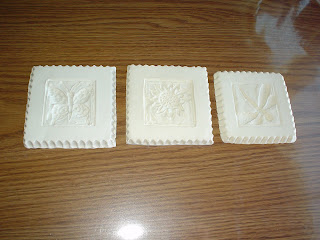 These are made using only white cotton linter paper that is finger pressed into the mould. We tried making one of the dragonflies without using the solid white linter paper, but it just made the imprint a little harder to see, we thought. (Middle left hand side.) 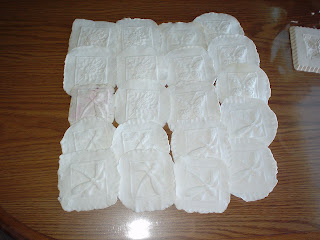 We didn't have the TV on, so missed all the coverage of the bridge collapsing in Minneapolis until a friend from work called Dagan later in the evening. Was still on every local channel up here in the FM (Fargo Moorhead) area. I think the thing that has people so upset is that the bridge had been inspected and that it collapsed for no apparent reason with less than capacity traffic (half the lanes were closed off for surface repairs that had nothing to do with the collapse, they said). It is surprising that more people weren't killed, actually. Horrible thing to happen!

Dagan and Leah were waiting for a call from the contractors last night. They never called. They were supposed to deliver the contract for them to look over? Sounds like things are shifting with the contractors. First they were going to carry the loan and now they want Dagan and Leah to. I know nothing about the process of house building, so it is all Greek to me, as they say. Today Dagan and Leah have an appointment with the loan official at their bank to ask questions about what is normally done by contractors. Depending on what they hear today--the deal may be off between them? They were disappointed that they didn't even follow through with calling and delivering the papers last night. Not a good sign. Hummm? Not sure what will happen. This has been taking a lot longer to even get off the ground than they expected, too. ???

Leah only has a couple of smaller bruises from the accident--which is just downright amazing! They are looking better and going away. Her headaches are less and less. She is doing pretty well and is working at getting the computer hooked up between home and FoxRX. She has a lot left to do with that part--could be busy with that process for another week or two. So, it could be a while before she actually can come over for a day for crafts. Plus--she might get in some extra hours at Valley Video, too--to pay for the Internet phone she needs. (My guess is September.)

Dagan's offices have moved! He is not right across the highway from me anymore. Moved up by Main Street and 45th--about 10 more minutes driving time for him. No more popping over for lunch, I guess. But--he has a window by him now! Nice! They are busy reorganizing in the new building. He still really likes his job.

So--got filled in. Was nice to see them both! I hope to hear about the house decision soon, too. Right now--I am off to sit on the porch and read! Have had a break in the weather since last night--all the windows open--just beautiful out! :)
Posted by Rita at 2:55 PM