Here's Caroline! Haven't had a picture of her for a long time. Funny--she said the last picture I took was probably with her vacuuming. Better than cleaning the toilet, I replied--ROFL!! She is such a great young lady! 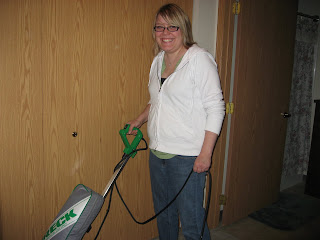 Funny--I seldom take pictures of people because I don't want to be intrusive, you know? Leah and I hate to have our pictures taken--period. And I don't see many people in the first place--ROFL!!
Miss Karma--basically she doesn't mind too much--and she is at my mercy--hehe!
I couldn't find her last night for a while. She was sleeping on a chair under the table--out like a light. All that fresh air she has been getting I guess, eh? :) 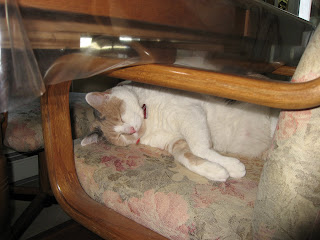 Well, plans have shifted, as they so often do. :) Leah's mother has been waiting to move. The government recently bought her house (and several other people's--before the floods) because she was in an area they plan to flood--wrong side of a dike they have been planning to build for many years.


She has a house picked out--small town about 45 minutes away from Moorhead, I think?--but had been waiting on actually getting paid for her house. Not sure if she finally did or she just has to close on the new house, but she is getting ready to move--closing on the 29th.


So--Leah is busy with helping her mom and I probably won't see her for a couple of weeks. I sure hope everything goes well and it is an easy move. :):)

Yesterday I washed clothes after Caroline left. Was in bed early and up early. Nice! Sun is shining now-but we're supposed to have rain moving thru again today like we did yesterday. In the 70's tho!! Hope it is nice where you are and you have a great day!! :):)
Posted by Rita at 7:01 AM