This is more the typical rental moving trucks we see here--hehe! The family across the hall from me moved out yesterday. Beautiful day for it! 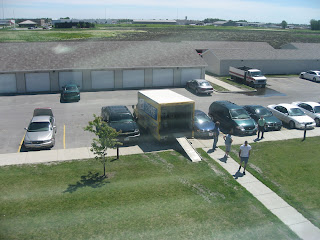 The car started--no problem! Hurray! And off to the dentist I went.
What a shock! But a GOOD shock! :):)
I was prepared for the worst news since I hadn't been in for at least five years (since I lost coverage)--my teeth have been sensitive to cold--when I accidentally bit down on something hard while I was chewing I about went thru the roof here last month (hurt for about a week)--and, let's face it, I can't even tell until something is really, really bad, right? All they could find were two cavities in my molars!! TaDa! I was truly shocked!
Come to find out--you can "bruise" a tooth by banging it or hitting it on something hard, etc. I'd never heard of that. And--they asked me if I have sinus trouble. Yes! Chronic sinus. That can actually make your teeth hurt sometimes. I'd never heard of that, either. So all the soreness in my mouth and jaw is probably a combination of fibro, chronic sinus, and the arthritis in my jaw. Great news! I was afraid they were going to pull several of my teeth out! :)
Oh--and my teeth are more sensitive because I am getting older and my gums are receding. How pleasant, eh? They warned me to really be regular about flossing because of that. It sounded like I could be on the cusp of getting gum disease. I haven't been good about flossing so I will have to change that. I go in on the 17th to have my teeth cleaned--and the young lady said she didn't think it was going to be that bad, even after five years. Good! My brushing 2-3 times a day is a good thing, I guess--hehe! At least I did something right.
What a relief!! :):)
I did tell them that I have to rely on them to tell me because, obviously, I can't tell until something is really bad. They also do rely on patients telling them what hurts, tho. So--they said if I ever do have a pain that doesn't go away in a week or so--to call and make an appointment because I do have capped teeth for my permanent bridge and not everything shows up readily in an xray. But in all the poking and prodding and picking they did--nothing sent me thru the roof--hehe! :):)
Anyways--when I go in for the teeth cleaning, then we'll schedule for the fillings. TaDa!!
I was corralled outside of the Family Health Care Center by people wanting you to write a few sentences to Senator Conrad (ND) about needing public health care and not to tax our heath care benefits. I wrote about when they talk about health care they should also include dentists and eye doctors.
Was home in plenty of time before Caroline came to clean. She told me that she had a mysterious pain in a tooth and they couldn't find anything. Her dentist sent her to a specialist. The specialist told her it was from her having a sinus infection! See how it is? Every time you have something new happen then suddenly when you tell somebody else about it either they have had it or know somebody else who has--hehe! That's what happened to me when I found out I had fibro. I had never heard of fibromyalgia--and suddenly I met people right and left who either had it or knew somebody who did. Strange, isn't it? But Caroline verified that you can have tooth pain from bad sinuses! Felt good to hear it from somebody else. :)
After Caroline left I kept hearing this little motor going back and forth outside. Believe it or not--this little boy has a motorized tiny cycle!! He was going back and forth over this ramp across the sidewalk. 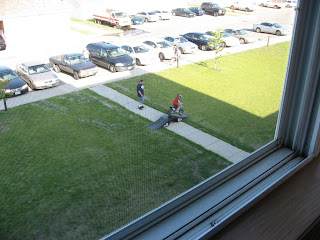 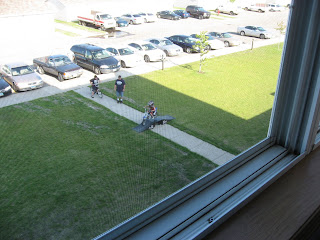 Another thing I never thought I'd see in low income housing! Yup! Times they are a changing! ROFL!

I was just exhausted last night. (Doesn't take much to wear me out.) Was in bed at 8pm. But I woke up at 1:30am and couldn't get back to sleep--so I got up and watched some stuff on tape.

Karma parked herself by the open window in the pre-dawn--her favorite spying time. I don't know what she finds so fascinating out there? Swallows waking up for the day? People leaving for work? Are there rabbits in the field in the early morning? 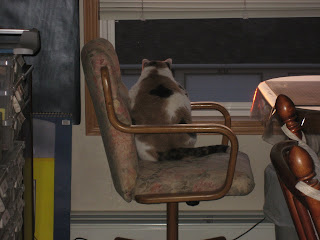 She stayed there until the sun was out. Annoyed that I interrupted her (should have used the zoom again)... 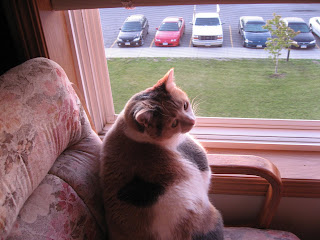 ...she did something I rarely see her do. She climbed onto the window sill.
But she proceeded to push her head against the screen! And really head-butted it! 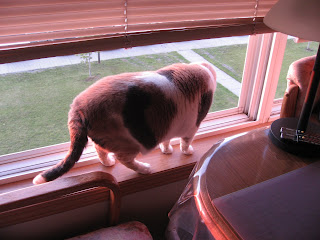 Scared me to death! I grabbed her and told her no! Good Lord! In this place--the screen could pop right out and down she'd go!
So--even tho it was nice out I closed those living room windows when I went to lay back down this morning. And I'll keep an eye on her. That is the reason I keep the chairs right up next to the windows there by the table when I am not using them--so that Miss Karma will sit in the chairs and not in the window sills.
When I first moved here I heard about a cat who did that very thing--popped out the screen and fell out the window while they were at work. It was on second floor and they assumed the cat survived because there was no dead cat body--but it ran off and was never seen again.
I hope that screen pushing idea is out of her head. I think she was trying to get a better look at the swallows landing in the balconies below us. Shudder! She can do that on the porch because that screen has give to it.
I rarely have ever left the windows open there by the table when I am gone or asleep because of not wanting things I usually have on the craft table to be rained upon and ruined. I guess I'd better stick to that practice, right? Another gorgeous day today!! These past few days have been a glorious break from the heat and humidity! Another read on the porch day--in July!?? Wow!
Have a great day! What's left of it--hehe!
Posted by Rita at 12:03 PM