Well, I think I discovered why I can't seem to regulate the heat in here. I walked down to put something in the mail slot late last night and it was extra cold in the hallways.
****
Okay--confession number one--I have not taken the stairs for a long time. Been so chilly in the hallways that I just want to get back home ASAP. I know I really should be doing that for exercise, so I decided to walk the length on the first floor and come up the stairs near my end of the building--which is my usual route for the stair climbing.
****
Well--it was not just chilly down that hallway--it was freezing!!! As I turned into the door to go to the stairs I thought I saw the outside door at the far end of the building (two doors at that entrance) was stuck open because of snow caught in the door! But there was an even colder breeze where I was standing because the exit door next to the bottom of the stairs that leads directly to the great white out-of-doors was most definitely and without a doubt stuck open several inches because of snow buildup!!!
****
I held open that exit door (surprised my hand didn't stick to the metal door!) and kicked and shoved with my feet--getting snow on my bare legs--until, after several tries at slamming (it's an exit only door with just a push bar so you have to open it wide and let it slam), I finally got the door to close all the way. But--confession number two--I was so frigging cold I was shivering by that time so I didn't go and work on the other outside door. I know--my bad.
****
I am going to check it this morning. And I plan to call the office and let them know. They might already know. I think this has been happening for quite a while. I have had cold air coming in from the hallway to the point I have rolled up a rug and put it along the bottom of the door. (Karma would have none of it, Iggy--hehe!) But that doesn't do much good, because my door leaks air top, side, and bottom. This probably explains why I have the heat cranked up just to try to get the chill out of the air and next thing I am roasting--somebody probably got the doors shut down there!
****
How do the people on first floor stand it!!! I have it the warmest up here on third floor. They must be sooooo cold down there!?! Why don't they go out and get those doors shut? I just don't understand. ??? If we put the heating system out altogether because it is getting overworked--what then! My God! Last night we had 40-50 below wind chills!! It was minus 25 degrees! People! Make sure the doors shut after you! Duh!
****
But then I didn't go back down. Even if kicking away all that snow was hard on me--I should have gone back down later and not just crawled into bed to warm up. So I am just as guilty, I guess. who am I to talk, right?
****
But--now that I am aware of it--I am going to call the office. And I will dress a lot warmer to check my mail--and I will take the stairs and at least check the exit doors on my end of the building. Brrrrr!!!
****
Meanwhile--on a lighter note--I have been puttering with the caulking and having a grand time. :) 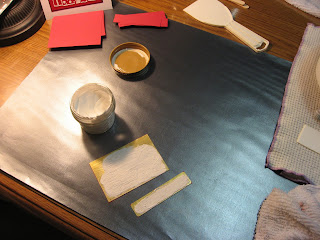 Here you can see how I smear the caulking with my finger and press it into the stencils. 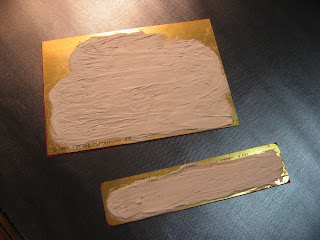 Then you peel them apart and hope fo rthe best--hehe! Most of them turn out fine. I have a little stack that is slowly growing. :) 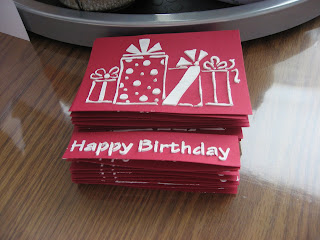 Before we put the cards together we can pick off most of the little white pieces that end on on the outside edges of the red cardstock. I do love the 3D effect this makes. So cool to run your fingers over. :)
****
While the snowstorm was going on, Miss Karma wanted out. The snow did stick to her feet.. 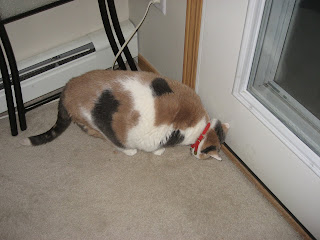 ...so she got to eat her footprints--hehe! 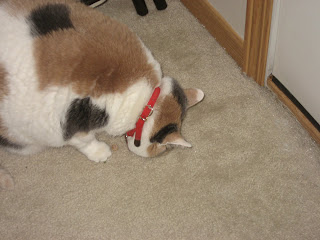 But it was sooo cold then that she hasn't asked again for a couple of days! ROFL! Good thing! It is much colder now and she is not stepping foot outside! I won't allow it. It was still 17 below at 9am! She's staying inside--at least until it gets closer to zero--hehe!
****
I also quickly made a few simple thank you cards. I am way behind with those from Christmas! 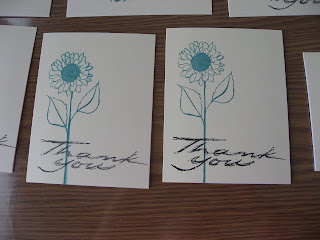 So those will finally be going out today. :) 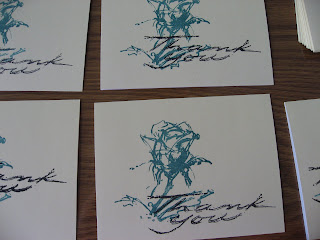 Which means--I need to dress warmly and head downstairs with them for the mail. Wonder what I'll find??
Posted by Rita at 9:00 AM

Cold, cold, cold - it is cold everywhere! Your chalkings are great.

Our chihuahua doesn't like getting his feet wet either. He's such a wuss. lol.

When you call the office you should suggest to the management that they keep those areas in front of the doors well salted, to melt the ice and snow and keep the area clear so that the doors stay clear by themselves, since the already proven unrespecting residents there do not care enough to close them there(not including you of course, and I'm sure there are a few others like you who care, but the general population does not seem to). By spreading a bunch of "No Ice"/salt there fairly often the doors should stay clear on their own.

Here at work, there's tons of salt everywhere outside the doors, and we don't have any ice or snow buildup issues, granted they take better care of things here too, but anyway, that should help a lot!

It's a good thing you noticed those doors. Seems the building maintenance isn't keeping with it, which surprises me. With the chance of someone falling and a possible lawsuit following, you would think they would keep the doorways accessible and clear of snow and ice.

Your cards are so cool. You do a great job. (i think i've told you that a few times...lol)

I hope the weather gets a little less cold out there soon. I was gonna say warmer...but warmer? *shivers at those temps*

Hi Deanna!
Karma is disappointed when she can't drag snow in on her feet so she can eat her footprints--but she is not crazy about rain.

We had chihuahuas when I was young and they hated to go outside to do their business in the snow. If you didn't watch them they'd never leave the back step! hehe!

Hi Leah--wait till you hear what they said. I'll write about it on the blog tomorrow--hehe! ;)

Hi AliceKay!
I can't believe the general attitude, either. Wait till you hear tomorrow!

I was thinking the same thing re. salting the entrances. Is the building heated inside? If so, the heating furnaces would be working overtime to compensate for all the cold coming in through those open doors.

The caulking looks SO cool!!! And I like your quick Thank You cards too! You've been quite busy ~

Serena--you may have already read Saturdays--but whew! What I thought was going to be just a heads up quick conversation turned into almost a polite debate! When they are blaming residents and not wanting to deal with things--just costs them more to heat the place, etc. Duh! I think the staff we have right now is totally burnt out and fed up. Can't really blame them on a LOT of issues--but this one is not one to fight over, in my book.

Thanks--love puttering with my cards. Where I can see people leaving by the emergency exit--ROFL!!! (I have used it too.)

Hmm... Karma needs to get a little "cat-sized" snow shovel and bucket set so she can bring in some snow to nibble on.

Iggy--you gave me the idea to bring in a handfull for her--hehe! ;)