Karma and I did our morning stretches. 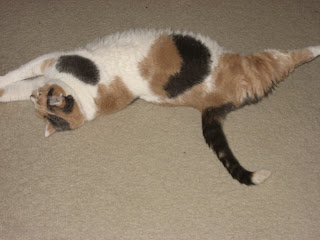 Last night was supposed to be -22 with a little less wind so only 30-40 below wind chills. Actually predicted to get above zero (5) today. But it is still 18 below, so I'll believe it when I feel it--hehe!
****
Okay--yesterday--I brought mail down and took the camera with. There's a stairwell next to the mail boxes with an exit only door. It was open and not latched, so I kicked away snow until it latched... 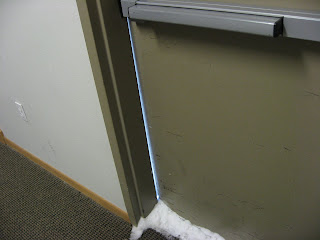 ...but you could still see daylight (which is not unusual here). 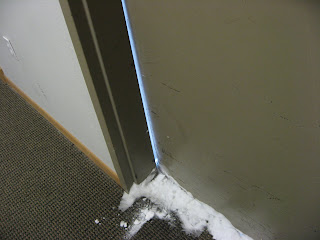 Dropped the mail in the slot and walked down the hallway on first floor. Could tell the doors were shut because it was back to just chilly and not freezing. Here's the double doors at the far entrance. Door looked pretty much closed now. 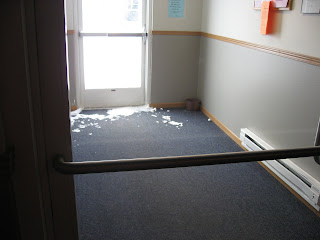 Here's the other exit only door at the end of the stairwell next to my apartment. Can see daylight. 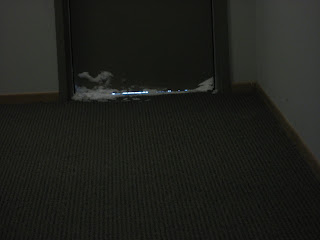 Wasn't propped open a few inches like before, but still...wasn't latched. 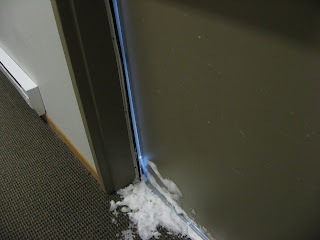 So I kicked away again...and again... 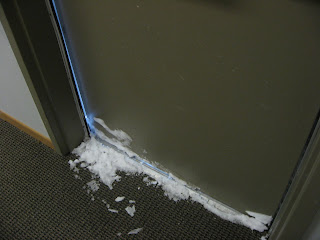 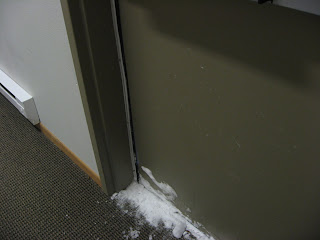 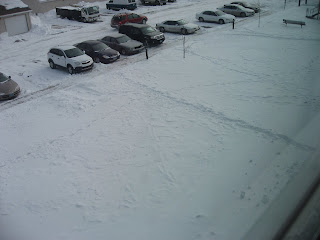 Are you as tired as I am just listening to that? ROFL! I had no idea it was going to be such an ordeal. Whew! I don't blame them for being defensive and fed up with the residents, tho. But not all of us are a problem or disrespectful or ungrateful for being here.
****
I feel badly for the people who work here. I just stay in my apartment and only go in and out of the building on occasion--and check my mail five days a week. I try my best to ignore the state of the elevator and the hallways--and some of the occasional hostile looks from other residents. [Sad to say, but some of them just seem to dislike Americans for some reason? Either that or overweight Americans?--hehe!] But there are still friendly nice people here, too. I love my apartment and I am grateful to be here! It is my sanctuary and I am happy here. the end. :)
****
Anyways, late last night I buzzed in the UPS man. The "tear bar" came from Daniel Smith! 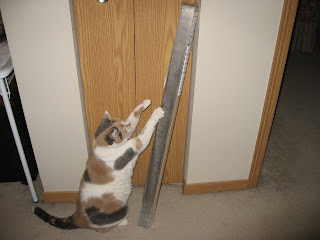 It was waaaay too cold to touch for a while--brrr! Altho, Miss Karma wanted to--hehe! She looks like she is paying homage to the frozen wonder, eh? They had used that saran wrappy stuff to tie it to a long, thick cardboard roll. Smart!
****
It is awesome! 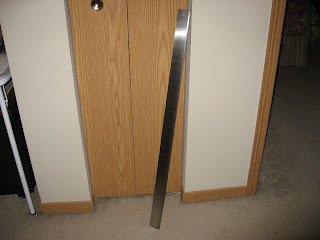 I know it may not look like much, but it is nice and heavy--straight and smooth! 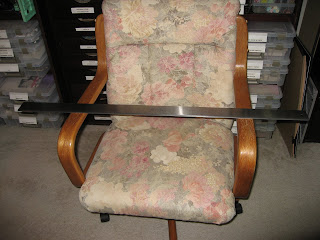 I think this will work so well that I will be able to tear a bit of paper myself, Leah. ;) The weight of it might mean I wouldn't have to use my left hand as much as I would with a lighter ruler or bar. We'll see. Excited to try it!
****
It was sooo cold yesterday--and it was the last day for one of my gas coupons. Well, there was no way was I going out in that if I didn't have to. Sorry. Just wasn't worth a couple of dollars to me--hehe! I think I may wait until I have to go to the Federal Housing appointment if it doesn't warm up. It's not like I don't have about a half a tank. Just like to keep it pretty full when it gets this cold out. Pita started when Leah checked her, tho. I really should double check before my appointment on Wednesday, tho. Brrrr! I'm praying for zero! Above zero--hehe!
****
Goodness sakes! I had to take breaks, took a phone call, and it is after going on 10:30am! And still minus 17 degrees. Zero may be a dream.
****
If you made it all the way to the end of this--I admire your patience. ;) And have a super-dooper day! :):)
Posted by Rita at 6:29 AM

I made it to the end. LOL

Wow, what a time you had trying to tell the people about those doors. It doesn't make any sense to me that they don't keep them cleared...whether they're exit doors only or not. (i work with idiots on a daily basis so some of this makes sense to me....lol)

The tear bar looks like it will do the job nicely. Karma was sure interested in checking it out.

Brrr....your temps make me colder than I already am. *hugs*

My goodness, Alice! I think maybe you deserve a medal or something--ROFL!

I do know what you mean. I have had so many encounters with people like that and have worked with some myself. Rules are rules--red tape is red tape--hoops are hoops--to heck with common sense or logic, right? You may as well laugh because there's nothing else you can do--hehe!

Karma wanted to touch that tear bar--but it was so cold she couldn't keep her paws on it. LOL Ahhh! She makes me laugh every day. :)

You have no idea how much this snow/sidewalk issue frustrates me!!! First of all, when I come over on Monday, I'll start PitaPaseo for you and make sure she starts for you... BTW, seems odd to call an inatimate object a male or female... Anyway, that way you don't have to and I'll make sure that your garage is shovelled too.

I also plan to take some pictures for you, when I'm out and about, of large piles of snow, and of the severe lack of safety, because I have a small plan, because I think this snow situation is rediculous! So, I want to talk to them, face to face, I should be able to get there before 5pm on Monday, talk to them face to face about out concerns. So what if the fire marshal says that they don't have to, which I find very hard to believe, more on that later. See if they will do anything about it.

If they don't see the reason that even if they claim it's an emergency exit door, if there's an emergency/fire, no one will be able to get out. If it is a true emergency exit door ONLY then it needs to have an alarm on it or everyone will use it regardless. BTW, there is no posting on the door that says emergency exit only, at least not before the last time I was there, and not for the last how many years you have lived there.

If they won't do anything about it, I want to call the fire department and see what they say, because I can't believe that they would tell them that they don't have to clear the emergency exit so that people can actuall leave the building if there's an emergency/fire. *sigh* This really agrivates me! It's not the resident's fault, there have been times where I haven't been able to close the door because it's iced over and unless I went and got my ice scraper and picked and stabbed at the ice in the door jam there was no way I could get that door closed. Furthermore, I only regularily see salt at the front door, not the side double door, and NEVER at the exit door.

I realize now, I probably should have just emailed all of this, it got really long...

Hi Leah!
They claim that the fire marshal says they are only required to shovel by the door so the door can open and they don't have to clear the sidewalk. I think that is weird and unsafe, too.

I did see a printed sheet on the exit door by the mailboxes once quite a while back that said--emergency exit only--but it was gone in no time. I'm sure people take them down.

Thanks in advance for shoveling and starting Pita up. ;) We'll talk more on Monday. LY

I made it to the end too. In my view, it has nothing to do with whether or not residents should or should not be using the Emergency Exits. It doesn't make sense to me because surely fire safety regulations would stipulate that all residents should be able to make a safe and fast exit in case of emergency at all times...and that doesn't mean just the immediate area around the doorway. People in wheelchairs are definitely at risk by the sounds of things and it sure sounds like they are in breach of regulations to me. All exits from that building should be their responsibility, not the tenants. I feel the same as Leah...maybe they are just trying to pull the wool over your eyes? It's ludicrous!

Now, the tear bar looks great but I'd like to know a little more about it's use if you could spare some time in a post, Rita. Is it used, for instance, to get those frayed torn-looking edges on watercolour paper???

I think a couple things would help that "emergency use only" door - one is as leah says, an ALARM should go off when the door opens. Secondly, it should be locked on the outside (its an exit - not an entrance).

Give 'em heck you two, Rita and Leah! Some folks sleep better knowing you're safe.

I think Karma really was paying her respects - LOL - thats quite a pose!

Hi Serena,
You already know that they finally shoveled! Hurray! ;)

Yes--the tear bar is used to get that soft straight edge like on watercolor paper--or on any paper, I guess.

This is where I saw somebody using it: http://www.youtube.com/soulcomfort1#p/f/6/1z6qmXGRrsE
We'll be using it to tear journal pages from the big 22 X 32 inch drawing/watercolor sheets. Looks awesome! Heavy enough that I might be able to use it myself. (I can't press, grip, pull, or push, or lift with much strength or for any length of time with my left hand/arm.) Leah and I also would like to eventually get the regular small deckle rulers for a more ragged edge, too. I'll show pictures, of course, when we get to making pournals. ;)

Hi Iggy,
I agree--if they don't want anyone to use those doors they should put an alarm on them--hehe! the doors shut and you can't open them. No door handles. Can't enter--only exit. Unless they are stuck open, of course. Well, if they keep the sidewalk shoveled from now on, we won't ever find out what the laws are in ND about the sidewalk--hehe! I hope we don't have to worry about it again. :) Leah did give'em heck, didn't she? I'm so proud of her.

That was such a cool pose I caught Karma in. Almost looks like she's bowing to the tear bar--hehe! ;)