Big thrill for Miss K. I scooped up a bit of snow and put it on the carpet. 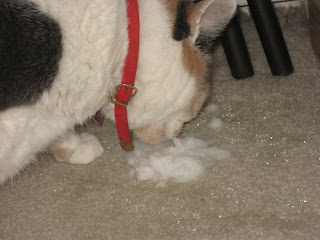 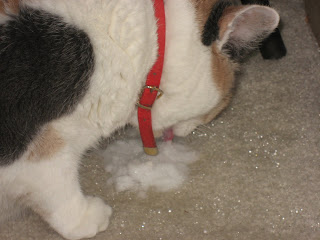 When Leah came over yesterday (after a job interview--day off) she went right to the office to complain about the sidewalk not being shoveled. The office girls gave her the same song and dance, so she asked for the manager. He repeated all the same stuff--complaining that the residents had ruined a door in the other building that cost him hundreds of dollars to replace....on and on. Was not going to shovel. Said that the doors were so close together that people could use the other door in case of an emergency/fire alarm. Nothing Leah said seemed to knock any sense into him, either. Even tho she brought up that the doors on that particular end of the building are NOT right next to each other--at all.
****
She was still hopping mad when she got to my place. We were appalled! They expected people to use the door at the end of the building!? You'd have to come down the stairs and, instead of using the exit door right in front of you, turn around, open the hallway fire door, go back into the burning building, making your way down to the far end of the possibly smoke filled or burning hallway to get out? Ridiculous!
****
Leah left the office and took her camera and went all over outside taking pictures--hoping that they were watching and wondering what she was doing that for. We had discussed getting ahold of the firemarshal as the next step.
****
Here's the fire door/emergency door/exit door at the end of the stairwell on my far end of the building. 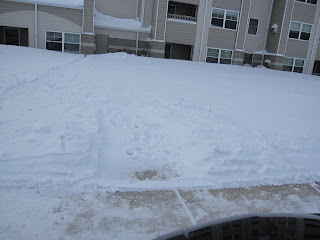 They have just shoveled enough so that you can open the door, as they claim is all they are required to do. 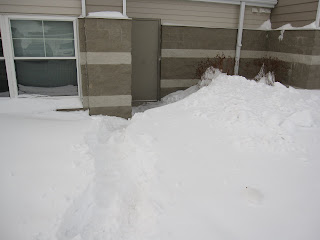 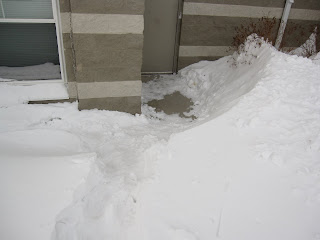 This is what Karma and I would have to go over--Karma in her stroller--the next time the fire alarm goes off. Once the door shuts you cannot get back in. No handle. 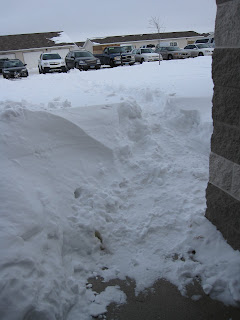 Why then do they clear by the other two emergency exits?
****
The other two exits are kind of basically right next to each other, as he pointed out--unlike mine. But who in their right mind would ever go back inside a burning building to get to that other door? 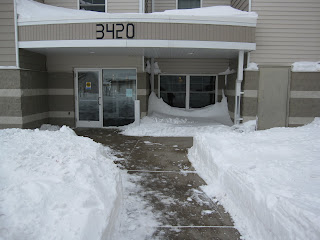 They clear this one by the front door. 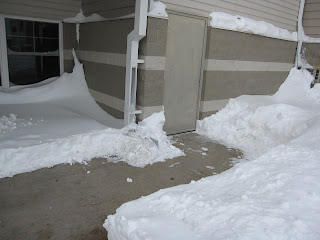 Leah asked him why they didn't just clear right outside the door there if they are no required to do anything further? Why did they bother to clear the sidewalk between the two doors? 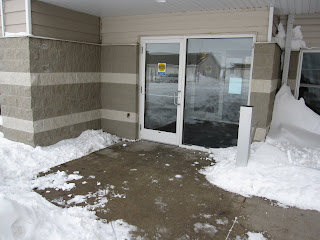 And she even walked down to see what the other far end of the building's exit door looked like. 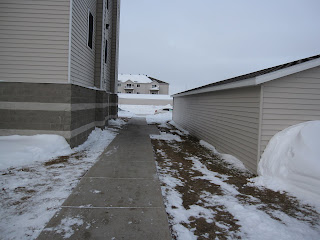 There are right next to each other, also. We don't know what it looks like inside, but I bet there's a wall and door separating them, too. If your building is on fire, you don't exactly want to re-enter the building--duh! That is why the fire doors close automatically all thru the building when the alarm goes off--to contain a fire. You are supposed to leave by the quickest route and that is why the fire doors are all at the end of the stairwells. DUH! 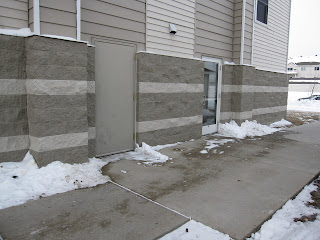 Anyways, we tried to ignore the problem and continue on with our day. Leah gave me all these pictures she took--for the blog--hehe!
****
Our white and cream colored paper flowers came that we got on eBay. All of these packages for $9.99! Most of them would cost $2.50-3.00 each. Awesome. Saw some techniques for coloring them on youtube. 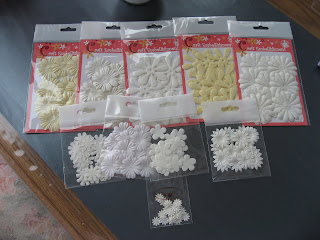 We worked on Iggy's cards. Got out the new ScorPal. (I did make a quick video about the ScorPal, but I haven't uploaded it yet.) 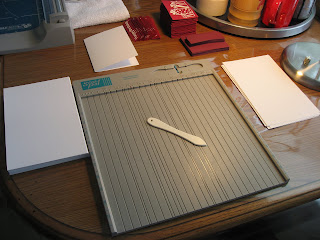 Then we worked at adding the carpet tape to all the backs on both layers. 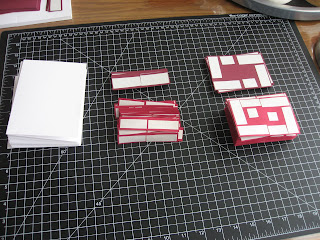 Leah left to meet with another temp agency and I kept working on the cards while she was gone. She came back and we finished Iggy's cards--tada! I still have the rest of the extra ones to make, but we figured out how to package Iggy's in the mail and Leah took them with her.
****
Honestly, I can't remember what we were doing when Leah noticed...but it was late afternoon...TADA!!!! 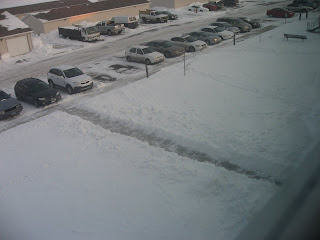 We jumped around in the living room!!! The sidewalk got shoveled! ROFL!
****
Maybe her marching around the property with a camera made them rethink their position? (And the fire marshal could have been the next person to see the pictures--hehe!) Regardless--we were thrilled!!! That was so stupid--and dangerous! They have shoveled that sidewalk every winter in the past five years. Punishing the residents for somebody bending a door out of shape because someone couldn't close it with the snow and ice in the way--regardless of how the snow and ice got there--was a really stupid idea.
****
Happy dance! Happy dance!!
****
Leah is my hero!!! Heroine, I should say. Many people here are grateful to her, even if they don't know it. ;)
****
Mean while--today. Caroline is coming. I have been working on all my paperwork for tomorrow (Fed Housing). Watching the first DVD of Big Love (season 3)--and might work on some more caulking. Sun is out and it is supposed to get into the upper 20s! The snow is softening. :)
****
Have a great day! And may all your emergency exits be clear--hehe! :):)
Posted by Rita at 10:36 AM

That's marvelous! Leah is something!

Psstt.. Karma, if you ask really nice, you can get flavored "water ice"... :) Would you like some tuna flavored?

I'm glad they finally got the sidewalks shoveled and clear of snow. Leah and the mighty camera. :)

Karma is so funny.

YAY for Leah!!! I'm so glad she took those photos which probably got the management nervous because, I don't care what they say, they would have to be in breach of safety regulations with what they've been neglecting to do. Hopefully, you won't need to complain again.

Iggy--yes! That Leah is something! I hope they keep shoveling it now. We'll ne on the lookout, that's for sure. Dagan and Leah leave by that door every time they come over. I think everybody from 2nd and 3rd floor use that door--every healthy person who takes the stairs, anyways. I'm so proud of her and grateful for her to get involved in this mess--and win!! :):):)

A tuna flavored icy--sounds so gross! But I may have to try that next time I open a can of tuna--ROFL!! Yuck!

AliceKay--Yup! Leah is my hero! :):) You never know what people are going to take pictures of these days. ;)

Serena! Yes!! I am soooo happy! Hurray for Leah! I hope they have learned that they better keep it shoveled like they always did before. I noticed they cleaned out the snow from inside the building and the door frames--OR it melted--ROFL!! :)

Here we have an organization called ACCESS Alaska that helps disabled people and that also handle complaints like that. You could have also threatened to wirte a letter to the editor or call the newspaper to do an article on it, or like you said call the Fire Marshall's office. Maybe they thought Leah was a reporter because she was taking photos or filing a lawsuit. Woke them up anyway!!

Akartisan--yes! We would have taken it further. I think they realized that when they saw her out snapping pictures everywhere--hehe! Don't you really wonder what some people are thinking? ;)