Off to Federal Housing yesterday. Was in the upper 20s--so you can see the sidewalks were melting! The streets were melting off a bit. too. Felt like spring!
****
By the time I was done, I was too shot to go get gas for Pita. I've got till the 17th before the next coupon expires--hehe! But I am now under half a tank, so I want to get it filled pretty soon. Whenever. 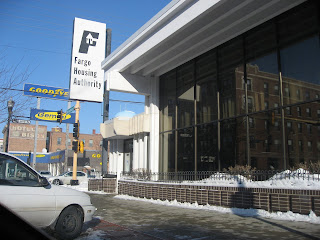 Dagan came over last night, too! I guess he might be coming over after work on Wednesday Craft Nights, too, and staying for a while. Nice! That means I get to see both of them! :)
****
The aquarium finally went out on D&L's big cart last night. 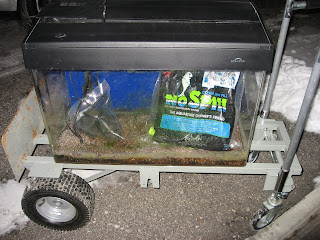 So it is now finally in the garage. Happy about that! 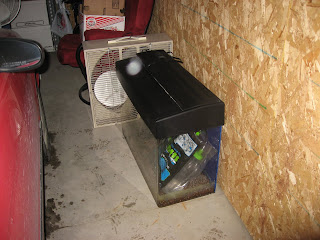 The cabinet went to the trash. Sadly it was ruined (mold!) because of the Eclipse tank. I would never, ever, ever buy one of those aquariums with the pump in the hood ever again. I had problems with it overflowing over the back right off the bat and finally had to use it with no filter at all--for all these years. 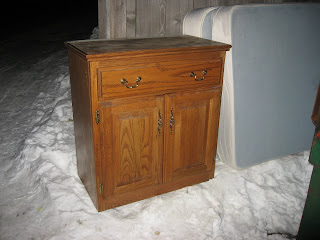 As soon as the filter even began to get dirty--up the water would go and splash over and down the back of the tank. I had no idea what was happening underneath the tank on the top of the cabinet and (warning for the queasy!) under the cabinet on the floor!!! 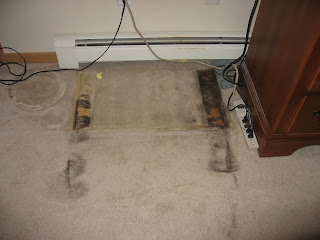 I knew there would be something, but never expected to find all this moldy stuff! Gross!!
****
We are hoping to borrow a handheld carpet steam cleaner or I'll have to rent something. But for now, covered it with newspaper so Karma doesn't lay on it! 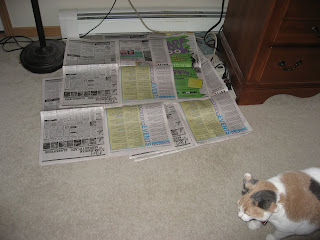 Dagan cleaned off the front spots with Shaklee and they came right up (shock!). See--you can't hardly see anything beyond the newspapers. So we'll try Shaklee in the steam cleaner.
****
I was annoyed enough with that tank. *sigh* Sometimes the new mouse trap idea is a disaster, I guess, eh? Sounded like a new sleek idea--but maybe pumps don't belong inside aquarium hoods. Not from my experience, anyways.
****
Anyways, Dagan went home, Leah worked on caulking the leftover card parts... 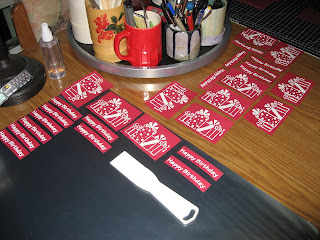 ...and I was adding the carpet tape. 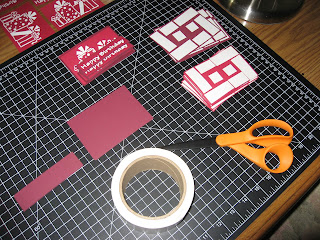 Leah finished the caulking--tada! So now I can putter with putting the parts all together before next Craft Night. :)
****
This afternoon I have the Federal Housing inspector, Bob, coming for my yearly visit. He's the nicest man! And I have phone calls to make to have dentist, oral surgeon, and pharmacy totals for 2009 sent to Deb, my federal housing worker. That kind of day today. :)
****
Supposed to be right around 30 degrees for the next few days--wow! Karma is begging to go out several times a day. The snow is slowly diminishing on the porch. Does feel like spring! Have a great day! :):)
Posted by Rita at 10:43 AM

I take note never to buy that type of tank....what a shock for you to see that mould when you moved the cabinet. I hope it comes up nicely with the carpet cleaner. OH, I was going to suggest to be careful of leaving the newspaper on the carpet for too long as ink can transfer to the carpet. I know that from when I used to use newspaper to pack breakables when we'd move house. I'd have to wash them because of the ink transfer from the newspaper.

How nice that Dagan will be visiting each Wednesday too. The cards are coming along well ~ :)

That reminds me of one of the episodes of "The King of Queens" when they find out they have mold in the basement (and I do not mean Jerry Stiller's Arthur character) and they try to get rid of it - and hilarity ensues.

I hope you don't have any of that sort of hilarity and it just vacuums up and out.

Serena--
I think they must work for some people. They sure sell enough of them. ?? I think it is going to be a lot of work, but I am hoping we can clean the carpet up at least fairly well. Good advice! I can lay on old towel over it.

Iggy,
I may have seen that show. Cost them a whole lot of money in the end, if I remember correctly. I did use the vacuum first--but it looks like there will be a lot of scrubbing involved--hehe! Just have to find the right product or method. :)

I hope the mold comes out of your carpeting without too much trouble. Messes show up when we least expect them sometimes.

I'm glad your meeting went well. Looks like it was a beautiful day in your neighborhood on Wednesday.

Alright, so bad news, my friend with the carpet cleaner, well his wife gave it away because they didn't need/use it anymore. So, we are out of luck there, I am thinking of going over to Cash Wise or something to see what it would be to rent one. Or if that's not a good option, I might just go buy one...We've had uses for them, and actually have use right now with a troublesome area from when Michal and Chuck were living here. I could hand scrub it out, but I don't really want to.

Now on the other subject, Shaklee is awesome! I will NOT allow you to go buy some aweful smelling, chemical ridden, bad for everyone carpet cleaner... Basic H is a good starter but Shaklee's carpet cleaner is great! Workes awesome! It's simply laundry booster mixed with water, got out all sorts of stains in the carpetting in our old place and I can almost guarantee that it will get all of that out. :D Isn't Shaklee awesome?

It has been really beautiful for days! Lovin' it!! :)

Leah--I am game for anything you want to try--hehe! I was surprised at how well that horrible mess cleaned up with just the Basic H and my meager efforts. These dent marks are going to take some work, tho.

Serena just suggested laundry soap and vinegar. We could try vinegar with the Shaklee if it needs more work, too. ;)

As soon as we get the carpet cleaned we can move the bookcase--tada! :)