Okay--today I am going to show some examples of the damage and vandalism that occur here on a regular basis. You will understand more why the staff gets burnt out and defensive.
****
One of the latest things is pulling down the exit signs from the ceiling. They have to be tall, that's for sure. 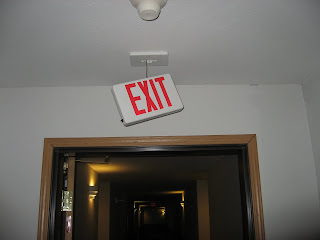 The maintenance man has to reattach it--but then they just pull it down again. He came up with a solution. 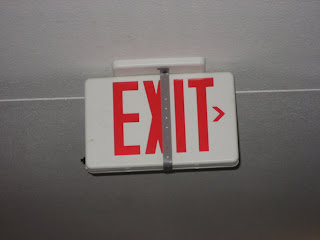 My hips and knees don't do as well on stairs, so I was delighted that we have an elevator here. The past year...well, let's just say you use your key to press the buttons. I'm not sure what all of this is--and not sure I want to know. The wet carpeting in the corner has dried pretty much by the time I took this photo. They have added some kind of fan that goes 24/7 up in the ceiling of the elevator. 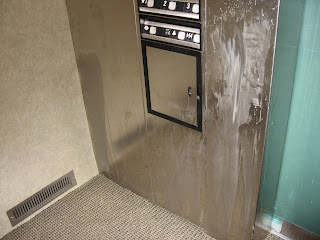 These signs outside the elevator have been wrenched off the wall at least twice. 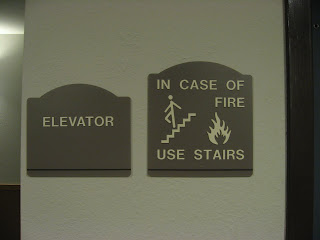 The one in the elevator was ripped off quite a while ago. Nothing was left but a big patch of glue. Somebody plastered a Christmas postcard over it a few days ago. Made me chuckle! Looks better than the glue, anyways. :) There is often spittle dripping down beside the buttons. For some reason that is easily recognizable. 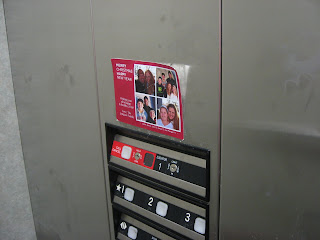 They scratch the elevator door up with their keys. 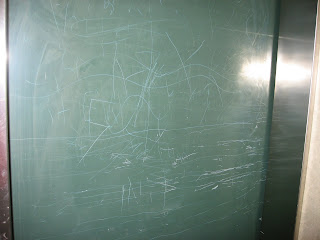 A "new" tree appeared in the lobby a short while ago!? I don't think I have ever seen a complete fake tree in our building since I moved in almost five years ago. I wonder where it came from? The office lobby? Or did someone move out who had "borrowed" it and they decided to return it? Who knows? West Wind mysteries--hehe! 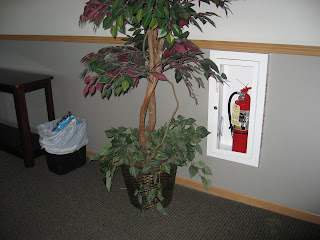 This is what I normally see. They tear off the leaves. This one has even been torn out of the brown basket. 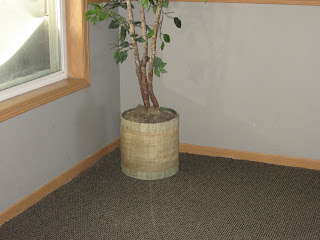 I saw a tree laying sideways at the bottom of the stairwell last week that was torn from the basket and the trunk snapped off at the base. Not sure if this one is that self-same tree repaired, or if they needed two baskets--hehe!
****
Sad, isn't it? But the thing that has always puzzled me is why?
****
Why?
****
I have mentioned this phenomenon a couple of times in the blog. I have lived in low income housing a few times in my life--Dagan and I, when he was little, in Minneapolis suburbs. And I have seen this destruction happen. Over and over again. But here at West Winds it is the worst I've seen.
****
It often makes me shake my head and chuckle, to be honest. At the foolishness of it. The ridiculousness. It's a bit like defecating in your own bed, isn't it? Biting the hand that feeds you?
****
Misplaced anger and frustration.
****
Mostly makes me sad for them.
****
And for those of us who have to live in their wake.
****
Anyways, all of that makes me even more grateful for my little apartment. My sanctuary. My little corner of the world. I am most thankful to be here and do not take having a home for granted.
****
Speaking of--in my peaceful place, I worked on caulking card parts again. Doesn't seem like much progress... 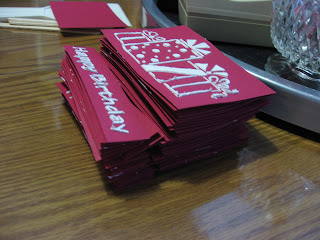 ...but the piles are getting bigger little by little. ;) And I made a video yesterday that shows how I am doing this. It's up on my youtube spot, for those of you who are interested.
****
Also watched the first DVD of The United States of Tara, which I really enjoyed.
Steven Spielberg created this wry cable series that follows Tara (Toni Collette, in an Emmy-nominated role), a wife and mother suffering from a dissociative identity disorder. As she wrestles with multiple personalities, Tara works to keep her dysfunctional family from falling apart. John Corbett co-stars as Tara's husband, who finds ways of coping with his wife's mutability. Keir Gilchrist and Brie Larson play the couple's children.
I don't think I would ever have imagined a sitcom about a married multiple! Fascinating! :)
****
Well--today--for me--more meditative caulking. I will be enjoying myself. :)
****
I don't care if I became totally surrounded by the discontented, angry, and frustrated--I am grateful and contented to have my little corner of the world--a place to rest my weary, aching body--where my creative juices can still occasionally flow--and I and my antisocial gramma-cat can be left in peace. I honestly feel blessed to be here! :):)
Posted by Rita at 8:43 AM

I watched the video of you stenciling the caulk. Now that's pretty cool. Makes such unique cards, too.

I've often wondered why people destroy property. Makes no sense to me. And when you see it right there where you live, it's even more disturbing. Your building looks like a fairly new building, or else it's been renovated recently. Any idea how old the building is?

Hi Alice!
I've had a lot of people ask me how we do the caulking, so now they can watch. :)

This building was only a couple years old when I moved in 5 years ago. Not old--no. Sad, isn't it?

Thanks for doing the caulking video, Rita. I try to check it out when I get a spare chance.

It's a shame that people can be so destructive. Like you say it's a bit like biting the hand that feeds them. Very, very sad but I am pleased to see you are taking a path of gratitude for your own little corner of the world. I wish for you many blessings, my friend. xo

Sometimes I wish it were legal to electrify things so that when people touched something (like that exit sign) they would get a real smoke in the pants shock. Perhaps they could put up some security cams (or watch the ones they have) to see who's doing it.

Of course - the 'illegals' don't really care - but it could be grounds to boot them out.

Hi Serena,
Let me know if you could see the video. Which remeinds me--I have one of Leah using the ScorPal I should upload...;)

Iggy! Iggy! Iggy!
I read your comment to Leah when she was here and we both burst out laughing at the "smoke in the pants shock"!! We loved it!!

Security cameras would cost money. That's what I was told a long time ago when the damages were getting worse and worse. Casual conversation with old office personnel. No wonder we go thru employees, eh? I really feel sorry for them, to be honest. ESPECIALLY the cleaning women!!! :(