One week and here is the new baby on the top of the jar, just like I read would happen. 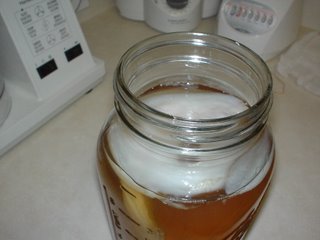 Here's a top view to gross you out--hehe! 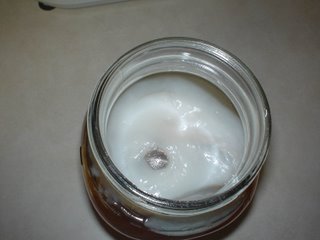 You can see the big mama mushroom hanging sideways in the jar and the baby was just attached at one point--floating all pretty and white. (Beauty is in the eye of the beholder.) 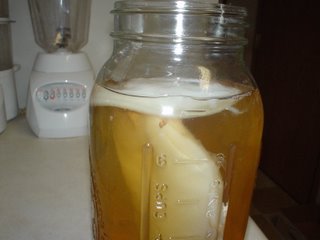 Here's the baby. I decided to be smart and save the first baby as a back up with some of the tea. It is now in the back of the frig in this plastic container. :) 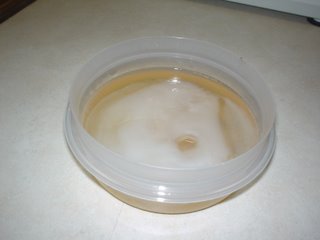 Here's the quart jar of strained tea that came from the half gallon jar. It made this full quart jar and half a cup of tea--all in the frig now. No, I didn't drink any yet. I like it cold! 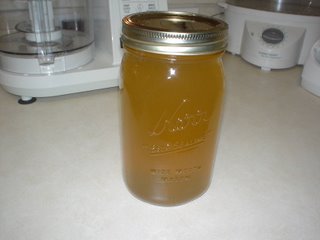 Right now the half gallon jar is clean and waiting with the strainer. The mama mushroom is lying in the zip lock bag way in the background--waiting for cooled off tea water to be plunked into again. This time I made the tea water with brown sugar (used white last time) and the same green tea. 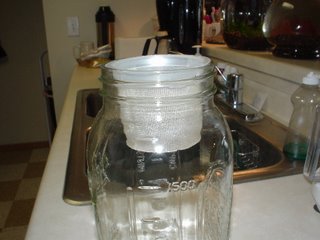 I have been sleeping off and on around the clock. For example--on Wednesday after I saw Dr. Hager (and got my back cracked) I slept from 8pm - 11:30pm. Then on Thursday I slept again from 3am till 8am (had to get up to go see Dr. Sleckman-rheumatologist). Came home from that jaunt and was back in bed by 4:45pm till 8pm. This morning I finally slept from 4:30am until 1:15pm! I have been sleeping pretty well, too! :)

I watched In The Bedroom yesterday:

Set in a tranquil town on the Maine coast, In the Bedroom tells the story of a couple (Sissy Spacek and Tom Wilkinson) whose teenage son (Nick Stahl) is involved in a love affair with a single mother (Marisa Tomei). When the relationship comes to a sudden and tragic end, the boy's parents must face their worst nightmare and embark on a dark, dangerous psychological journey. Spacek and Wilkinson turn in stunning performances.

Was an engrossing movie that drew you in--quietly--until it had you by the throat! One of those movies where the performances were so genuine in such a subtle way--dealt with loss, grief, frustration, and went places you weren't expecting and yet you were. Excellent, but dark, movie--wonderful performances from everybody!

I also have been watching the videos about the Shaklee products. Have watched ten of them so far. I am learning new things. For example--I discovered I have never read my toothpaste tube. I was shocked! My tube of Crest says:

Warnings Keep out of reach of children under 6 yrs of age. If more than used for brushing is accidentally swallowed, get medical help or contact a Poison Control Center right away. Do not swallow. To minimize swallowing use a pea-sized amount in children under six. Supervise children's brushing until good habits are established. Children under 2 yrs: ask a dentist.

All the years I've used toothpaste, I guess I have never bothered to read the tube. I thought they were pulling my leg telling me that there were often warnings about swallowing toothpaste and poison control! Crest--been using it most of my life. Hummm???? It has made me stop and think about the things we use every day that have toxic ingredients in them--and that we absorb through our skin or even swallow.

And this concern about what I am swallowing comes from a lady who is drinking kombucha mushroom tea! chuckle! Yes--I am sipping on it right now. Cold--kind of like apple cider--with a little fizz or a bite to it. Actually tastes better than I remember it! Probably because of using the green tea instead of the black Lipton that I don't really like in the first place. Wonder if it will be better next week with the brown sugar? Experimenting might be more productive than I had expected!