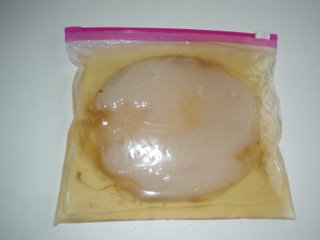 Pretty gross looking, eh?
I am going to go and boil the water, tea, and sugar to begin cultivating a batch of tea after I am done with the blog today. I have only one half-gallon jar left in the pantry. I guess I need to buy some more canning jars--again.
Back when I was making this tea before, about twelve years ago or so, I had the one recipe. There are so many more recipes out on the web now--I was amazed! You can use any kind of sugar--white, brown, raw, organic--and any kind of black or green tea. You can use combinations of the sugars and teas, too. Maybe I can come up with a recipe that will taste better than the old one I had with white sugar and black Lipton tea? I hope so--hehe! Altho, I did get used to the taste of it after while. You don't drink an awful lot at a time. I read that if you drink some before each meal it is supposed to even help with weight loss??
And now I know to keep an extra baby or two in the frig--in a cup of tea like you see in this bag I got today. I didn't know to do that back then and my mushroom went bad in the summer heat (mold). Now, I will be prepared and have back-ups. They are supposed to keep in the frig--almost like in suspended animation--hehe!
Leah has been feeling better already on the Shaklee. She said she hasn't had the gurgly, upset stomach that she had on the other supplements. She has had more energy and isn't hungry before her morning break at work anymore after putting the daily protein powder in her milk with her morning cereal. She's already happy enough with Shaklee that she's talking about getting a website and selling it! We kind of figured she would feel better and would want to sell Shaklee--but weren't expecting her to feel better this quickly! :):)
Last night I watched Shattered Glass:
This fact-based film depicts the rise and fall of disgraced journalist Stephen Glass (Hayden Christensen), who was a staff writer at The New Republic and contributed stories to Rolling Stone and other magazines. Glass fabricated many of his stories, which led to his downfall. Steve Zahn plays the Forbes.com technology reporter who uncovered the truth about Glass's deception. Chloe Sevigny, Hank Azaria and Rosario Dawson also star.
Was really interesting because this was true, of course. They had an interview with the real guy on the Special Features on the DVD. I almost wish I had watched that first, because you get to see him close up--how he can look so earnest and sincere while he lies. I am surprised that there isn't some law that is broken by lying in the press? Glass just graduated with a law degree... ?
And I watched Inside Man:
Dispatched to a crime scene where a bank robbery is in progress, police detective Keith Frazier (Denzel Washington) hopes to apprehend the cunning thief (Clive Owen) so he can make his case for a promotion. But when a savvy negotiator (Jodie Foster) with questionable motives arrives on the scene, an already unstable situation threatens to implode. Spike Lee directs this tense action-drama co-starring Willem Dafoe and Christopher Plummer.
This description dosen't give you any clue as to how unusual this bank robbery is! There were twists and turns in the story line--definitely not your run-of-the-mill bank robbery movie! Much better than I expected it to be!
My rib pain is a little better today so far. But I am still not up to much yet. I think fixing up the baby mushroom a new home and making dinner will be enough--and I will watch what I lift and how. I will be so glad when I can get to the new chiropractor! I sure hope he is really good, experienced, knows what he's doing, and can fix me right up.
I am also watching the Season 5 discs of The Sopranos. I think that is the last season currently available on DVD. Then I'll start ordering the rest of the seasons of Six Feet Under, I guess.
Man! Would I ever be bored without Netflix! It would be a lot more frustrating to have so many hours a day that I can't physically do much of anything (even read!) and not have these interesting DVDs to watch. And I can stop them at any time and take a break and move around and go do something else for a while with my timer--come back and pick up where I left off!
Now, with the rib problem, I try to get to this blog almost every day but it is hard to get to very many emails or Eons, etc. And I have had to give up on keeping up with the online class. Next time they run it I can take it again. The class did give me a kind of shot in the arm, tho--motivation to write this winter. The classes go fast--just about a month and they're over with--so you have to be able to keep up. Wouldn't have been any problem for me in the past--but the "present" me finds it a challenge! If the rib thing hadn't popped up--(or "out"- hehe!)--I wouldn't have had much of a problem keeping up. But, as they say--shit happens! :):)
Posted by Rita at 4:57 PM

That's the ugliest dang thing I've seen in quite awhile!