Okay---this is what has been happening since I got the new humidifier! This white dust settles all over the apartment. Especially clinging to the televisions and the fish tank, but it is all over the surface of all the furniture--just everywhere! This never happened with my old humidifier, but this one is a digital ultrasonic?? Has anyone ever seen this before? I have to wipe things down every day! These pictures show you how much has accumulated just since yesterday!! 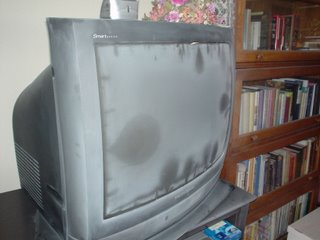 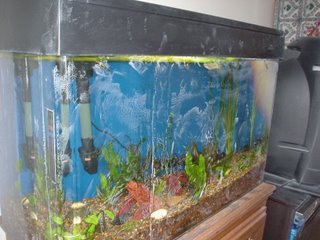 I realize that strange things go on in my apartments--hehe! I have had this greyish reside that accumulates randomly on plastic and behind pictures on the walls, anywhere where items touch the walls, etc, ever since I started practicing energy work back in 1993. Those of you who know me have seen the mysterious "grey stuff" before. I have moved four times and it follows me wherever I go--so it wasn't the apartment, like I first thought. Even caretakers I asked hadn't seen it before. I'll try to remember to get pictures of some of the grey stuff for you.

Well, now I have this white powdery dust all over the place and wonder if this is a common thing from humidifiers or not? Does anyone have knowledge about this?

Anyways, on a lighter or more normal note--here's the Santa head that drives Karma crazy! She wants to bite his beard so badly! 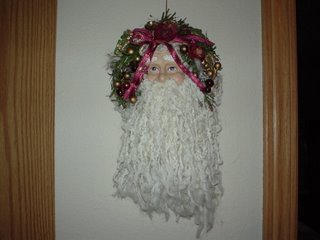 As long as I was taking pictures of things on the walls--this is one of my favorite plaques. I have it hanging next to my front door. I have angels all over my apartment--in every room. Many of them have been gifts. :) 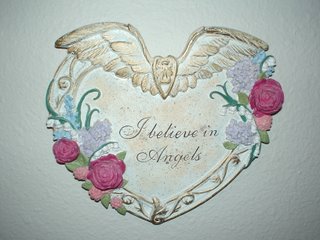 This is my cloth that I bought from the Tibetan monks when they visited Concordia a few years back. Supposed to be made by the monks in exile at the monastery in India and they use them for sacred ceremonies. I have it hanging in my bedroom. Maybe I should bring it to Sacred Circle on Dec 3rd? Duh! Why didn't I ever think of using it for Sacred Circle before? 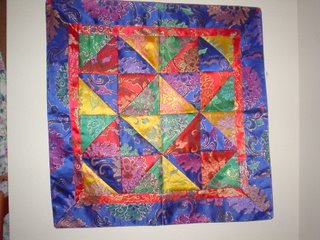 In case anyone was wondering why my blinds are not lowered all the way down at night (in the picture yesterday), Karma gets really undone if she can't see out the windows. She howls and cries and bites the shades--left teethmarks in them when she was a kitten. Apparently she is as addicted to her kitty TV as I am to my people TV. Even if the only thing to watch at 4am are the headlights off in the distance on Highway 29, she wants to be able to watch if the mood strikes her--whenever the mood strikes her. Life is a series of compromises, right?

It was so nice for a stretch there--highs of 40's and 50's. Was 20 degrees this morning at 10am. The warm spell must be over. Which means--Karma begged to go out, discovered it was really cold out there, and she's been bitchy & wild ever since she came in. chuckle!

Meanwhile--my DVD player doesn't work--at all. After emails to Leah and Dagan--I found out that the laptop does work to watch DVDs. TaDa! Thank Goodness! And I found out that I can watch movies on my desk computer, too. I had no clue. Duh! (Dagan and Leah find me constantly amusing!) But, now I do need a DVD player, eventually, in order to watch a movie on the bigger screen in a comfortable chair. Dagan said he was going to Best Buy yesterday and would look to see what they had for cheap DVD players. I told him I only see one place to attach one cord (Cable) to the TV and I need the VCR to work, too. He said he could hook it in thru the old one (VCR still works on that one). I only hope I can tape and still watch something else at the same time?

Well, anyways, that's the Fargo report. If anybody has seen this white dust before--or the grey stuff, for that matter--let me know! :)