I missed a photo yesterday that Leah took at the Stamp Expo that demonstrates the flower punch we bought. It punches one side of the image and you fold it over for the 3D effect. On this card they did some glitter glue on the bare white paper showing from underneath. If you didn't layer it like they did here, you'd have the holes--another way to use the punch. Our new leaf punch works the same as this one does. The butterfly one we bought is a regular raised punch and cuts both sides of the butterfly--really pretty. I will try to get pictures when Leah and I make cards on Wednesday. :) 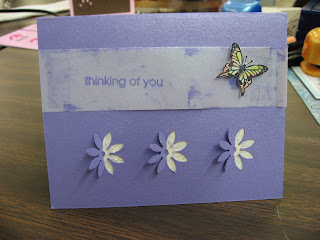 Last night I watched The Iceman Cometh--a play produced back in 1973 when Lee Marvin was in his prime and now has been transferred to DVD:

Part of the American Film Theatre series, this adaptation of Eugene O'Neill's play takes place in 1912 at a shady New York bar. Hickey (Lee Marvin) turns up annually offering free drinks and lively stories to the dismal crowd, who are surprised this time when he arrives sober with a new stance on life. Hoping to liberate the bar's regulars from their meaningless existence, Hickey instead begins questioning his newfound principles.

It was a play that made you think. The men and women (hookers) that hung around this bar were alcoholics and people more or less living at rock bottom. And as drinkers often do, they each had their own "pipe dreams" of what they would eventually do with their lives. In unspoken agreement, they all supported each other's pipe dreams. After all, if the people you know had to face the truth, you would, too. Lee Marvin comes in and wants to force each of them to face what they actually are doing with their lives and who they really are--tries to force them to step into their pipe dreams or forget them and be free of them. They couldn't actually leap in and accomplish the dreams, of course--and it was emotionally destroying them. The "pipe dreams" may well be lies they told themselves to make their lives more palatable--tolerable--but they also gave their lives hope and a last shred of dignity to cling to. Won't tell you how it ends.

But it makes you think about when you are down and out, is it better to know the absolute truth about yourself or not? Isn't it like kicking somebody when they're down? Done the way Lee Marvin did it--sure seemed like it. But, maybe it is all in the delivery? In the manner in which a person faces their demons? You cannot strip a person of hope and dignity. It hurt to watch. And then push them to make a major change they are not prepared for--and not support them--leave them to their own devices--to sink or swim on their own in alien waters. It was like Lee Marvin's character wanted them all to fail? He had his own problems, true--but his character seemed so cold and distant.

I, personally, feel that if you interfere with a person's life--that is a huge responsibility. It is one thing if somebody asks your advice or opinion, but another thing altogether to force your opinions onto somebody else. Just because one person goes through something, doesn't mean another person will have the same experience going through something similar. Everybody is different. And there was little love or kindness in Hickey. I don't know if that was the way it was supposed to be played or if that was Lee Marvin's or the director's take on it.