The critter order came yesterday. Everybody got something special. Miss Gracie got her new, larger, and much gaudier mirror. She was afriad of it for like 5 minutes--till she saw the glint of her boyfriend's eye--hehe! 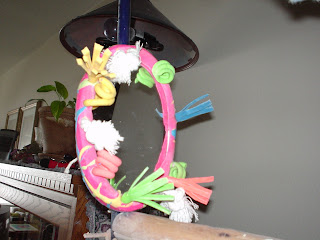 The fish even got a little something-something, too. 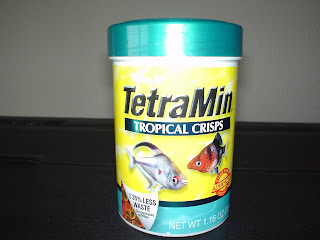 Karma was very interested in the new bouncy toy with a little ball on one end (even tho it doesn't bounce very well) until "da bird" came out of the package! 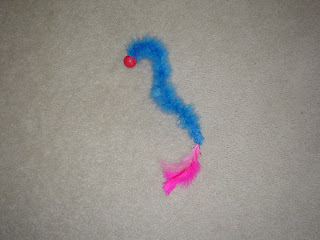 She cried and made those I-want-to-kill-it noises in her throat. I made her race around... 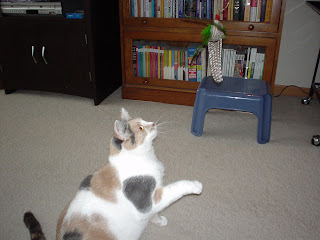 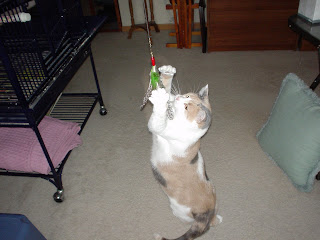 ..until she was panting and so tired she couldn't get up off the floor! 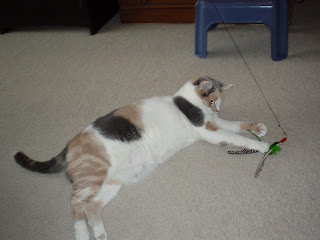 We did it again today, of course. And then I put it away. I don't want her biting the string off like she did with the first one she had when she was a kitten. We've tied other things on to the first pole with string ever since, but it is not the same. They use a fishing wire and I think a lure clip. I also bought Karma the three extra toys, too, for "da bird", but the feathers are her favorite. I am not sure if it is a good idea for her to be chomping on feathers. When she was a kitten I took the feather toy off and used something else. But, since she knows Miss Gracie is a part of the family now--I will take my chances. Karma never goes after Gracie when she hits the floor like she goes after this toy--so I believe they will still be okay. Gracie landed on the floor today, as a matter of fact, and Karma just came close to her and stared--like usual.
Yesterday afternoon I lost the Internet--off and on, mostly off--all evening. This morning--same thing. So, I called Dagan. He had me unplug and plug in the router first--and that was okay. So, then I called Cable One Net and they had a guy come out this afternoon. He did find some connector downstairs in the building that was really poor and my connection was better after he replaced it. Everything checked out with the cable company--so now, if I have troubles again--it is probably my modem or the internet card. BUT--funny--once he got everything working okay--then Yahoo was down! I could get everyplace else on the Internet, but not Yahoo. So, right now--I thought I'd blog the pictures since I can't check my email--hehe! Always something, eh?
I watched the end of season two of Carnivale yesterday:
Daniel Knauf's rivetingly creepy series continues to document the adventures of a motley crew of carnies who've made the Oklahoma Dustbowl their home in the 1930s. This season, Ben Hawkins (Nick Stahl) faces up to the fact that he may have been bestowed supernatural powers by a force he doesn't quite recognize. But that's not all that's happening in this strange town where the strange trumps the ordinary and wickedness permeates every event.
They didn't know they were being cancelled, so the battle between good and evil was still in progress. Was such a compelling show--too bad they didn't get to end it properly. I am still glad I watched it and was glued to each episode.
Last night I watched a very uplifting little movie called Saint Ralph:
Ralph (Adam Butcher) is a typical teenager with atypical questions, the largest of which concerns his mother. She's fallen into a coma, and the 14-year-old has set his sights on winning the 1954 Boston Marathon in a makeshift barter with God to make his mother well. His teacher, Father Hibbert (Campbell Scott), wants to encourage his dream, but in doing so, he goes up against the reserved, ever-realistic Father Fitzpatrick (Gordon Pinsent).
Well, I hope that I can post this blog and get to my email some time tonight. :)
Posted by Rita at 3:41 PM