I have to show you this! These two plants have taken over the aquarium!! The top is covered with twirls and twirls!! I think it is so funny--oddly compelling to look at--but it is cutting the light off for the ones beneath. I wonder why my tanks always seem to have a dominant plant that trys to take over the whole aquarium? 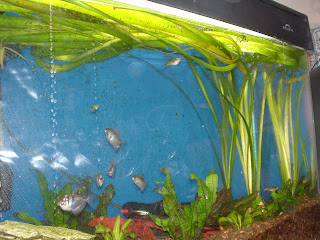 Meanwhile--Karma is in seventh heaven! There is snow on her porch! The most we've had all year. It catches in the screen and falls inbetween the velcro strips. 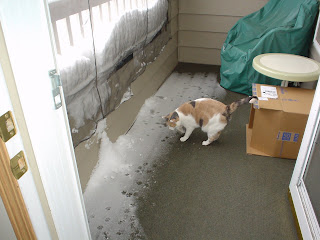 She likes to jump up and hit the snow caught in the screen and knock it down--and eat it, of course. Oh, the little joys in life! :) 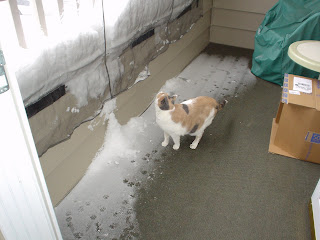 Mary Lou emailed me yesterday and we set up a call at 9pm (she is more "with it" and has a cell phone). Was so nice to hear her voice!! She had been concerned about us driving down, too--and said that the food she got was frozen or she would ues up. They are expecting maybe another foot of snow by the weekend, so it is nice not to have to worry about traveling in this mess.
It has been snowing steadily since yesterday here. Supposed to keep accumulating thru tomorrow and now instead of 3-6 inches they are saying that we could have up to 11 inches over the three days? So, Minneapolis might get more than they thought, too--who knows? It is beautiful, tho. Leah emailed this morning about how pretty it looks coming down. We have bigger flakes this time. So often with the winds up here the snow comes down almost parallel to the ground--hehe! Nice to see it coming down at a 45 degree angle, Leah said--chuckle! True! True!
Yesterday morning I was sitting up in bed with my laptop on its rolling table, as usual, doing my morning pages--Karma came demanding her lovin' up time across my chest, as usual. She was having a hard time getting comfortable and I was afraid she'd step on the keyboard--so I flipped the end of my body pillow on top of the keyboard. Karma stepped around on the pillow and settled in for a cuddle session. I looked up over her back and saw that my laptop screen was completely inverted--upsidedown!!?? I didn't even know such a thing was possible! ??? Had to call Dagan last night and ask him how to fix it. He looked it up and said to try hitting ctrl--alt--and the up arrow at the same time. It worked! How Karma managed to hit a series of three keys at the same time thru a pillow--well, it defies logic! hehe! The bigger question for me---why would anybody want to invert their screen in the first place? Why is that even possible?
Anyways, the Shaklee order is supposed to arrive this afternoon. I'll call Leah when it gets here. She has the Valley Video cigarette run tonight (part of her second job). I hope the driving isn't too awful. She'll stop by here after she's done 7ish--maybe 8ish with the roads being bad.
Have a good day. If you are traveling in bad weather, drive slowly and carefully--and may your angels watch over you. :)
Posted by Rita at 10:17 AM