Karma! Karma!
Took her with me in her stroller to walk out the stroller box to the dumpster yesterday. At first, as you can see below, she just tried to push her way out with her head--but she was quiet. I think she was so shocked when I actually rolled her out the apartment door that she remained quiet almost all the way down the long hallway to the elevator. But then she started to cry. She cried all the way to the dumpster and back. Inside, outside--she just cried and cried. Just like when I hauled her out in her carrier before. She is just not happy when she's not at home, eh? I think it could be more the movement than anything. ?? 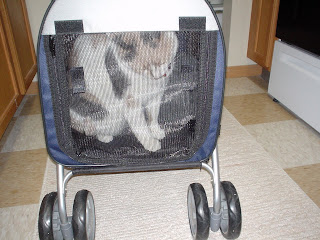 I had a request for a bookcard made with the packing paper/embroidery thread clippings paper. Made up one for you, Ruby! :) Working on filling it up right now! 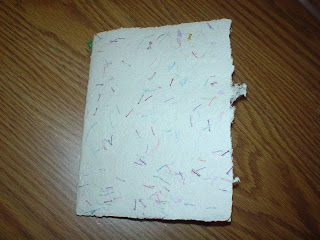 I have been slowly working on the smelly latex--am up to seven layers. I need about ten layers--have to let them dry inbetween. Good puttery project for me. You can see the sample one Leah made of the dragonfly on the left. 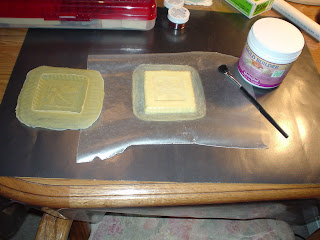 Then we'll pour some Plaster of Paris in these latex rubbery casts to make moulds. They don't have the sharp detail that the originals do, but I think they'll work just fine? We'll see. I just wanted some extra snowflakes when I make up 60 Christmas cards. That latex stuff is really stinky--but it works. We have to be extra careful with the Plaster of Paris moulds because they will crack and break easier than whatever they make the originals out of. That Leah--she comes up with the ideas, doesn't she? :)

Yesterday wasn't very windy--my direction anyways--and it was sooo nice out. Low 60s, but felt warmer than that awful windy day when it was supposed to have been 70 degrees out for the first time. Had the porch doors wide open and actually even had the living room windows open for a spell--first time this year! :) Beautiful day again today! I'm washing clothes.

Tomorrow morning Leah and I are going over to Moorhead Mall. They're having a "craft" garage sale. Anybody can rent a table for $5.00 and bring all their unwanted craft supplies up there to sell. Only runs four hours (10am-3pm)--and we're going to try to get there as close to the beginning as we can.

Leah and I actually rented a table several years ago. First time I ever got rid of a single rubber stamp. And I have been collecting them since high school--before they were popular and there was such a thing as a stamp store--hehe! Anyways, I might find something I can use for birthday or Christmas cards--or who knows what else? One Man's Trash, right? Will be fun! Later....